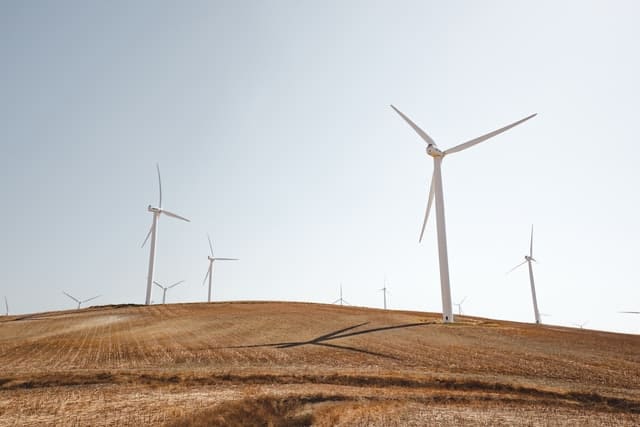 Domestic crude oil, natural gas, and coal sources are limited within the EU. Some member states (i.e, Malta & Luxembourg) import up to 90% of their energy.

The EU is unlikely to simply switch supplying countries, thus leaving energy supplies outside their control again. However, European manufacturers and service suppliers must all contend with a new set of unknowns. A continuing conflict in Ukraine is bringing changes in supplies of components and raw materials. The war is impacting not only wheat supplies but also Europe’s supplies of computer chips. There are also potential costs in so quickly abandoning fossil fuels.

That said, what companies might benefit from this rapid push away from Russia and toward what must be a greener future?

Europe’s New Green Deal Firmly Back on Track (for Now)

Coal and gas reserves vary wildly from country to country within the European Union. In 2020, EU production of primary energy was down by 17.7% from a decade before and 7.1% lower than in 2019. In the ten years up to 2020, European renewable energy use increased dramatically while uses of other sources declined. The EU’s recently agreed “Green New Deal” aims to make Europe carbon neutral by 2050. It included a €40bn fund to help coal-reliant regions, like Poland, move to cleaner alternatives

Which Companies May May Benefit From These Moves?

The EU’s Green New Deal focuses on transportation, energy production, agriculture sustainability, and improved energy efficiency in buildings. Some companies, like Baywa, work in several sectors that may see increased business because of Europe’s moves away from Russian energy reliance. Companies in energy production and transportation may be most likely to benefit quickly from the energy policy change.

Another company that may benefit is Switzerland’s Meyer Burger Technology AG (OTC: MYBUF), which has a focus on solar cells and photovoltaic equipment. Germany’s Baywa (ETR: BYW6) has a focus on agriculture, renewable energy, and construction, all sectors which will be impacted by Europe’s move away from imported fuels. Baywa’s agrovoltaic development center is already working with farmers on pilot projects.

Companies providing goods and services to the public transportation sector and those with increasing production of electric vehicles have growth opportunities from this change. Alstom (EPA: ALO), the French company focused on rail infrastructure, recently acquired the rail division of Canada’s Bombardier. A renewed focus on public transportation could improve Alstom’s fortunes.

Many companies that produce electric vehicles already have long waitlists for their cars, SUVs, and trucks. Volkswagen (OTC: VWAGY) is increasing its electric vehicle production substantially in Europe, while also providing the technology for the seven new electric models that Ford (NYSE: F) will introduce in Europe by 2024.

Any of these stocks that might benefit from the EU’s decision to be independent of Russian energy will, of course, be subject to the whims of market movements. They also are dependent on the availability of raw materials and specific components. Battery improvement and production will underpin both energy and transport improvements.

Mercedes’s (OTC: DDAIF) corporate plan has been to produce only electric vehicles by 2030. To that end, the company has recently opened a battery plant in Alabama, while also taking an equity stake in European battery cell manufacturer Automotive Cells Company. Mercedes is partnering with Total Energy and Stellanis (NYSE: STLA), owner of Peugeot, in that venture.