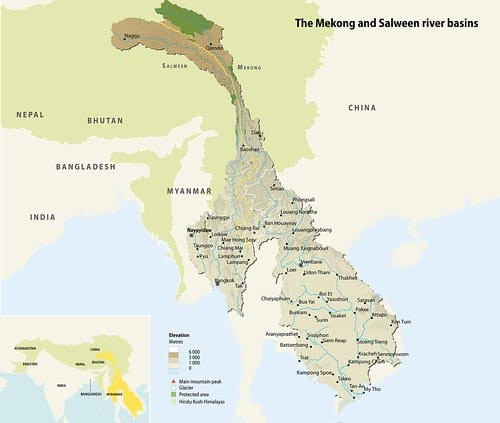 Drought has prevailed from Myanmar through Vietnam for months. With the Mekong River at some of its lowest levels in decades, monsoon rains began in parts of SE Asia in June.

Starting in Tibet, the Mekong winds through six countries: China, Myanmar, Lao PDR, Thailand, Cambodia, and Vietnam. 60% of the population along the Lower Mekong make a living from agriculture. Over 70% of the water that is used from the lower reaches of the Mekong is for agricultural irrigation.

The 2020 Drought for Mekong Countries

This year the river’s water has been scarce, making the drought worse for agricultural commodities and life in general. Called the worst in 40 years, this year’s drought comes after the 2018-19 season was marred by drought, low Mekong levels, and a truncated monsoon season.

The Thai Meteorological Department declared that 2020’s rainy season officially began May 15, but expects water for the first two months to be insufficient for farmers. Irrigation water is scarce. The Thai government has started projects to tap groundwater for irrigation and household use.

While the drought led to seawater incursions in Thailand, and saltiness in Bangkok’s drinking water, in Vietnam’s Mekong Delta, one of the country’s “rice bowls”, saltwater incursion has reached record levels. Vietnam has directed farmers to switch to other crops from rice in some parts of the Mekong Delta since freshwater is so scarce.

By May, 27 of Thailand’s 77 provinces had been declared disaster zones. The drought has been blamed on El Nino, but this did not explain the extent of low water levels in the Mekong.

Perhaps the country that will be most impacted by drought and low water levels is Cambodia. Its Tonle Sap lake is a unique environmental wonder. In the dry season (October to March) its river provides 50% of the water flow into the Mekong Delta.

At the monsoon’s heights, waters from the Mekong make the Tonle Sap River flow backward, into the lake. Fish caught from the lake make up 70% of the protein intake for Cambodians. In 2019, the fish catch was 80-90% lower than normal. What that catch will be this year is anybody’s guess.

Weather along the Mekong, and the waters of the river itself, plays a large role in several global commodities markets. Thailand is the world’s largest rubber exporter and the second largest exporter of cane sugar and rice.

Vietnam produces 36% of the world’s robusta crop, more than twice that of its nearest competitor, Brazil. Vietnam also is the third-largest rice exporter and fourth-largest rubber exporter. Myanmar and Cambodia also contribute to the global rubber and rice trade.

Vietnam has seen up to 30,000 hectares impacted by the drought in the Central Highlands, the country’s largest coffee-producing region. Last year’s drought led to a 14% drop in coffee exports. Saltwater intrusion and low water supplies in the Delta also likely will impact rice harvests. However, the country expects to export more than last year due to existing stocks.

Water Is Traditionally a Shared Resource

What China, which controls the upper Mekong, seeks from the river, however, is not increased agriculture production. It wants electric power. Eleven hydropower dams now operate on the upper Mekong.

Many observers feel that China views the Mekong as a “sovereign” water source, one which they should control since it begins in Tibet. Other Mekong countries have been developing shared plans for its use, with varying degrees of success, since 1957, with the formation of the Mekong River Commission. As part of its Belt and Roads initiative, China started the Lancang-Mekong Cooperation mechanism in 2015. (Lancang is the Chinese name for the Mekong). A key goal of the mechanism was creating a five-year development plan for the river, which included more dams. It also included destroying rapids on the Laos-Cambodia border. This would enable China to ship goods from inland Yunnan all the way to the Pacific.

The current dams meet China’s power needs, but some commentators posit it is holding water back for future power and agriculture needs. A recent study held that China withheld water from the lower Mekong for six months in 2019, even though it had abnormally high rain and snowfall that year. By January this year, normally turbulent stretches of the Mekong were dry in Laos and Thailand.

The lower Mekong region’s current water problems are a combination of climate change, weather, and damming the river. The Lancang-Mekong development plan has been only partially successful. China has agreed to share data on the river with downstream countries, and at least one dam, in Cambodia, has been put on hold. The region will have to wait through the rainy season to see if the river starts flowing again at its normal levels.