The March “Lamb” Heads Out – We Focus On Three Commodity Developments: Energy, Wheat and Cocoa.

EUROPE’S BEAST FROM THE EAST

The warming Arctic this winter has resulted in incredibly cold weather in parts of Europe and Northeast Asia. Another symptom has been  unusual March snowstorms in the Northeast U.S., the likes of which are unprecedented. Although four Nor’easters have clobbered the Eastern U.S., I do not agree with the forecasters who attribute this to La Niña.

Once again, the “warming planet” signals are the handwriting on the wall. They read “the Arctic is warming” and “the Atlantic ocean temperatures are rising.” As far as the energy markets are concerned, the UK natural gas futures contract reacted extremely to the cold weather. The U.S. has not had nearly the consistent cold winter as observed in Europe. The negative NAO. Index (warm block near Greenland) and warming near Alaska (negative EPO) have resulted in this “Beast from the East”. For more information about this incredible European cold and some changing feelings about global warming,  Please click the following link: Here 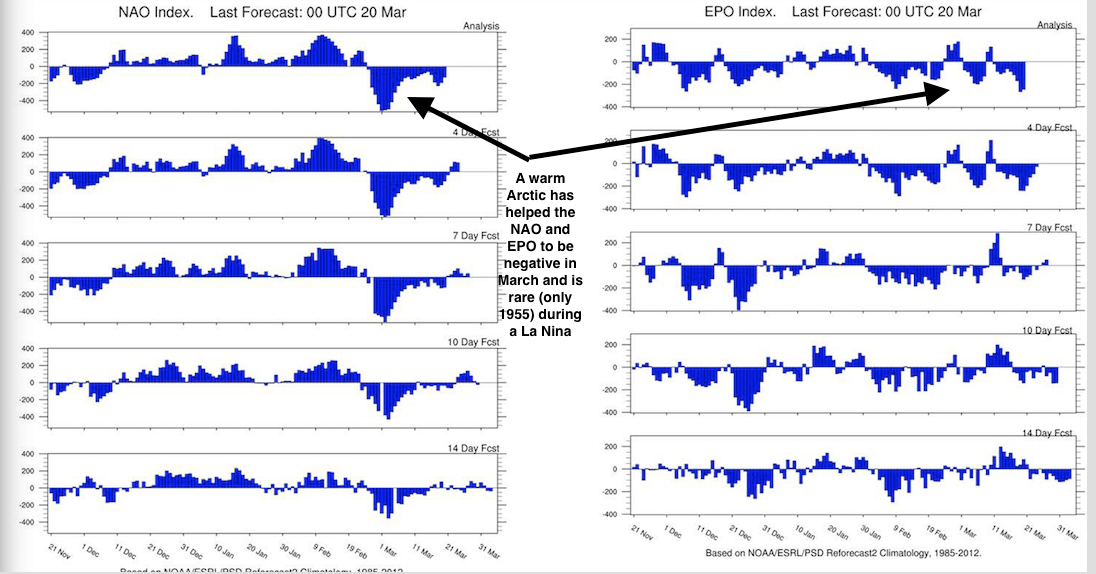 a rare coincidence of the NAO and EPO indices

Wheat prices have had a steady climb during January and February, as the chart reveals below (right). However, it usually takes some other weather disaster somewhere in the world to have a longer term bull market in wheat prices. Two fundamental factors are brewing in the world of wheat:

a) The U.S. has not been competitive in the world market, and

b) Russia is sitting on huge global stocks.

These realities began to increase wheat market volatility long before we changed our forecast views presented to private clients on March 15th. We issued a heightened alarm for a potential easing of the Plains drought.

Due to weather factors not related to La Niña, there has been a precipitous drop in wheat prices.

CLIMATECH (below) shows how the present La Niña is similar to 1955. Back then, “normal” dryness continued in the Plains wheat areas (red). Based on these teleconnections below, this should have happened. However, computer models, along with our forecast, began changing on March 15th. This prompted us to alert private clients about a potential change in wheat price direction. If you would like more information, please email us at 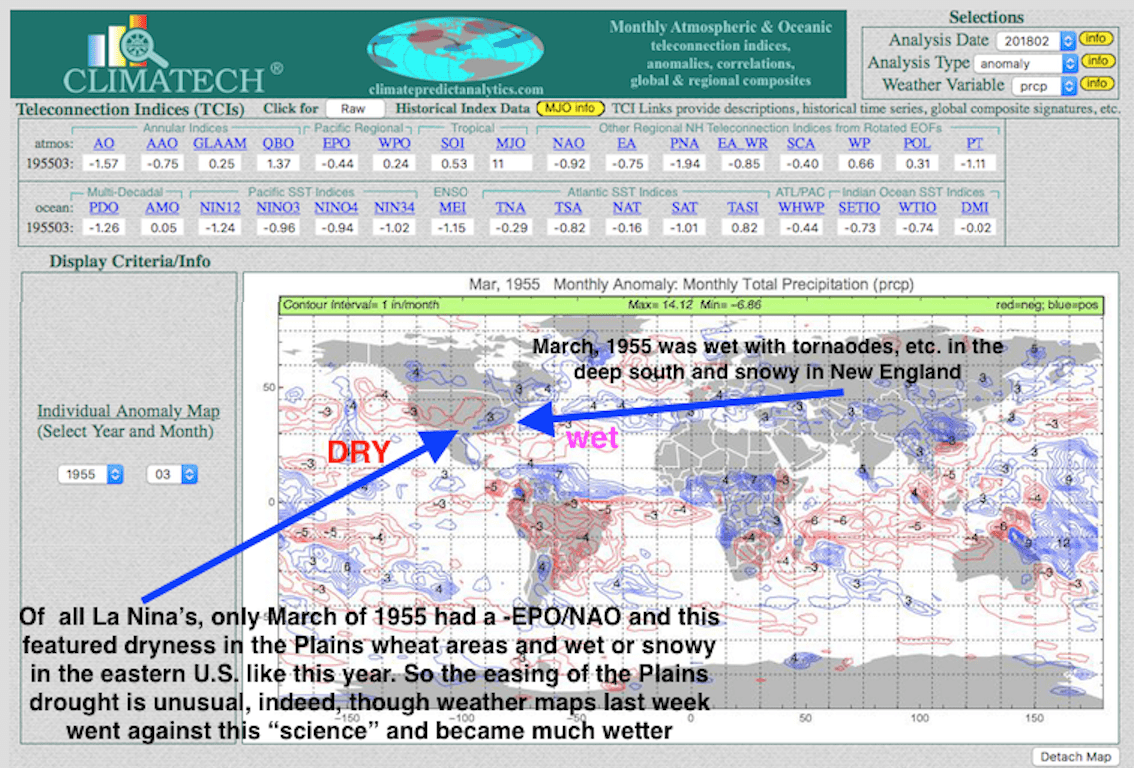 As wheat prices have taken it on the chin, one of the lone bull markets in agricultural commodities recently has been in cocoa. Dry, hot weather did cause some minor reduction in the west Africa cocoa crop this winter. This is quite is unusual for La Niña. However, the main reason for the bull move is far too many short futures positions. This high level of commercial hedges are bumping up against rising global demand. In addition, there is press coverage pointing out that cocoa farmers in Ghana will see lower production in coming years due to the “illegal gold mining boom.”

Here is an excerpt from the current issue of National Geographic:

“Gold mining has always been a part of Ghana, from the ornate jewelry of the Ashanti kings to British colonization. In the last several years, largely unregulated galamsey (informal, illegal) mining has ramped up, due in part to Chinese investors who bring in sophisticated equipment and a lagging economy that makes the prospect of striking gold too sweet to pass. These often illegal operations can result in contaminated water, deforestation, and a rise in violent crime.”

“In 2011, Ghana produced a record-setting amount of cocoa, weighing in at over one million tonnes. Since then, as illegal mining steadily ramped up, cocoa production has trended downwards, with a drop to 740,000 tonnes in 2015.”

For the full, interesting article about this from National Geographic, please click here

A galamsey, derived from the phrase “gather them and sell”, is a local Ghanaian term which means illegal small-scale gold mining in Ghana, West Africa; such workers are known as galamseyers or orpailleurs in neighboring francophone nations.