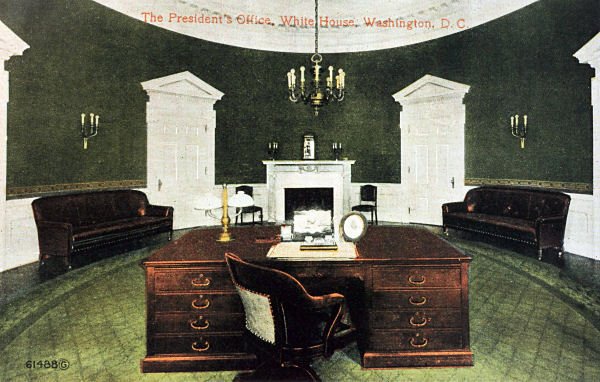 3 Guys Step Into the Oval Office

The title may sound like the first line of a joke, but this is about the environment.

Environmental Destruction is No Joke

The following brief dissertation is not a joke, but there is a joker in the narrative. See if you can spot him. 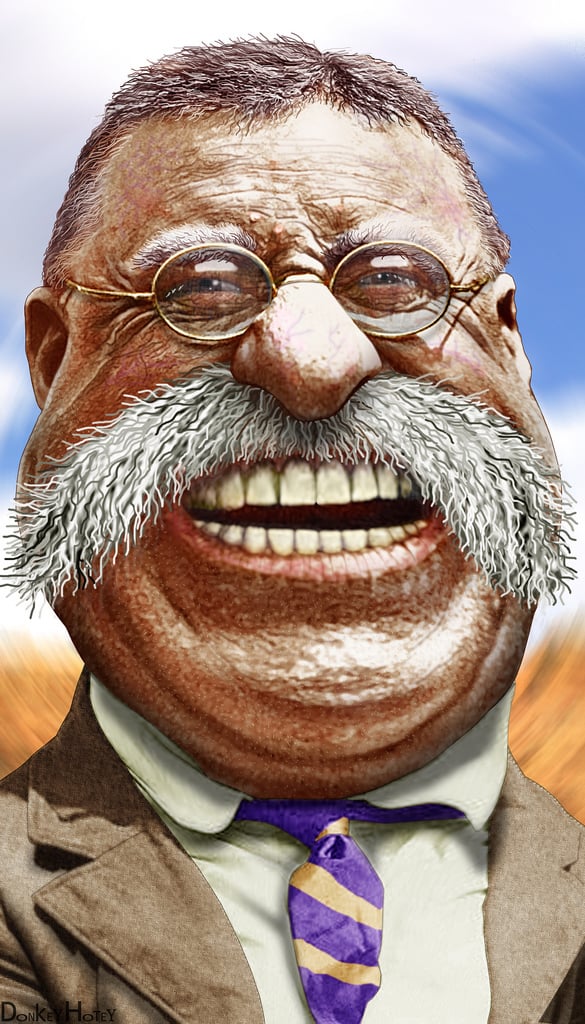 “Teddy” was an avid outdoorsman, as well as an author, explorer, naturalist, conservationist and soldier. Having lead the Rough Riders in the Spanish-American war, he returned home as a war hero. He was elected governor of the state of New York and then as William McKinley’s vice president. Subsequent to McKinley’s assassination, Roosevelt became the 25th president. Upon entering the Oval Office, he went straight to work on the environment. In addition to setting aside 230 million acres of public land as a sanctuary from the forces of modernity, he created the United States Forest Service, and established:

Theodore Roosevelt, at the age of 42, was the youngest person to become US president. 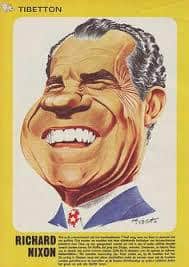 Nixon, who started out practicing law, saw active duty in the US Navy Reserve during World War II, and became a career politician. He was elected to the House of Representatives in 1946 and to the Senate in 1950. From 1952 to 1960 he served as Dwight D. Eisenhower’s vice president. In 1968 he was elected the 37th US president. In 1970 he created the Environmental Protection Agency (EPA) whose purpose, among several others, was to enforce air-pollution laws. The law’s intention was to reduce the emission of six common pollutants:

Richard Nixon was the only US president who left office by resignation. 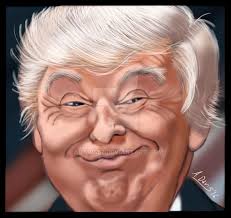 Before he became a presidential aspirant, the real-estate developer and reality television personality, Donald Trump, tweeted (2012), “The concept of global warming was created by, and for, the Chinese, in order to make US manufacturing non-competitive.” Since entering the Oval Office, in one year’s time he presided over events covered in the following headlines:

Donald Trump, at the age of 70, was the oldest person to become US president.

And the Joker IS? 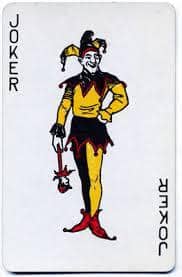 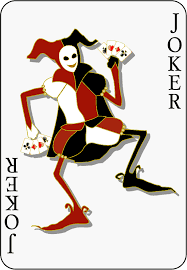 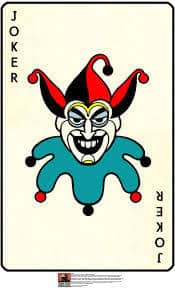 By his own admission, Donald Trump is a joker. Trump told Fox & Friends:

“Well, I think the climate change is just a very, very expensive form of tax. A lot of people are making   a lot of money. I know much about climate change. I’d be — received environmental awards. And I often joke that this is done for the benefit of China. Obviously, I joke. But this is done for the benefit of China, because China does not do anything to help climate change. They burn everything you could burn; they couldn’t care less. They have very — you know, their standards are nothing. But they — in the meantime, they can undercut us on price. So it’s very hard on our business.”

Politico.com is the source for the above Fox & Friends transcript from an interview on 1/18/2017.

(Scroll to bottom of blog space for other credits)

But first… AND NOW, FOR SOMETHING COMPLETELY DIFFERENT:

The global community of Wikipedia contributors 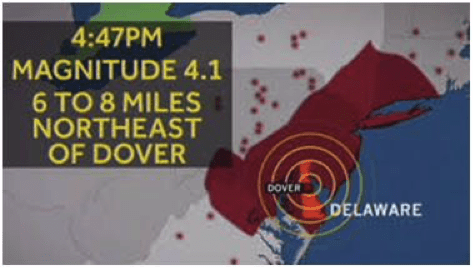 The November 30th Delaware Earthquake – was the coming SUPERMOON the culprit?

It was the strongest quake ever measured for the state of Delaware. Is it possible that the Super Moon*  (expected three days later on Dec. 3rd) was, in some way, a catalyst?

A dozen years ago (5/23/2005), National Geographic stated some statistics and then asked a rhetorical question:  The moon’s orbit is inclined in relation to the Earth, causing the moon’s position in the sky to nod north and south on an 18.6-year cycle. Is the observed correlation between the moon’s position in its 18.6-year cycle (or any other lunar phase) and earthquake activity a coincidence or something more? 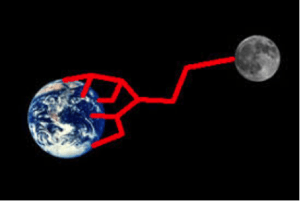 “More Evidence that the Moon Contributes to Earthquakes”

On the other side of the coin, a continued search using slightly different wording spits out these hits: 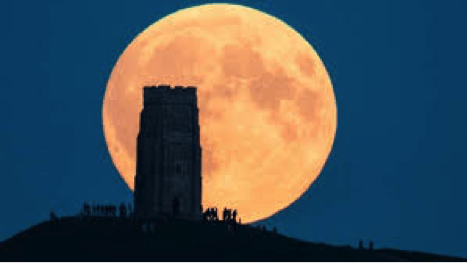 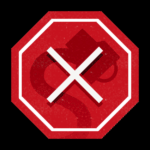 “Just to be clear: The Moon did NOT cause the earthquake in Japan” 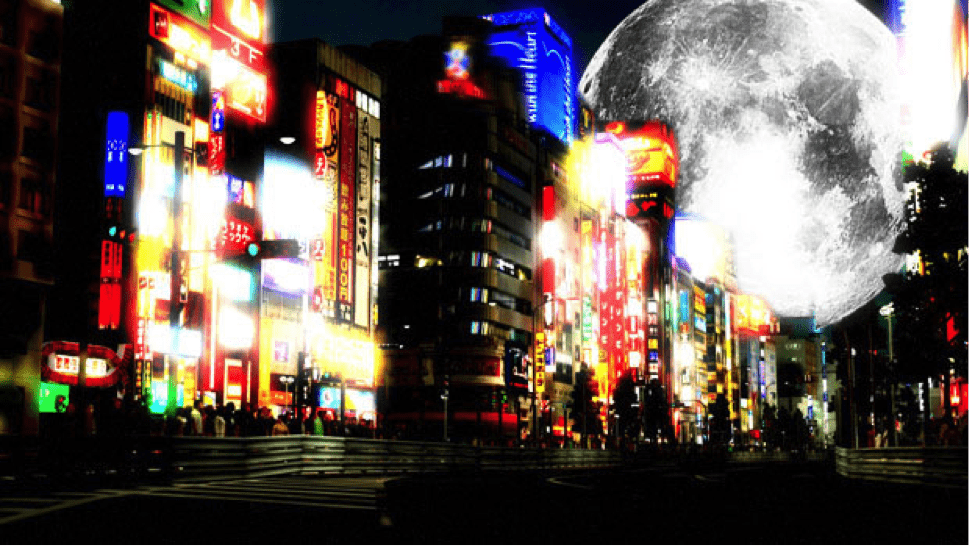 Well, the way I look at this … it ain’t the lunar phase that matters, it’s the perigee… just sayin’

Scott Mathews is one of our guest bloggers. He is the Director of Alternative Investments at The Dow Corporation. 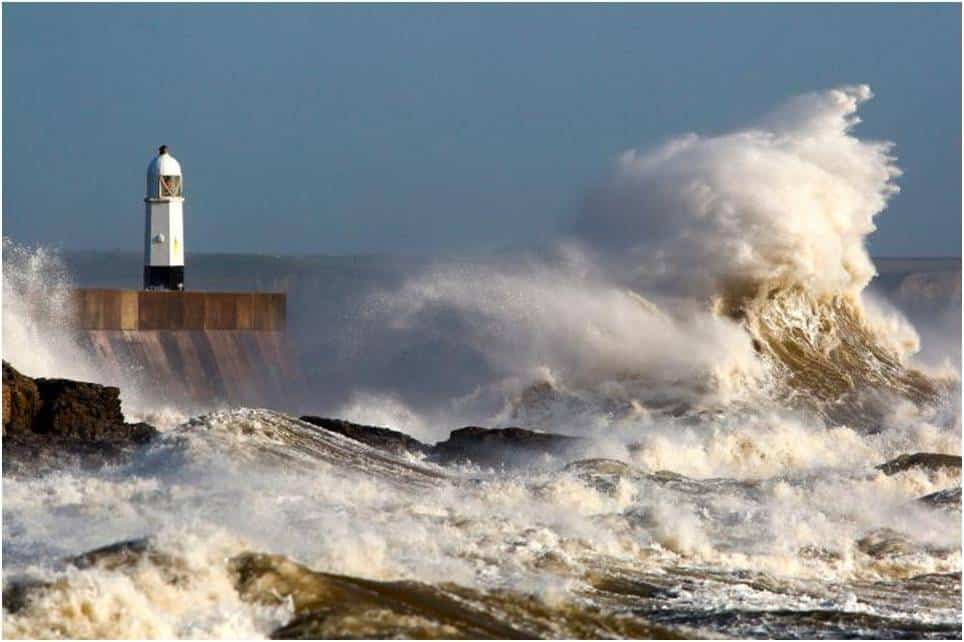 HURRICANE OPHELIA: Was Mother Nature having a bit of fun with us?

The National Geographic website ran a story on October 16 about the extraordinary attributes of the tenth named storm of the year, Ophelia. The author, Elaina Zachos, wrote:

”Cyclonic winds kicked up dust from the North African Sahara, spraying sand into the English sky. From there, the desert dust scattered the sun’s rays into longer wavelengths, giving the sky an eerie, somewhat-apocalyptic hue.”

It was an event for the record books, but the records weren’t about casualties, wind speed, rainfall, storm surge. The big story was not one of how many people lost power or were displaced. Headlines did not focus on the cost of damages. The notably weird phenomena generated by Ophelia included Ireland’s first severe weather alert in history. In addition, an unusual spate of wildfires were spawned by the powerful winds that fanned the Iberian Peninsula. The Portuguese and the Spaniards could not recall ever seeing such events before, nor had they ever heard of such from their parents and grandparents.

The scientific discussions mostly concluded that the warmer Atlantic must be the culprit. Ah…climate change rears its head once more! The topic just won’t go away.

It occurs to me that, if Mother Nature happened to be a “real person” she might have a sense of humor. If so, she might, from time to time, play around with our heads, to make us wonder what’s really going on. In normal social interaction, that could prompt some to launch a counter punch, i.e. to “get back” at Her, in a sense. Well, human meddling with the environment isn’t the right way to respond. This brings up a recollection of an old TV commercial that was very silly, having to do with Mother Nature. It actually has nothing to do, whatsoever, with Hurricane Ophelia, or with weird weather. I just thought I’d give readers something to ponder, and perhaps make you laugh. Enjoy!

Margarine is produced from corn oil… hey, I knew I’d bring the subject back to commodities!!! 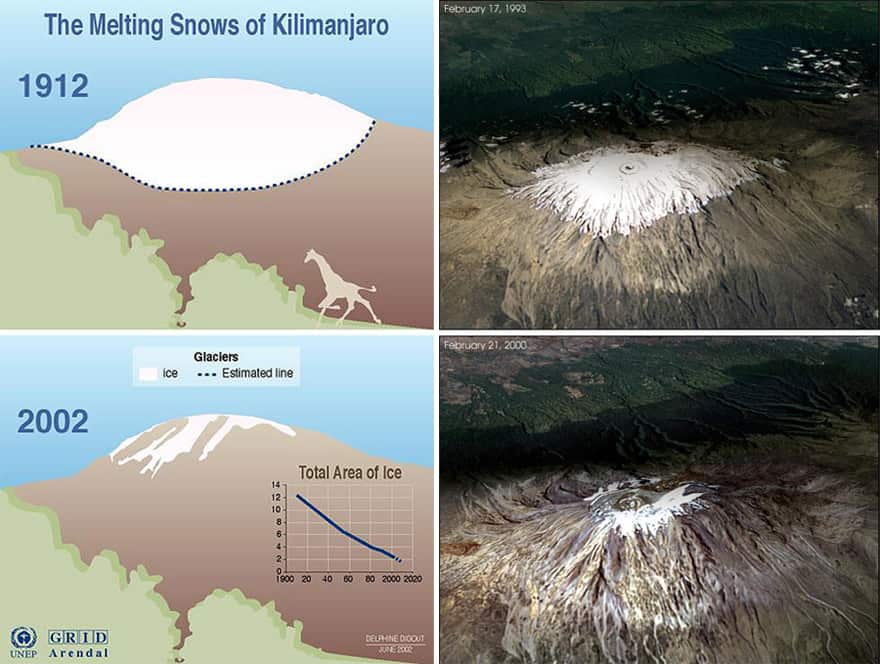 It is often quoted. You’ve been hearing it or reading it for years. Politicians and business celebrities use it in their opening lines. Motivational speakers woo their audiences with it. It is the proclamation that the Chinese character for “crisis” is a formation comprised of two characters: one signifies “danger” while “opportunity” is the meaning of the other.

Check it out at your favorite online research source, and you’ll find that this story is nothing but Fake Etymology (bogus word origin).

Even if it isn’t precisely true, the concept actually does make philosophical sense. When confronted with a crisis, you have the choice of three ways to perceive it: as a danger, as an opportunity, or as both.

Perceptions of the climate situation also fall into three camps. Some see a dire threat that only humans can stop, whether they created it, or not. Others see a natural cycle that swings like a pendulum throughout the millennia. In the third camp are the opportunists, who see profit. 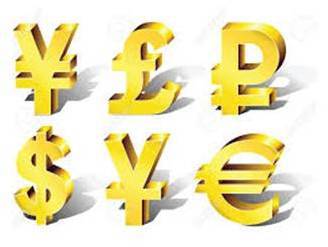 The term “climate change” can conjure up a wide range of thoughts and emotions. Euphemisms applicable to climate uncertainty are clichés. Is the glass half full or half empty? Do you focus on the doughnut or its hole? What’s real is society’s responses which encompass the totality of full glasses and empty ones, doughnuts and holes, dangers and opportunities.  These are not fake.

Greet the Heat and Embrace It

In 1988, Achel Bakeri, now one of the wealthiest people in India, founded Symphony, the world’s largest manufacturer of cooling systems. At the start, Symphony’s customers were all domestic, but in the last 10 years, climate change has showered them with export opportunities. A record heat wave that hit Russia in 2010 opened the floodgate for Symphony. Their core customers stretch from the Middle East to North Africa. Heat waves in Europe have broadened their coverage to Germany and UK. Symphony’s biggest project (the biggest air cooler project anywhere, so far) is in Mecca. 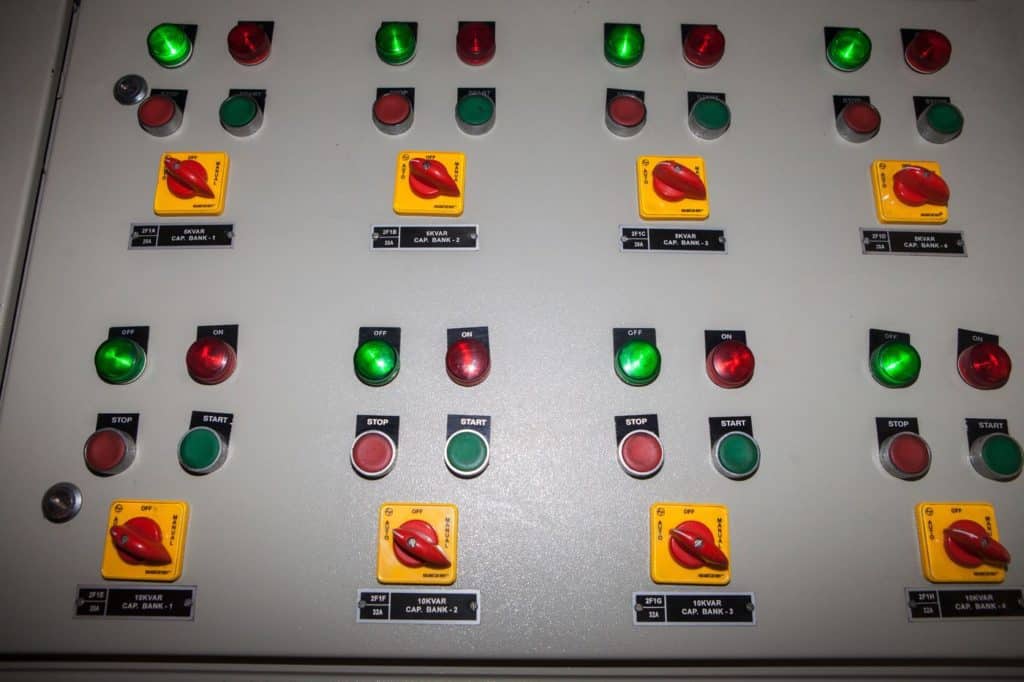 The company is featured in an article published on The Verge (theverge.com) by Josh Dzieza. It is entitled The Race Against Heat and subtitled “How do you cool 7.5 Billion people on a warming planet?” The author quotes Symphony’s sales VP, Rajesh Mishra, who sees climate change as a threat as well as a business opportunity.  “It looks bright!” he said, laughing, when I asked him about the future of the cooling industry. “It is bright because of the changing climate, unfortunately. This is an irreversible process, and now with the great Mr. Donald Trump pulling out of the treaty, things will become even worse,” he said, smiling grimly.

Sensibilities such as Mishra’s are real, not fake. There is an old saying: “When life gives you lemons, make lemonade!” 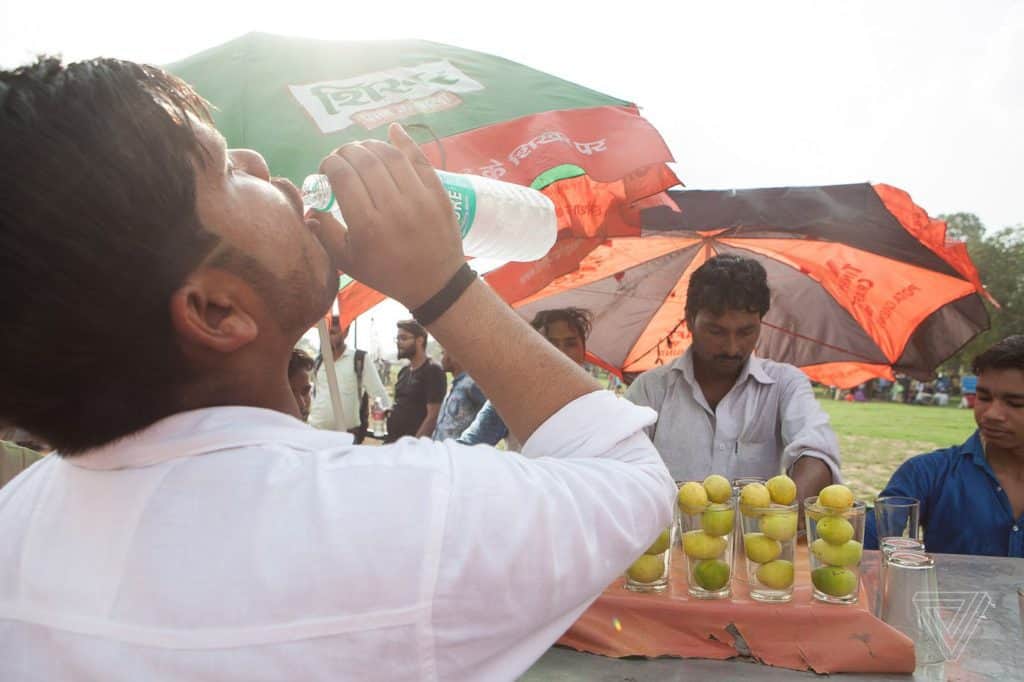 Regardless of the cause, the Arctic is warming. It is real, not fake, news. Greenland’s onshore glaciers have been retreating to reveal significantly large mineral deposits. These include iron, zinc, uranium and gold. Not only are diamonds there too, but the lodes of rare earth elements may rival those in China.  As the Atlantic Ocean has been getting warmer, fish populations are seeking a colder environment. Mackerel, herring, cod, halibut, haddock and blue fin tuna have been migrating into Greenland’s waters. This windfall is merely the flip side of the other story. It is the corollary of rising sea levels that could extinguish any island nations left after the cascading catastrophic weather events get their first licks.

The New England cod business is collapsing because the cod swam away to a colder place. They will be caught and sold by someone else. That’s business. Speaking of climate change windfalls, there is a host of examples in McKenzie Funk’s book Windfall: The Booming Business of Global Warming (Penguin Press, 2014). 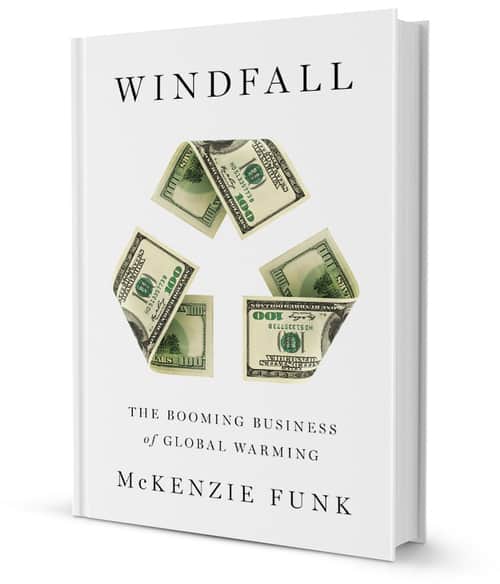 “Global warming’s physical impacts can be separated into three broad categories: melt, drought, and deluge. Funk travels to two dozen countries to profile entrepreneurial people who see a potential windfall in each of these forces.”

“The melt is a boon for newly arable, mineral rich regions of the Arctic, such as Greenland-and for the man-made snow trade. Drought creates opportunities for private firefighters working for insurance companies as well as for fund managers backing south Sudanese warlords who control local farmland. The deluge (rising seas, surging rivers, and super-storms) has been our most distant concern.”

“However, for Dutch architects designing floating cities and American scientists patenting hurricane defenses, the race is on. By letting climate change continue unchecked, we are choosing to adapt to a warming world. Containing the resulting surge will benefit some, but much of the planet will suffer. McKenzie Funk has investigated both sides, and what he has found will shock us all.”

Next Entries »
Posting....
We use cookies to ensure that we give you the best experience on our website. If you continue to use this site we will assume that you are happy with it.OkPrivacy policy