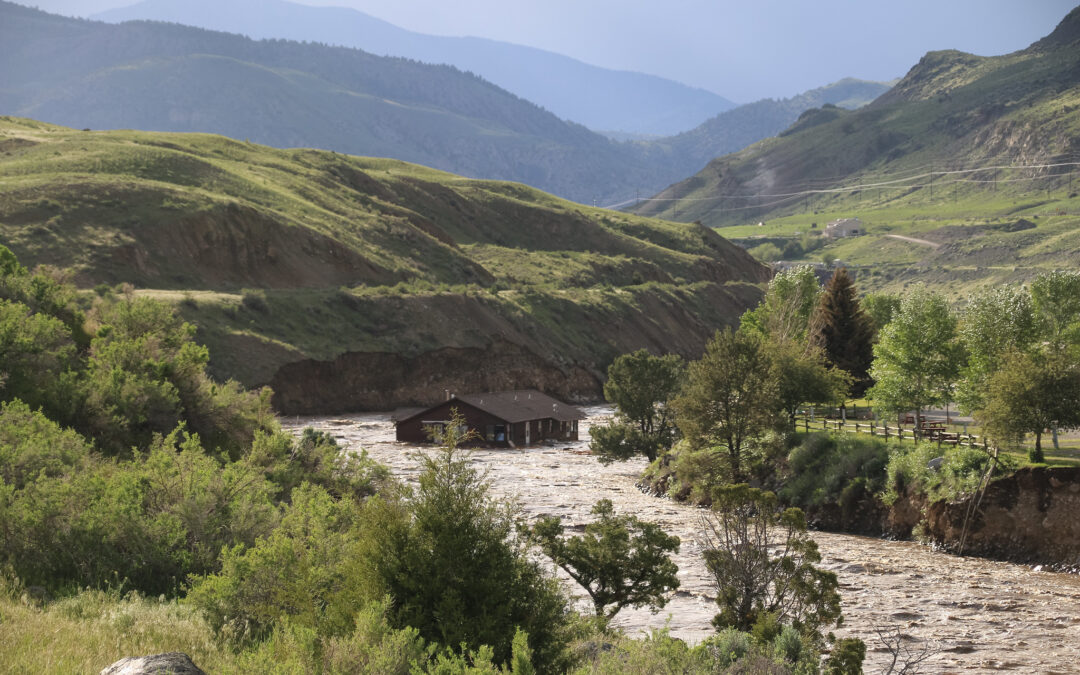 Over the course of three days this week, unprecedented rains and early snowmelt combined to close Yellowstone National Park and change its landscape forever. Rivers in Montana, Idaho, and Wyoming burst their banks.

The Park’s worst flood before those three days occurred in 1978. Experts called it a 1 in 100 years event. The US Geological Survey considered this month’s flooding to be a 1 in 500 years event.

Some forecasts see more precipitation in Yellowstone this weekend. Park administrators say they are watching the weather closely but park plans to rebuild ruined infrastructure are already underway. This time, however, they will take into account climate change.

The Greater Yellowstone Area includes parts of six major rivers: the Missouri, Upper Yellowstone, Big Horn, Upper Green, Snake Headwaters, and Upper Snake. It is one of the few remaining large and nearly intact temperate ecosystems on Earth. As the 2021 Greater Yellowstone Climate Assessment (GYCA) noted, climate change impacts on the area often push the bounds of historical trends. What happens in this area also impacts agricultural areas in the Northern High Plains.

The 2021 GYCA predicted significant changes in precipitation timing and type. More spring rain and less winter snow are foreseen. Precipitation for June 2022 is already over 400% of normal in parts of the Yellowstone area.

The timing of peak streamflows have already changed. Water amounts have not changed significantly in most of the area but there have been increases in the Yellowstone, Gallatin, and Madison rivers. All are tributaries of the Missouri River.

The GYCA showed peak flows have shifted 1 to 15 days earlier, lengthening the hot season when water is limited. In some areas, spring flows have increased by 30 to 80 percent. For other areas, minimum flows have declined by 10 to 40 percent in the summer and winter.

In the Greater Yellowstone Area, potential evapotranspiration is less than precipitation on an annual basis. At lower elevations in summer, the reverse is true. This brings an increasing seasonal water deficit.

Snowpack Issues Are at the Heart of Water Flow Issues

Warming winters are bringing earlier snowmelt and a loss of snowpack across the West, including in Yellowstone. Warmer winters bring a longer growing season because of longer summers but reduce water availability. They also increase fire risks. Both snowpack and soil moisture impact stream flow. The amount of annual streamflow can vary by up to 300 percent between years because of all these factors.

With Headwaters in Yellowstone, the Missouri River Feeds Plains Agriculture

Yellowstone area climate change impacts the Missouri River headwaters and its tributaries. Some studies indicate that rainfall and water access are already changing in the Northern Great Plains and Central Midwest due to agricultural intensification. Models in the Fourth National Climate Assessment saw annual decreases of 30 days or more in the number of days with temperatures under 28 degrees by 2050. This would have serious implications for the region’s snowpack, streamflow, and water use.

Parts of the Northern Great Plains are among the most arid in the United States. Because they are far from the coasts, the Northern Great Plains’ climate is not modulated by the oceans. Extreme drought or extreme flooding tends to happen every ten years or so. With less than ten percent of regional precipitation reaching the Missouri River, large changes in flooding can be brought about by small changes in precipitation. A good example of the region’s unpredictable weather is the severe flooding of 2011. It was followed by a drought in 2012.

Changes in peak streamflow timing since 1970 look similar to the peak timing during the 1930s Dust Bowl drought but the difference is that a year-round decline in precipitation caused the Dust Bowl. As the Greater Yellowstone Climate Assessment points out, the recent change in peak streamflow times is caused by spring temperatures rising sooner. Earlier spring warmth causes earlier snow melting.