El Nino weakening. Where are the present global weather extremes? 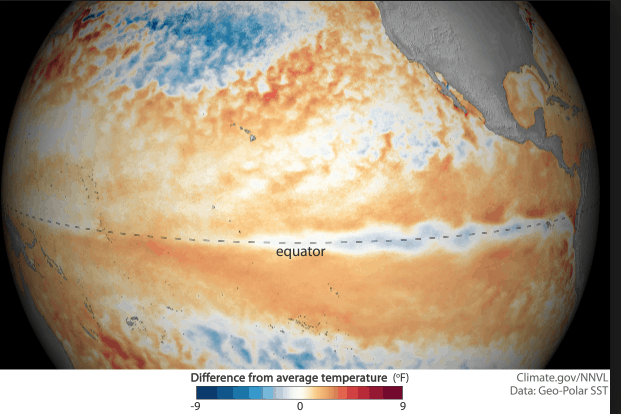 Many commodities have been in the tank due to a combination of renewed Trade War concerns with China and a growing glut for such commodities as corn, wheat, soybeans, coffee and others. Global weather patterns have been mostly beneficial to agricultural interests over the last year, but don’t tell this to Midwest farmers who are having one of the most difficult times in planting corn since 1993 and 2008. The Midwest and parts of the Deep South will continue having issues with planting and germination as we head deeper into May.

El Nino is weakening, which is not unusual this time of the year. However, this does not mean that some global weather issues to crops will not pop up along the way through springtime and into summer. West African cocoa and Indian Monsoon weather will be important to the cocoa and sugar market in the months ahead.

The above table and chart show the newly constructed MEIv2 index, which replaces the old MEI calculation method. You can see how the values have been weakening, especially plunging in recent months. This implies changes in ocean temperatures in the Pacific, as well as other criteria such as the SOI index and global angular momentum. This indicator is a key in predicting El Nino or La Nina.

The above chart shows how the upper ocean heat content along the Pacific Equatorial region is sloping downwards (cooling a bit from the warm levels). This implies a weakening of El Nino. The huge record snows out west this past winter, severe weather and tornadoes and flooding to Midwest crops were signs of El Nino conditions and lingering wet weather effects from El Nino should still continue for at least another few weeks.

The 1993 severe Midwest flooding occurred with a weakening El Nino, as did summer dryness to west Africa cocoa. Hence, it does not take a full fledged El Nino to create some global weather havoc. I will be watching

email me for more information at bestweatherroemer@gmail.com