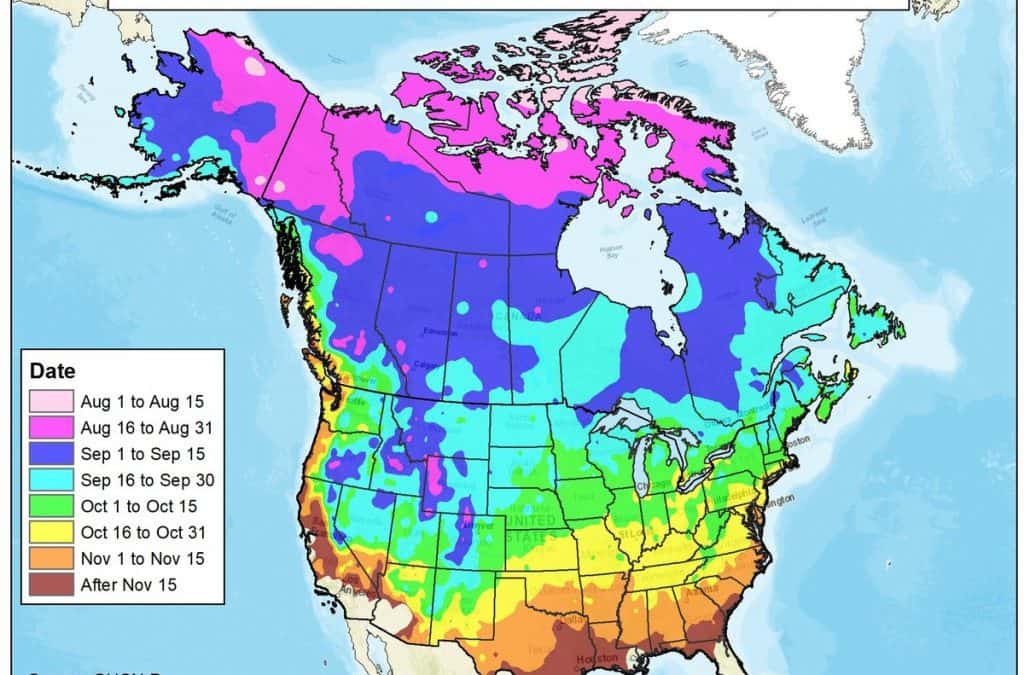 After the late planted spring for many Midwest corn and soybean farmers, from the record wet May and June weather, conditions have improved over the last few weeks helping to pressure soybeans and especially corn prices. This is consistent with our original weather forecast for improved rain prospects for Midwest crops since late July and my overall bearish attitude in corn prices. While yield prospects are still in question across parts of Illinois to Indiana and Ohio due to some summer dryness, a return of warmer weather heading deeper into September should be a blessing for Midwest farmers.

The chart above shows the “normal” first frost date for Midwest corn and soybean crops. We invite you to go to this interesting link and click on your region too see some of the latest forecasts for the timing of the first frost this fall.

Two years that were some of the most devastating for Midwest corn and soybean farmers, were 1993 and 2009 when a combination of a wet spring and early season frost hurt crops. However, this fall, a weakening El Nino event is changing the global wind patterns. The good news is that a later than normal frost seems more likely for at least 70% of the Midwest.

We can see models (below) showing a large ridge over the southern U.S. over the next week or two. This heat will speed up crop maturity for corn and beans with little site of any cold weather for at least 2-3 weeks. Look for the first Midwest frost this year to be at least 1-2 weeks later than normal unless the NAO or AO index goes negative.

The news media basically does not know what is going on in natural gas. First they thought natural gas prices were rallying a week ago over worries of hurricane Dorian going into the Gulf. Wrong! I have clearly stated this was a long shot of a hurricane in the Gulf anytime in the near future. Then they blame the recent rally on short term heat in the Deep South from Texas to the Carolinas. While the heat is part of it, below I list many other reasons for the natural gas price rally.

Here are my recent bullish reasons in natural gas and my take on the weather:

Historically, a warm late September and October, if we have it, reduces demand for U.S. natural gas and could pressure prices, later this fall. However, for the moment, in the short term the heat in the south combined with factors listed above have become bullish the market. Natural gas has nothing to do with hurricanes right now, other than the lack of demand destruction, if a storm would hit the south and east and cool things off–Jim Roemer