What Factors Will Influence Midwest Corn Belt Weather–What Is the PDO? 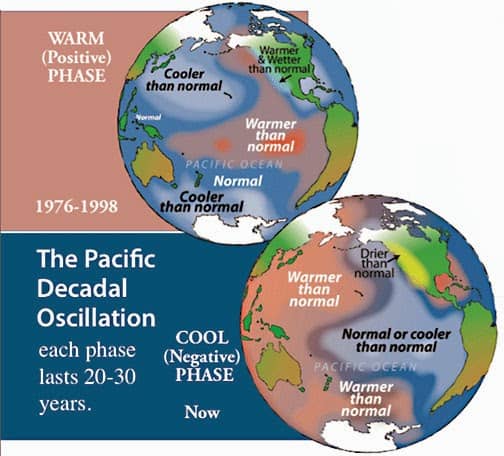 We have seen a stellar rally in the stock market and a weaker dollar which has temporarily supported corn and soybean prices and particularly the crude oil market.

However, we entering the most important time of the year for the US corn crop. As a farmer, you are trying to figure out how low corn prices may go. Should you be hegding at these cheap prices, or is there a chance for a Midwest hot, dry spell?

As a trader you are looking for opportunities to ride the coat tails of some sort of potential bull market in agricultural commodities–but will there be any?

There are at least 3 weather criteria that will affect Midwestern grain weather this summer. In my opinion, they are 1) Whether La Nina forms; 2) The Pacific Decadal Oscillation Index (PDO); 3) The NAO/AO relationship and what happens with the weakened, summer, Polar Vortex.

First of all, there are signs of a developing La Nina as ocean temperatures in the Pacific Ocean begin to cool rapidly, The cooling ocean can sometimes be affected by low solar activity. Most, not all, Midwest summer hot, dry spells are associated with either a rapidly diminishing El Nino event (1983 is one key example), or the onset of La Nina (1954, 1974 and. most recently the big 2011-2012 droughts).

There are of course many other La Nina years that we did not just mention. Yes, many of them also had below normal Midwest corn and soybean yields; others did not. Why was this? It all has to do with what we call the PDO.

The Pacific Decadal Oscillation (PDO) is often described as a long-lived El Niño-like pattern of Pacific climate variability (Zhang et al. 1997). As seen with the better-known El Niño/Southern Oscillation (ENSO), extremes in the PDO pattern are marked by widespread variations in the Pacific Basin and the North American climate.

The (PDO) is a pattern of change in the Pacific Ocean’s climate. The PDO is detected as warm or cool surface waters in the Pacific Ocean, north of 20° N. During a “warm”, or “positive”, phase, the west Pacific becomes cool and part of the eastern ocean warms; during a “cool” or “negative” phase, the opposite pattern occurs. It shifts phases on at least inter-decadal time scale, usually about 20 to 30 years. However, there can be some short term variations in this index that can drive Midwest corn belt weather.

The image on the bottom is when the PDO is in a cool (negative phase). When this happens and we have a developing La Nina at the same time, Midwest corn and soybean yields tend to fall. The oceans are warming in the western Pacific, so we are sort of trending towards a negative PDO, that would normally hurt summer Midwest corn and beans in some areas.

However, right along the west Coast of California, it is likely still too warm, so I do not see yet a classic NEGATIVE PDO EVENT.

If we see the eastern Pacific cool off in the next month or so, given the fact that the western Pacific (east of Asia) is warming, this might signal a negative PDO. Combine this with a potential developing La Nina and this would increase the odds of lower than normal summer yields for corn and soybeans. However, for right now, the image above shows the forecast for warm ocean temperatures (neutral to +PDO off of California. This usually bodes well for Midwest corn and bean crops in July.

If you would like to receive a few FREE reports of my bi-weekly Weather Wealth newsletter and learn how to trade commodities on the weather and receive my longer range outlooks for multiple commodities, you can always sign up here FREE TRIAL period.