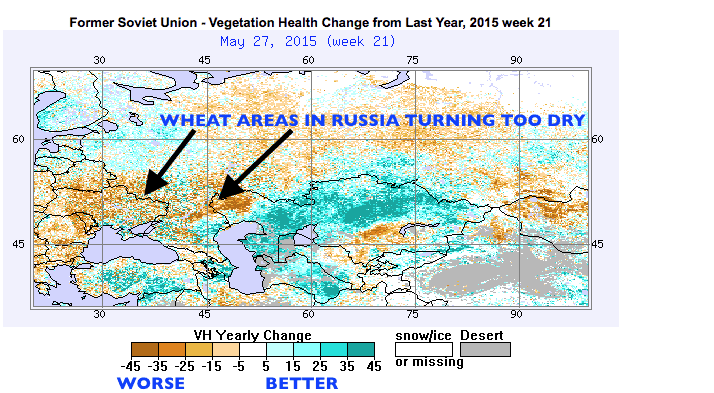 About a month ago, I wrote that El Niño bears little correlation between wheat yields and weather (spring and/or summer) in Europe and the Ukraine. However, growing dryness in the easternmost Russian winter wheat areas (and potentially in the spring wheat areas) can be attributed to certain El Niño events. This is especially so when the Indian Dipole is positive.

The Indian dipole refers to a warmer than normal ocean east of Africa and cooler than normal in Indonesia. This index is expected to be quite positive in coming months. More often than not, this impacts global weather. In part, it has been responsible for the ongoing drought in Australia. Thankfully, some much needed rains ‘down under’ are in the forecast for next week.

The image below illustrates the above normal rainfall in some areas of southern and eastern Australia in the short term. However, the positive Indian Dipole and weak El Niño signal still imply returning dryness later. Australia’s wheat crop may suffer.

Climatech, my in-house program, shows the correlations with June rainfall for Russian spring wheat areas. Basically, when ocean temperatures are warmer than normal at Niño 3.4 regions and we have even a weak El Niño signal, the correlation is negative for rainfall (dry signal). The positive Indian Dipole (DMI), shown here, also has a slight negative correlation with rainfall. Hence, the significant precipitation in the U.S. wheat areas is compromising quality. Combining this with some dryness expanding in eastern Russian wheat areas has been for wheat prices. The world is still awash in wheat, however, so savvy traders will be monitoring any change in my forecast in coming weeks.

This week’s USDA weekly crop progress report could show that the wheat crop in Kansas and Nebraska has actually improved from recent rains, while in Illinois, Indiana and Missouri, the crop is coming down in quality.

The bottom line is, that we probably have to see world weather problems grow in many countries to see another leg up in wheat prices, as the recent 15% rally in prices may be built into the market. Europe and western Russian wheat crops are fine. Hence, a volatile confusing trade in wheat may be the rule heading into early summer. If a wet late spring hurts quality of crops in Kansas to Texas (heart of U.S. wheat country), then this will be important, later.

The correlation of a weak El Niño signal in years with a positive DMI suggest drier risks for Russian wheat areas. However, the world is still awash in wheat and further problems may be needed to warrant any more of a bull market.