European heatwave, wheat, and the recent bull move in coffee 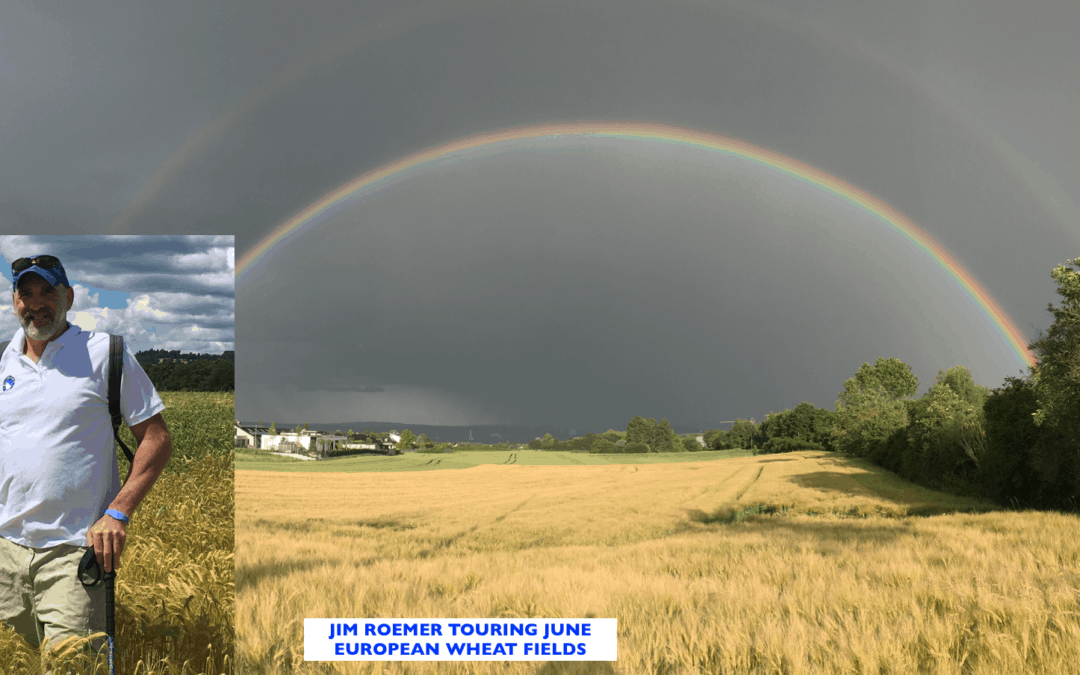 “Where is the next pot of gold in commodities, as I continue to tour European wheat areas?” Roemer

The big commodity movers of late have been in the non weather markets in both gold and crude oil. These two markets have been breaking technical resistance due to a combination of a weaker US dollar, additional sanctions and threats against Iran and technical chart considerations. Prior to this past week, all of the fireworks were in the grain market with a 30% move up in corn on midwest flooding, which I began predicting close to two months ago. Soybean prices began taking note as well, as several million acres could be lost. However, the world is awash in soybeans and it will take a hot, dry summer to really jump start this market.

So as I tour European wheat fields (picture shows above), where is the next potential “pot of gold” under the proverbial commodity rainbow? Is it the wheat market, which has gotten a boost from the rise in corn prices, drought in Australia, a heatwave in Europe and a wet US spring, which has reduced the wheat crop from Missouri to Illinois, Indiana and Ohio? Or is it in coffee futures, which have rallied sharply the last week on a frost worry for parts of Brazil and the weaker dollar? If you are interested in know my feeling, please email me at bestweatherroemer@gmail.com

For a little insight of what is driving the wheat and coffee market, please continue reading, below.

El Nino is weakening, hence, it may be more difficult than usual to forecast crop production and weather for key important sugar and cocoa areas in Southeast Asia and West Africa.

First of all in wheat, it is often difficult to develop a long-term view as far as price predictions, in part because there are so many countries to watch with respect to weather and crop production. The demand side of the equation is at least as important to this market. However, a weaker dollar, a poor US wheat crop and drought in Australia normally would give this market a huge boost. However, global stocks remain huge and the Russian wheat crop appears as will escape any serious loss from recent dry weather. Hence, it may take further dryness in Russia and harvest delays to the US wheat crop to get this market to rally another 10-20%. Nevertheless, the US crop is behind normal in development and the harvest due to the wet, cool spring. This makes for more of a tight short term situation in CBOT wheat, especially, as there is a lack of wheat that will hit the pipeline. However, with more normal weather for US grain areas coming up and the talk of hot weather to European wheat likely over-done, I cannot say that global weather is bullish wheat at these more lofty prices currently.

The European heat wave above would have been more of a concern to the wheat crop, if it were not for the blessing of a wet spring. Most of the crop is past the point of being hurt adversely as harvest is around the corner.

There is some concern about the France and German wheat crop being hit by 90-100 degree heat this week, but as you can see (above), the crop has been in great condition from earlier spring rainfall. Hot late season weather prior to harvest can shrivel up wheat kernels, but any major loss in production is unlikely. I have been traveling through Europe checking out the wheat crop and there does not appear to be any major problems. Of more concern for the wheat market, would be if US crop conditions continue to fall (as shown here), but with El Nino weakening, it appears drying would improve for crops.

After my bearish attitude in coffee prices most of last year and this year, when prices get below $1.00 it is rare for them to stay below that level for very long. However, with this being the short, off-cycle crop year in Brazil, the Brazil Real showing signs of bottoming and a heavy short position in the market, prices have rallied back some 10-15% since the late spring lows. I told clients last week, that I thought there may be a “psychological” cold weather scare for Brazil for early July. The map below shows the first cold wave of the season (Brazil winter)

The psychology of the first cold wave for Brazil coffee areas in years has been part of the reason for the recent rally. However, will the cold really be legitimate? If not, coffee prices could fall back next month, depending on the Brazil Real.