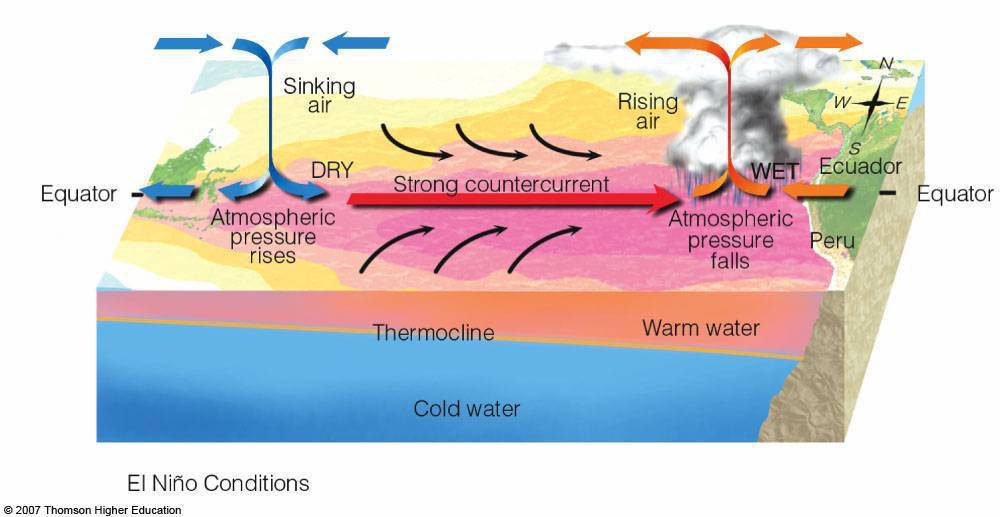 The picture of El Nino type conditions (above) illustrates the falling atmospheric pressures close to Peru and rising surface pressures around Australia. For there to be a full fledged El Nino, these conditions must exist consistently for several months, along with warmer than normal ocean temperatures in the Equatorial Pacific. This will probably not happen.

Grain and some soft commodity prices (coffee, cocoa, cotton) continue to be in a downward spiral even with potential positive trade war discussion talks with China and a switch to a short term El Nino signal Why the bear market? The stronger dollar, Swine Flu in China (which could affect their grain demand) and improved global weather from Brazil to west Africa are the culprits.

While many meteorologists and commodity traders believe that El Nino and the SOI index are the most significant weather factors for predicting crop and weather trends for tropical soft commodities, my Climatech program below illustrates how other factors such as the AAO– Antarctic Oscillation Index (similar to the AO index in the northern hemisphere in the Arctic) is even more highly correlated than El Nino this time of the year.

CLIMATECH MARCH RAINFALL FORECAST (ABOVE) normally would suggest a very dry weather pattern for Northern Brazil sugar, coffee and soybeans for March. The AAO index, SOI El Nino signal and other teleconnections all show negative numbers– a dry correlation signal for sugar areas. However, the MJO towards the bottom of this page, has trumped many weather signals this year.

Back to the sugar market for the moment. The charts below depict where crop stress has been in Brazil most recently and that sugar production has been coming down a bit. This has helped to lift the sugar market in recent days. It is possible that lower sugar beet plantings in Europe this spring, combined with increased demand could keep the sugar market firm. This could be especially true “if” crude oil prices continue higher. However, from strictly a weather stand point. I do not believe that El Nino will be important enough to cause widespread global weather problems in multiple countries. Otherwise, a much more pronounced bull market could ensue in coming months would occur for sugar prices. Weather problems would have to occur from other climatic variables, “most likely” not from El Nino. Excellent rains will be coming to Brazil sugar areas easing the drought that has recently developed. This is due to the MJO.

The charts above show Brazil sugar cane regions and the recent crop stress due to the occasional weak El Nino signal. Brazil is one of the biggest producers of sugar in the world and their crop is likely coming down due but rains are in the forecast into March.

The MJO is an area of disturbed weather that often originates in the lower latitudes near the equation and rotates the globe every couple months or so. Due to what I believe are warming oceans from Climate Change, the MJO has been stronger and persisted longer than it normally would have this winter. This has been at least partly responsible for the collapse in natural gas prices, as the weather has not been consistently cold in the U.S. this winter. In addition, the MJO going into phase 8 then 1,2 and 3 (Atlantic) is offsetting “all” dry teleconnection signals in Brazil and is bringing important rains to Brazil soybeans and coffee helping to pressure those markets.