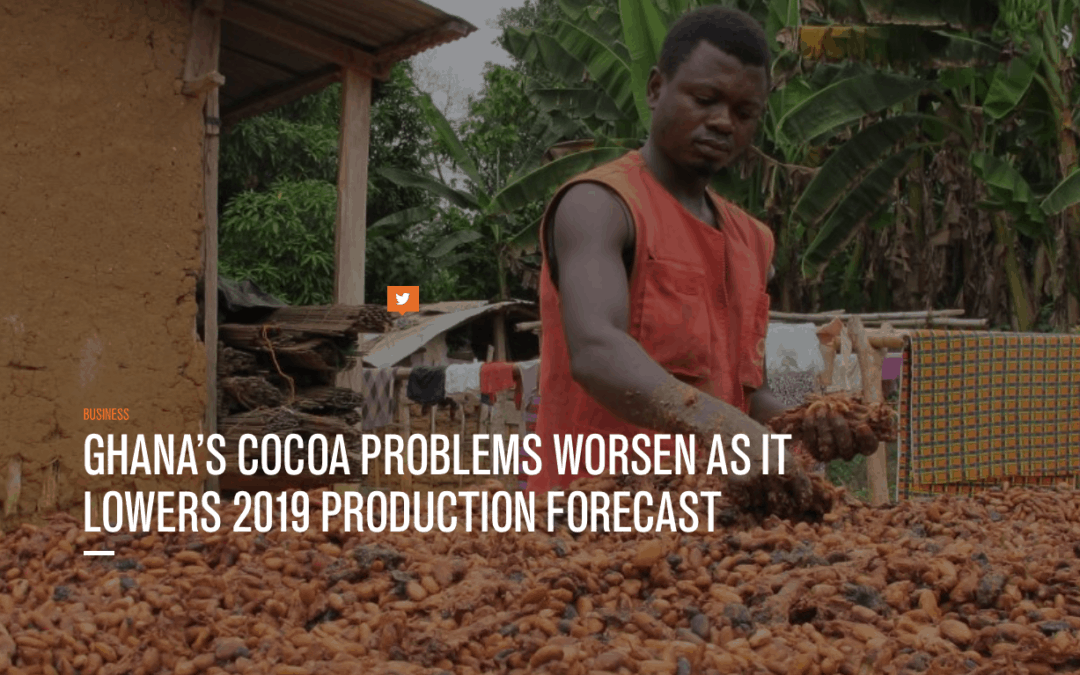 The weather over the next few months will play an important role in the development of the Ghana and Ivory Coast cocoa “main crop”, which accounts for more than 60% of world chocolate production. Concerns about disease issues in Ghana and the tail end of an El Nino potentially resulting in a dry west African summer, has, as of this writing created a short covering rally in cocoa. If you are interested in my longer term views about this market, please email me at bestweatherroemer@gmail.com

In the meantime, here is a recent article about Ghana and cocoa production:” I believe that Climate Change and warmer weather in west Africa has been one key reason for the increased risk of Swollen Shoot Virus disease, in which many trees have been and will be continue to cut down to help eradicate the disease”: Jim Roemer

Cocoa has been the mainstay of Ghana’s economy for decades, generating about $2 billion in foreign exchange annually and a major contributor to the Gross Domestic Product (GDP). Now, the ‘national treasure’ might be causing a lot of worry for the West African country as a once-booming cocoa sector is facing a severe plant disease.

In September 2018, Ghana projected cocoa production at 900,000 tonnes but after a few months, the estimate was reviewed and arrived at 850,000, a six percent drop. This reduction was due to both dry weather conditions and most crucially, a disease that might have eaten deep into the country’s cocoa plantation.

The disease, the swollen shoot virus, has led to abnormally shaped pods and a lesser return in production. Although the plant disease is not uncommon across cocoa growing regions in West Africa, the current outbreak in western Ghana is particularly severe, a source told CGTN Africa.

Ghana, the second largest producer of cocoa after Ivory Coast, is looking for measures to curb this economic disaster. This is because, apart from the revenue the sector might be losing, cocoa plays a key role in the economic stability of the country.

The cocoa sector serves as employment opportunities for over one million Ghanaian. Thus, loss of jobs as a result of the problem with the sector will almost leave the country struggling and pose a threat to a rise in the country’s crime rate, which is largely driven by unemployment.

A report by World Bank shows that Ghana already had an increasingly 48 percent of its youths unemployed, and those between 15-24 years do not have jobs. While the government is still battling this epidemic, the cocoa industry sending thousands of people out of jobs would be a huge problem for the country.

Paying extra focus on the global economic relevance of cocoa, Ghana supplies 21 percent of cocoa demand around the world. Countries like South Africa, Tanzania, and some European countries depend on the African nation for its supply. Consequently, a strain in the sector will have an effect on the global level.

More so, the downturn in Ghana’s cocoa may affect the production, price, and regulation of food products made from cocoa such as chocolate, beverages, flavored drinks, etc especially if the producing countries are part of the Ghana cocoa community.

These problems will continue to compound if the government of Ghana doesn’t find solutions to curb this issue. International bodies would be needed to help contribute the expertise needed to produce positive results and hopefully, a solution would be found real quick to save the plummeting situation.