Could Two Tropical Systems Collide And Become A MegaStorm Next Week? 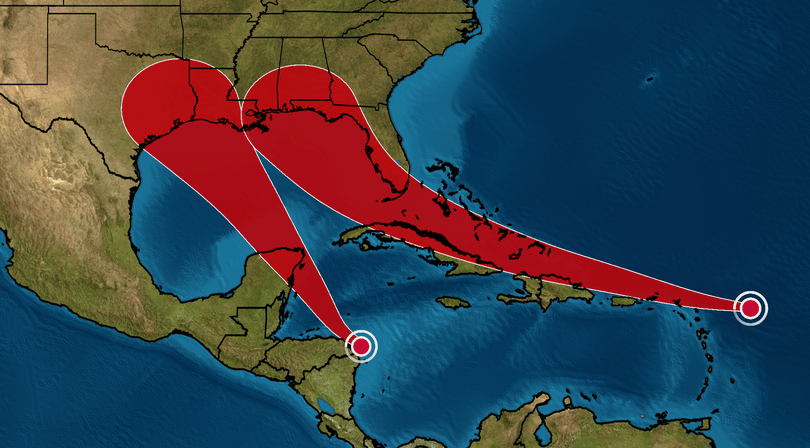 For the first time since the Great Depression, it’s possible that two tropical systems could make landfall in the mainland United States at virtually the same time. Given the warm Gulf of Mexico waters, the loop current (which I explain below), a developing weak La Nina, and something we call the MJO, next week’s storm could be stronger than most models are saying. This is one reason why crude oil futures rallied back off of Friday’s lows and natural gas prices soared.

Look for some fireworks next week in gasoline futures, natural gas, and possibly cotton as I believe Laura will turn into a major hurricane before Wednesday (In contrast with what CWG and NOAA are predicting. This is because of the LOOP CURRENT (I discuss below), low shear in the Gulf due to the MJO, and also cooling waters towards La Nina in the eastern Pacific.

The Gulf of Mexico loop current brings warm Caribbean water northward between the Yucatan Peninsula and Cuba and into the Gulf. The current loops around the Gulf, flows southeastward into the Florida Strait. There it serves as a parent to the Florida current and ultimately joins the Gulf Stream.

The Loop Current is an area of warm water that travels up from the Caribbean, past the Yucatan Peninsula, and into the Gulf of Mexico. The current is also known as the Florida current as it flows through the Florida Strait, into the Gulf Stream, and heads north up the eastern coast of the U.S.

From the south, the Gulf of Mexico is fed by a current of warm water from the Caribbean. This enters the Gulf between Mexico’s Yucatan Peninsula and Cuba. Forming the Gulf Loop Current, it curves east and south along Florida’s coast and exits through the Straits of Florida.

The loop current is one of the fastest currents in the Atlantic, traveling at speeds of approximately 0.8 m/s. It is typically about 800 m deep. The extent of the loop current’s intrusion into the Gulf varies with eddies, frequently breaking off when the current stretches far into the Gulf.

Click on the video above to hear more about what the Loop Current is.

Here is a time sequence of the present loop current in August. Notice the two or three regions of orange and red. These represent the loop current and warmest ocean temps in the Gulf. Storms this season that pass over these war areas will intensify into hurricanes. When a tropical depression or tropical storm passes “in-between” the loop current (yellow areas are not quite as warm), then the chances for explosive development is less likely.

What Is the Fujiwara Effect?

Several models show the paths of the storms colliding sometime Monday afternoon or Tuesday morning. If this occurs, the ‘Fujiwara effect’ could cause the 2 growing storms to become one massive mega-hurricane.

According to the National Weather Service, “the fujiwara effect occurs when two hurricanes spinning in the same direction pass close enough to each other, they begin an intense dance around their common center…often, the effect is additive when hurricanes come together — we usually end up with one massive storm instead of two smaller ones.”

Here you can see how 2 smaller storms, Nuru and Kulap. combined in 2017 to become the largest storm of the Pacific that year.

Right now, the odds probably favor this not happening, but it is something to watch for early next week.

So how will the present hurricane season impact the energy, cotton, and natural gas markets? Will there be a big trade in some equities based on an active season? The best way to find out is to sign up below to a 2 week free trial of our twice-weekly newsletter–Weather Wealth. This is the only commodity weather newsletter with recommended trade ideas. Look for Laura to possibly be a category 3-4 hurricane next week before hitting close to Lousiana or NE Texas.