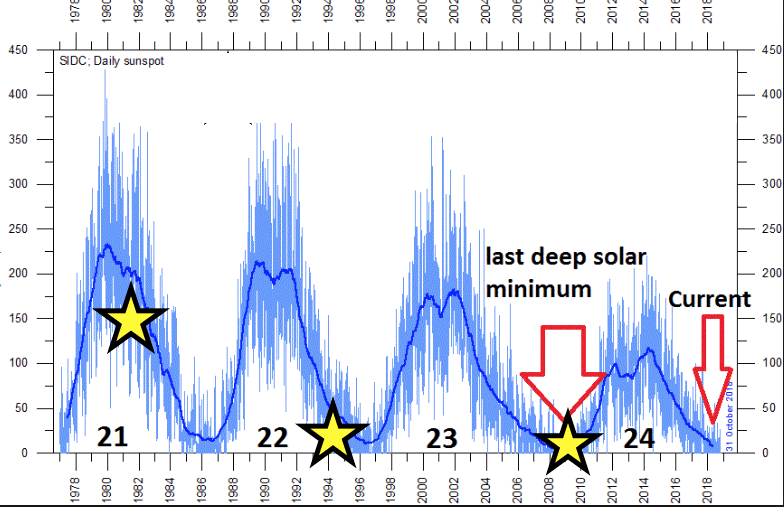 There has been much discussion about the incredibly snowy ski season out west, the end of the California drought and potential for severely cold United States winters ahead the next few years due to an extended, upcoming “solar minimum.” However, giving the possibility of global warming and climate change, the warming oceans and history of the unpredictability forecasting volcanic eruptions that can alter the climate, the topic remains highly controversial. Making blanket one-sided statements is irresponsible and sensationalistic, in my opinion.

In this report, I discuss the implications that a low solar cycle, combined with an El Nino has probably been a key factor in the record western snows this winter and end of the California drought. However, in my view, the warming oceans, brought on by global warming has likely also been a factor.

Record Western Ski Season will continue through April. Why?

Squaw Valley, California had their greatest February snowfall ever with 315″ and places like Snowbird, Utah (“The Greatest Snow On Earth”) is on pace to have more than 630″ of total snow this winter. This would be the 3rd highest ever snowfall recorded at Snowbird. Previous records were the winter of 1951-52 (641″) and 1983-84 (688″) and the weather the weather pattern looks, I expect another 30-50″ of snow across many areas from Tahoe to Snowbird, Utah, Colorado and even ski resorts in Arizona over the next 10-15 days.

Low Sunspot Activity or El Nino? What has caused the incredible western snows and end of the droughts?

But what is causing this? After all, the last El Nino phenomena (2014-16), was a dud as far as western moisture goes (California’s multi-year drought only worsened), when historically big snows and rains hit the west during “some” El Nino events. While commodities such as sugar, coffee and rice were affected by the most recent strong (2014-16) El Nino in Southeast Asia, much of the western United States baked in droughts. This winter, the combination of low solar activity, coupled with a weak El Nino could, together, be the reasons for the incessant western moisture. But again, there are other factors at play in predicting global climate.

Could solar cycles be to blame for the most recent western droughts, brush and forest fires which wiped out millions of acres of land including some California wineries? I doubt it. Weather is cyclical. The previous western droughts could be a combination of global warming and the fact that we needed to see both an El Nino and low solar activity at the same time to break the drought! ( See my remarks at the bottom of this report) .

Now that we are entering an extended solar minimum (few sunspots/storms on the sun), is the near record western winter snows due to the inactive sun?

Many meteorologists feel that the incessant western snows and easing of the California drought ( will be a huge blessing for thousands of farmers), has been due to El Nino. However, in nearly half of the listed snowiest winters at Snowbird, Utah, described above, there was either a La Nina or La Nada (neutral year).

Volcanic activity, El Nino, as well as the warming of the oceans due to Climate Change, are in my opinion, at least as important, if not more so than solar cycles. However, when correlated together, El Nino with low solar activity seems to be a better “weather pattern” predicator.

So what about El Nino? There is a correlation with low solar activity increasing what we call Cosmic Rays that can contribute to more cloudiness along the equator and affect the Trade Winds and contribute to El Nino. However, there are also many El Nino’s, which occurred, not because of a solar minimum but due to other climatic variable. Nevertheless, the present weak El Nino probably never would have happened if it was not for the low solar activity.

Cosmic rays are energetic particles that originate in space and our sun and collide with particles as they zip through our atmosphere. “Solar Cosmic Rays” (SCR’s – cosmic rays from the sun) originate in the sun’s  chromosphere. Most solar cosmic ray events correlate relatively well with solar flares. Cosmic rays can affect the earth by causing changes in weather and possibly long term climate. Moving at close to the speed of light, these nuclear fragments smash into air molecules hard enough to knock electrons loose. This well-documented process creates negatively and positively charged ions. During low sunspot activity (like we have now).

The most well-documented connection between the sun and Earth effects, other than the total sunlight, is in the cosmic rays received. It is believed that this is caused by the solar magnetic field being weaker at solar minimums, which lets more cosmic rays penetrate into Earth’s atmosphere. Hence cosmic rays are at a maximum when solar activity is at a minimum.

The chart above shows solar cycles (green lines) from 1950 to 2010. The red arrows represent El Nino events and the blue arrows La Nina events. At first glance there appears to be “some correlation” with El Nino events typically occurring at lower solar cycles and high Cosmic Rays. However, this theory remains controversial, just as the “Global Warming-Climate Change-Solar Cycle topic” has remained immensely controversial.

According to two solar physicists, Robert Leamon from NASA Goddard Space Flight Center, and Scott McIntosh from the High Altitude Observatory at Boulder, CO, they have made an interesting observation that links changes in solar activity with changes in the El Niño Southern Oscillation (ENSO), (see the chart above) but state that it is “clear that solar activity” is not the only factoring affecting El Nino.

In a separate study several years ago, according to Eddie Haam, School of Engineering and Applied Sciences, Harvard University, ” Both the 11-yr solar cycle and the El Niño–Southern Oscillation (ENSO) phenomena are quasi periodic. There have been claims that the two are correlated (Solar Cycles and El Nino/La Nina). However, both phenomena are also highly autocorrelated. Caution should be exercised when testing for the statistical significance of the correlation of two autocorrelated time series. There is so far no solar ENSO (El Nino/La Nina) connection found that is statistically significant.”

My point is that there are many factors affecting global climate. Putting too much faith just into solar cycles and El Nino alone in forecasting severe winters ahead and extreme weather events around the world have to be taken with a grain of salt. The fact El Nino conditions have been prevalent for much of the United States this winter (not necessarily in other parts of the globe, yet) is probably is due to some interaction with the Solar-Cosmic Rays cycle.

I believe the warming oceans, brought on by Co2 emissions, volcanic eruptions, etc. has just as much of an effect on global weather patterns as solar cycles and El Nino/La Nina does. It is a very complicated, interwoven subject!!