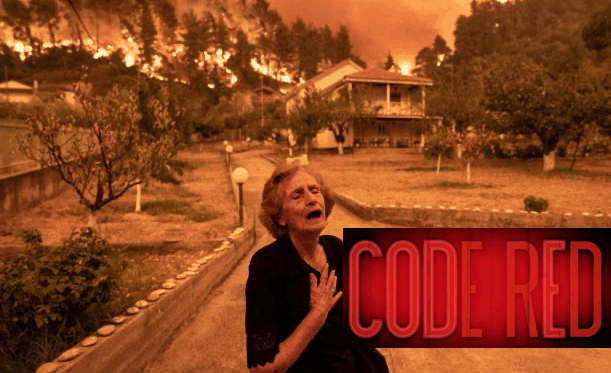 The information in this report was sourced from un.org, govinfo.gov, nasa.gov, noaa.gov, bbc.com, wsj.com – and other sources that are cited in the narrative.

UN Secretary-General António Guterres’ statement on the Intergovernmental Panel on Climate Change (IPCC) is a “Code Red” with respect to Climate Change and Global Warming. The landmark study warns of increasingly extreme heatwaves, droughts, and flooding, and a key temperature limit being broken in just over a decade.

The alarm bells are deafening, and the evidence is irrefutable:  greenhouse‑gas emissions from fossil-fuel burning and deforestation are choking our planet and putting billions of people at immediate risk.  Global heating is affecting every region on Earth, with many of the changes becoming irreversible.

The dire warnings that our planet continues to express: droughts, floods, stronger hurricanes, etc. continually meet political opposition among skeptics who say that what is happening is all “cyclical in nature” and more due to solar cycles and other climatic variables. This cannot be farther from the truth. Luckily, there are organizations like the Climate Adaptation Center, located in Sarasota, Florida, that are taking measures to help educate people about climate change and to mitigate risks caused by sea-level rise, red tide, and more.

The solutions are clear.  Inclusive and green economies, prosperity, cleaner air, and better health care are possible for all if we respond to this crisis with solidarity and courage.  All nations, especially the G20 and other major emitters, need to join the net-zero emissions coalition and reinforce their commitments with credible, concrete and enhanced nationally determined contributions and policies before COP26 in Glasgow.

The climate crisis poses an enormous financial risk to investment managers, asset owners, and businesses.  These risks should be measured, disclosed, and mitigated

For more than 40 years, satellites have observed the Sun’s energy output, which has gone up or down by less than 0.1 percent during that period. Since 1750, the warming driven by greenhouse gases coming from the human burning of fossil fuels is over 50 times greater than the slight extra warming coming from the Sun itself over that same time interval.

The graph below compares global surface temperature changes (red line) and the Sun’s energy that Earth receives (yellow line) in watts (units of energy) per square meter since 1880. The lighter/thinner lines show the yearly levels while the heavier/thicker lines show the 11-year average trends. Eleven-year averages are used to reduce the year-to-year natural noise in the data, making the underlying trends more obvious.

The amount of solar energy that Earth receives has followed the Sun’s natural 11-year cycle of small ups and downs with no net increase since the 1950s. Over the same period, global temperature has risen markedly. It is therefore extremely unlikely that the Sun has caused the observed global temperature warming trend over the past half-century

The Sun is currently experiencing a low level of sunspot activity. Some scientists speculate that this may be the beginning of a periodic solar event called a “grand minimum,” while others say there is insufficient evidence to support that position. During a grand minimum, solar magnetism diminishes, sunspots appear infrequently and less ultraviolet radiation reaches Earth. Grand minimums can last several decades to centuries. The largest recent event happened during the “Little Ice Age” (13th to mid-19th century): the “Maunder Minimum,” an extended period of time between 1645 and 1715, when there were few sunspots.

However, both NOAA and thousands of scientists around the world feel it is highly unlikely that another major solar minimum will create widespread global cooling as it did hundreds of years ago. Why? Simply put, man-made global warming will easily outweigh any long-term cooling effects from an inactive sun.

Climate Change solutions proposed by scientists include using clean technology, carbon capture, and storage, or planting trees. The Dutch are building floating islands in the Maldives. In California, winegrowers have to succumb to using treated wastewater to irrigate their grapes!

The challenge to mitigate further climate risk does open up the development and use of many new technologies and industries. This could help power the global economy for the rest of the 21st century.

Do your kids want to go into finance and make a fortune on Wall Street? I propose that going into engineering, environmental science, and meteorology and helping to solve the globe’s climate problem might be much more rewarding and potentially more prosperous.

He says, “The deluge—the rising seas, surging rivers, and superstorms that will threaten island nations and coastal cities—has been our most distant concern, but after Hurricane Sandy and failure after failure to cut global carbon emissions, it is not so distant. For Dutch architects designing floating cities and American scientists patenting hurricane defenses, the race is on. For low-lying countries like Bangladesh, the coming deluge presents an existential threat.“

McKenzie Funk looks into how some entrepreneurs and even some nations stand to benefit from a changing climate. For example, buying water rights and farmland around the world, to private wildfire protection services for affluent homeowners, to the nation of Greenland, which will be able to exploit new mineral deposits as its ice melts.

In WEATHER WEALTH, my newsletter whose subscribers are farmers, commodity traders, investors of all kinds, I look for investment opportunities related to global weather extremes.

Unfortunately, at the expense of millions of acres of farmland being destroyed, wineries and historical landmarks being decimated, and flooding dislodging coastal residents, Climate Change does offer some investment opportunities. Global droughts, floods, etc. have offered investment opportunities in everything from electric cars to oat, sugar, and coffee futures.

It will be a race to protect our planet before it is too late. One industry that stands to benefit from a global green economy is “rare earth metals.”

China has the power to stop every technological and electrical industry in the world and plunge the planet into the dark ages any time it wants, an expert has warned.

Dr. Jeffrey Wilson, research director at the Perth USAsia Centre, said that China owns around 80 percent of the world’s supply of critical minerals – which is a “powerful weapon”.

However, one of the benefits of a warming planet is that countries like Greenland are sitting on a mountain of “rare earth metals” that are underneath the melting glaciers.

The melting of Greenland’s glaciers is just another example of trying to look at the “bright side” of a warming planet. This certainly does not imply that we, as global, responsible citizens let our guard down and become more lackadaisical about the need to heal the earth. However, it does offer the potential for numerous investments and explorational opportunities.

REMX (an ETF that I recommended to my subscribers, months ago) invests in rare earth metals. The price has risen nearly 400% since March 2020.