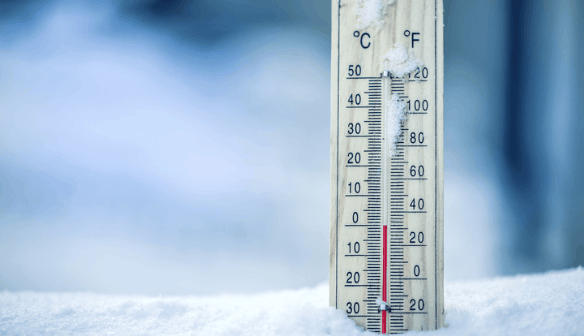 The polar vortex is a large area of low pressure and cold air surrounding both of the Earth’s poles. It ALWAYS exists near the poles, but weakens in summer and strengthens in winter. The term “vortex” refers to the counter-clockwise flow of air that helps keep the colder air near the Poles. Many times during winter in the northern hemisphere, the polar vortex will expand, sending cold air southward with the jet stream (see graphic above). This occurs fairly regularly during wintertime and is often associated with large outbreaks of Arctic air in the United States. The one that is ocurring this February is similar to many other cold outbreaks that have occurred in the past, including several notable colder outbreaks in 1977, 1982, 1985 1989 and early 2014.

However, there is still no question the planet as a whole is warmer than it was during these infamous cold years and does NOT change the feeling of 90% of all scientists that Climate Change and global warming have affected our oceans and planet. WInters are still not nearly as cold as they were in the 1970s and 1980s when Florida had frequent freezes. One month of severe cold does not change the fact that the earth has been warming for years with an increase in hurricane activity, wildfires, and other signals.

This is how I predicted the Polar Vortex, about a week before most weather forecast firms. My in house software Climate Predict uses sophisticated teleconnections such as La Nina, Arctic temperatures, and weather events thousands of miles away.

Here was my prediction in mid-January for the month of February looking at certain La Nina events and the warming arctic resulting in a negative Arctic Oscillation index (AO) and the polar Vortex coming south.

Notice the 1960 analog. This will be important for grain and energy traders in the months to come.

Snow cover can enhance colder temperatures. Look at the forecast for later the weekend with sub-zero Midwest cold, the first time in years.

What is the Arctic Oscillation Index?

This has to do with surface temperatures over the Arctic. Without going into too much technical detail, warming over the stratosphere (some 30-50 miles up) can cause the Arctic Oscillation to turn negative forcing the Polar Vortex south. Notice on the map below that during November and December there was cooling over the North Pole. The Polar Vortex remained there resulting in a very warm early winter and a positive, not negative AO index? Notice how things have changed now and may continue into March.

AO INDEX HAS GONE NEGATIVE BUT WAS POSITIVE MOST OF THE FIRST PART OF THE WINTER, WHICH WAS A WARM SIGNAL

I began predicting up to a foot of snow for the Northeast 10 days ago due to the warming Arctic and overall jet-stream pattern. This has the energy market, including natural gas on fire. Some areas will have more than 2 feet of snow when the storm wraps up today.

However, here is the look for a potential another major snowstorm by February 7th or 8th,

You can see predictions for up to another 1-2 feet of snow in the Northeast by February 7-8th. This will continue to shut down travel and help certain energy markets.

How does a conservative trader take advantage of this being the first major cold in several years? What sort of options strategies can one take to offset risk and what is my longer-term view? For that, I advise you to sign up for a 2 week FREE trial period to get the best weather information and commodity trading strategies available. Or for just $99 a year receive my monthly Climatelligence newsletter.

Other than natural gas there are other energy plays that we advise in for clients.