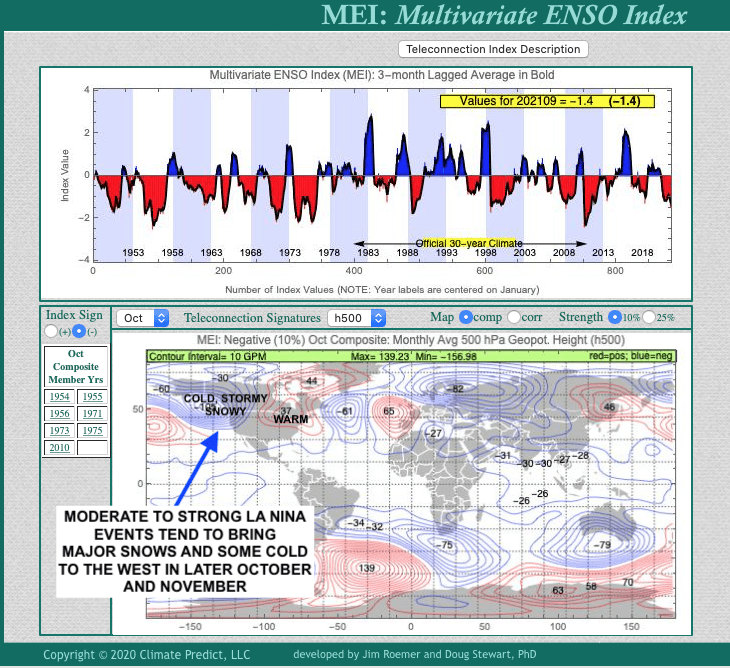 CLICK ON THE VIDEO ABOVE TO HEAR ABOUT LA NINA, SUGAR PRICES, THE EASING OF THE BRAZIL DROUGHT, AND THE BIG WESTERN STORM BY OCT 26TH

Commodity markets have been in a major bull run for the past year or so inspired by a surge in precious metals such as silver and copper, a rebound in crude oil prices, and a recent soaring natural gas, sugar, coffee, cotton, and wheat market.

The record hot U.S. summer is an indication of Climate Change on steroids. The western U.S. drought helped to exacerbate the summer heat and help natural gas prices soar. Why? Hydropower was cut off to the west, and natural gas was the alternative. An active hurricane season in the Gulf and historical tight supplies of natural gas in Europe and Asia have resulted in strong LNG natural gas exports from the U.S.

However, over the last two weeks, natural gas prices have fallen sharply inspired by my forecast of a warm late fall and weak demand. Plus, the drought out west will be easing a bit. This will allow electric companies to switch back to hydropower following the historical summer drought. This will not happen right away, and a lot more rain will be needed, but it is a start.

Sometimes weak La Nina events or east-based La Nina Modoki can bring major cold weather to U.S. energy areas. However, as I pointed out to Weather Wealth clients the last few weeks, my expectation is not for an east-based La Nina Modoki but a potentially moderate to strong standard La Nina. What does this mean? Rather than the cool ocean temperatures in the equatorial Pacific being close to Peru, the cold waters will be spread out equally. You combine La Nina with the historical drought out west, and my computer program Climate Predict suggests a warm late fall and early winter. This has caused everyone and their dog to “run for the hills” if they were long natural gas on the hot summer and tight stocks.

Stay tuned, however, certain types of stronger La Nina events can in fact bring a cold December or January. So, we do not want you to miss some of the trading opportunities we will have for Weather Wealth clients.

Shown below are all La Nina events and the tendency for winter cold to be mainly over parts of Asia, Europe, New England, and much of western Canada. Is this written in stone? Of course not. I am sure there will be some occasional cold periods and trading opportunities in natural gas and heating oil in the months ahead. However, it will be important to monitor what is also happening with Sea Ice over the Arctic, as well as many of the teleconnections (climatic variables) listed in blue, below.

One of my strongest and successful recommendations to Weather Wealth clients, was selling natural gas in early October, based on my warm October and November forecast. However, prices may have fallen too far too quickly, especially with all of winter still ahead of us.

CLIMATE PREDICT PREDICTED THE EASING OF THE BRAZIL AND WESTERN U.S. DROUGHT

While the media has been touting that La Nina conditions might intensify the Brazil drought, it has really been deforestation in the Amazon that was the main culprit of record low water levels from Parana to Sao Paulo. While some La Nina events can bring droughts to northern Brazil, it is usually southern Brazil and Argentina that have dryness between October-January during La Nina events–not northern Brazil

Warm ocean temperatures in the eastern South Atlantic is called the TSA index. The combination of a moderate to strong La Nina and certain weather conditions over Antarctica called a positive AAO index helped us predict the easing in the northern Brazil drought, more than a month ago. Indeed this past week, that has been happening.

Prices for sugar (for example) have begun to reat negatively to the easing Brazil drought, following a major bull market. La Nina could bring crop problems for corn and soybeans later this year or in early 2022

So how do you take advantage of my long-range weather forecast and investing? I invited you to a free issue of CLIMATELLIGENCE: