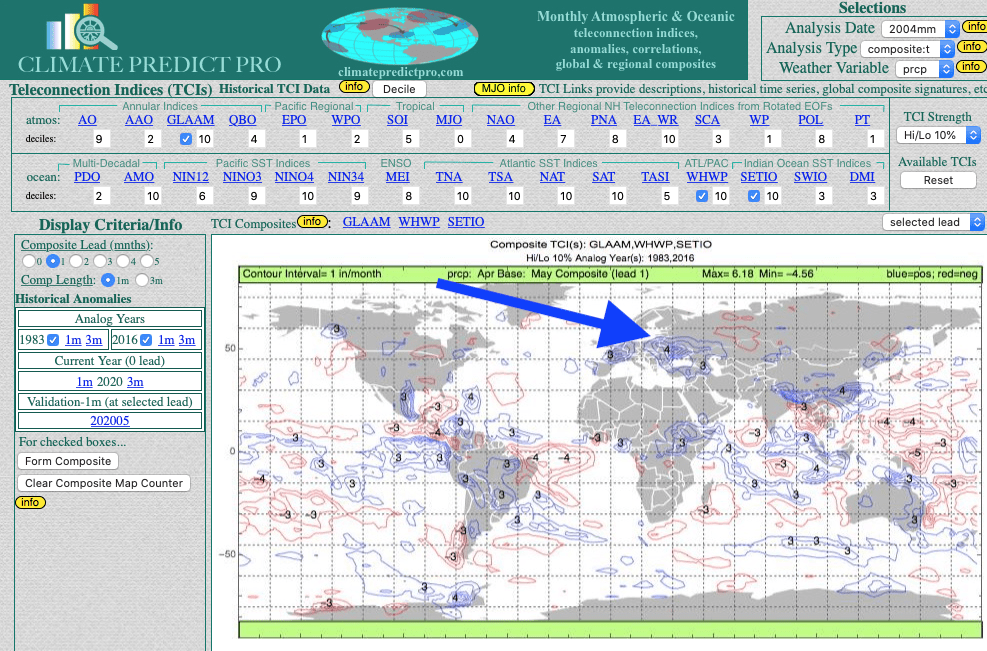 There has been much talk about Ukraine wheat being under great stress from drought. In the map below, one can see the stress regions (red) as of a week ago. However, I have been in the camp for weeks that important rains will be coming to key wheat areas of Europe and Ukraine. Above is my Climate Predict weather forecast program looking a head a month into May, from early April. It looks at the present weak El Nino conditions and other global ocean temperatures and climatic patterns.

Here is the FREE version of Climate Predict.

Any further restrictions of the country’s grain exports could speed up trade with Black Sea producers Russia and Kazakhstan. This would deplete their grain export quotas earlier than anticipated.

Concerns over COVID-19 and Ukraine’s need to feed its people is behind this more than the present dry weather. However, export bans of grains sent wheat prices soaring during the great Ukraine/Russia summer drought of 2010.

Those of you who are old enough will never forget 1986’s great nuclear disaster in Kiev (capital of Ukraine). This created a global panic in wheat prices.

Ukraine continues to be one of the largest producers of wheat in the world. However, since 1986, other countries such as China, France, Germany and Canada have increased wheat production. The impact of the country’s wheat production on global wheat futures prices has thus been “muted.”

The last full fledged Ukraine and Russian drought was back in the summer of 2010. This drought affected a much greater region than is experiencing drought now. Fires were reported through Russia during the summer of 2010 and major export bans of wheat and other crops occurred.

One of the worst food crisis ever in Russia was during the 1972-73 season with the most severe recorded drought ever.

So the question many wheat traders are asking are 1) Will this present Ukraine dryness extend into summer and expand throughout the rest of Russian grain areas? 2) What are the reasons that potential Ukraine export restrictions could occur for wheat and corn?

Again, my long range weather forecast software (Climate Predict) has been 2-4 weeks ahead of standard weather models, that are now showing big time rains for much of Europe and Ukraine into early May.

Could a situation this spring and summer, which occurred in 2010 happen again?

Stay abreast of all global weather updates and my opinion about multiple markets and join traders and farmers around the world who are subscribing to WeatherWealth. Get a FREE 2 week trial at the bottom of this page.

Right now, I do not see the weather situation being like 2010 (above) in which grain export bans occurred strictly due to dry weather.