IS THE WEST’S MEGA DROUGHT A NEW NORMAL? 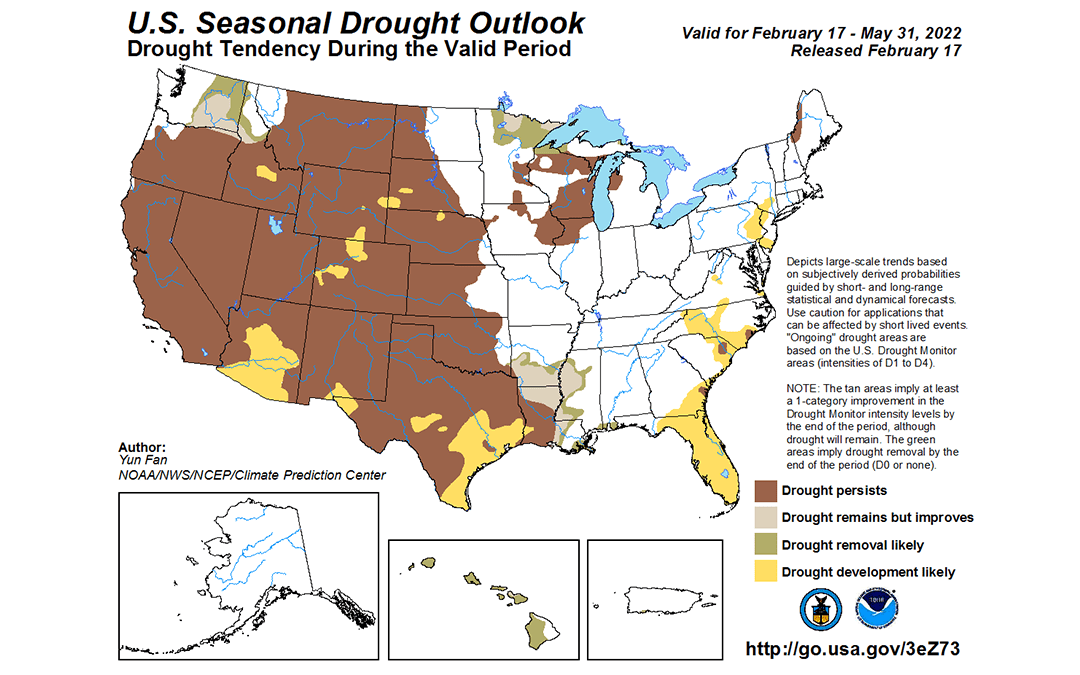 A drought in the western United States looks likely to continue through May, according to the outlook from the U.S. Drought Monitor. As of February 15, 2022, abnormally dry or drought conditions exist in 57% of the lower 48 states.

Researchers found that the 22 year drought period between 2000 and 2021 was the driest since 800 C.E., according to a study published this week at Nature.com. Anthropogenic (human-made) climate trends accounted for 42% of the southwestern North America soil moisture decrease in 2000–2021.

La Nina conditions have impacted snowfalls in the Canadian and U.S. Rocky Mountains and there are already concerns over water for irrigation and other needs in California, Colorado, and other areas. The Bureau of Reclamation’s February forecast predicts that the April-July runoff for the North Platte project will be only 80% of the 30-year average. As a result, the Bureau does not expect water allocations to be released to its contractors. The North Platte project feeds full irrigation to 226,000 acres and provides supplemental irrigation to 109,000 acres in Wyoming and Nebraska.

How Could this Mega Drought Impact Crops?

Over 70% of the winter wheat-producing areas in Kansas, Texas, and Oklahoma are in drought conditions. Meanwhile, Eastern Europe also is experiencing relatively low precipitation. Wheat comes out of dormancy in the spring and moisture is key, so continuing dryness could impact the wheat market. As seen in the map below, dry conditions also have plagued the Canadian plains for the last month.

What happens in weather in April through June in the West and Midwest is important for corn and soybeans, too. Planting on the Plains starts as early as mid-April. Drought conditions in Argentina and Brazil have pushed soybean prices higher recently. Is a repeat in store for the U.S. crop?

Evaporative Demand Drought Index for the last month from NOAA. An ED4 category signifies that similar conditions are expected in only 2% of this time period.