Hurricane Michael: How the loop current and MJO caused his development. What about cotton?

Hurricane Michael was gathering strength on Tuesday it entered the southeast Gulf of Mexico, en route to an expected Wednesday landfall on the northeast Gulf Coast.   A hurricane warning was in effect for the entire upper Florida coastline from the Suwanee River westward, with the Alabama coast in a hurricane watch. Storm surge watches and warnings extended further to the east, because of the surge-producing characteristics of the Florida coast and remaining uncertanties in Michael’s exact strength and track.

The storm is expected to become a category 3-4 hurricane before it hits land.

A damaging storm surge for the Florida Panhandle and Big Bend is expected for the northeast Gulf Coast of Florida from the Okaloosa/Walton County Line to Anclote River. This warning was bracketed by storm surge watches westward to the Alabama border and southward all the way to Anna Maria Island, including Tampa Bay.

There are very shallow waters along the coast where Michael is expected to make landfall, where the continental shelf extends out about 70 – 90 miles from shore. The winds from the storm will thus be able to pile up a large storm surge along the east side of the storm’s center. When this surge rides ashore at landfall, the water may reach heights of 8 – 12 feet in Florida’s Apalachee Bay—part of the Big Bend region between the Florida Panhandle and the southward-jutting Florida Peninsula—since the concave-shaped coast there acts to concentrate storm surge.

When Category 3 Hurricane Dennis made landfall in the western Florida Panhandle near Santa Rosa Island in July 10, 2005, it brought a storm surge of 6 – 9 feet to Apalachee Bay, which lay 170 miles east of Dennis’s landfall location. The surge inundated parts of the town of St. Marks and other nearby areas. A storm surge of 4 – 6 ft occurred elsewhere in the Florida Panhandle.

High tide is between 12:30 – 1 am on Wednesday and Thursday at Pensacola, FL. There is only one high tide per day in the Gulf, and the difference between high tide and low tide is just over one foot. The high tides in the Gulf this week will not be increased by the fact that the new moon occurs on Monday. This is unlike the situation along the Southeast U.S. coast, whsere the new moon will bring the king tides—some of the highest tides of the year. Because of the king tides and the onshore flow of air affecting the Southeast U.S. coast from Michael, we are likely to see moderate coastal flooding in Charleston, SC during high tide Tuesday through Wednesday.

The report below explains why Michael has formed, and can strengthen even more than some models suggest, by mid week. This is in contrast to my earlier feelings last May and June that a major hurricane would probably NOT hit the Gulf coast this season. The report also highlights why the U.S. cotton crop will be hurt by heavy rains, not only in the Southeast U.S. but also in Texas, something we alerted clients to quite early.

(some of the information above are excerpts from weather underground.com) 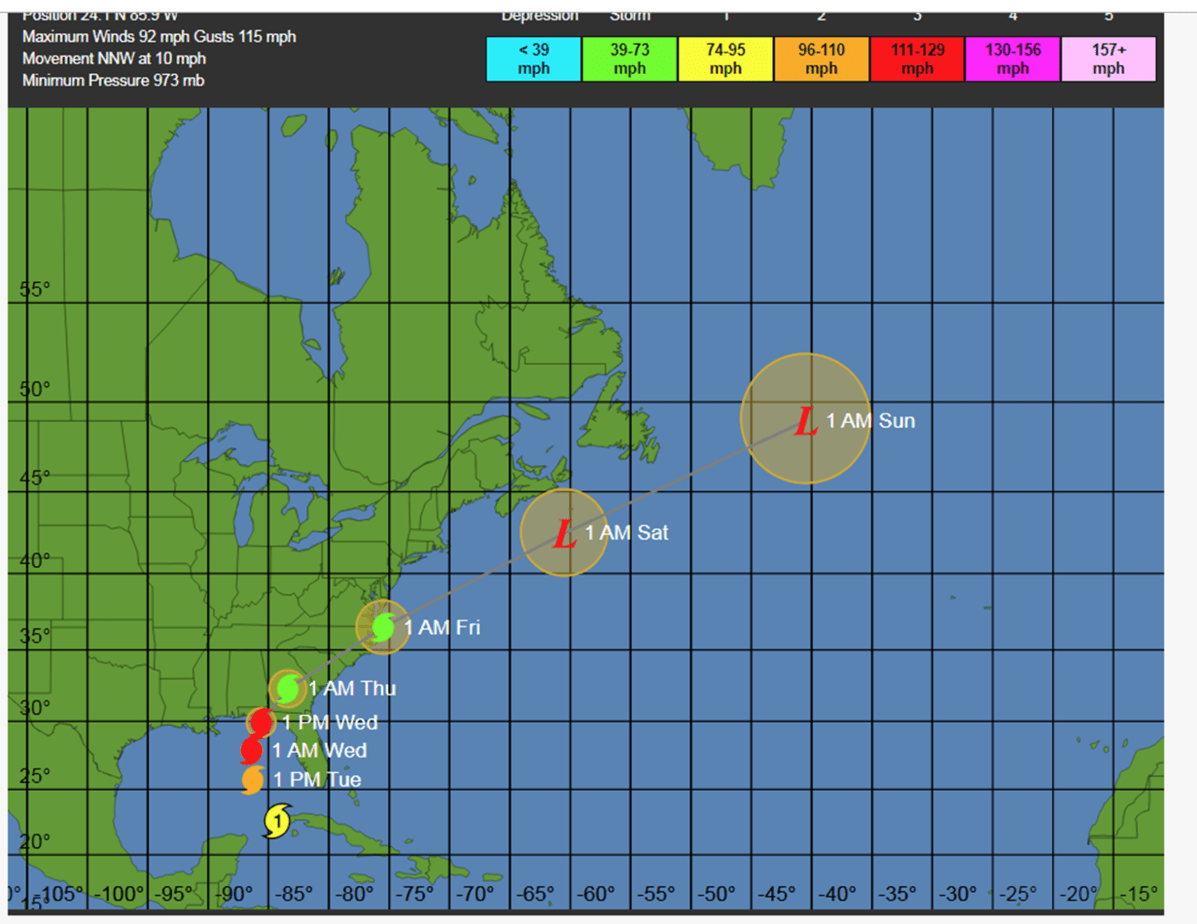 Back in May and June we discussed a weaker than normal hurricane season. This was due in part to cool ocean temperatures off the coast of West Africa and also a possible formation of El Nino. As it turns out, waves off the west coast of Africa, which normally impact the hurricane season through October, have indeed been weaker than normal. Though Florence brought catastrophic flooding to the Carolina’s, up until Hurricane Micheal, there has NOT been a major strike of a hurricane in the U.S. this summer or fall.  The warming climate, which has strengthened the LOOP current in the Gulf of Mexico, plus perfect timing of the MJO in a phase 8/1 are the reasons Michael formed out of nowhere. A good explanation of the LOOP current is here. 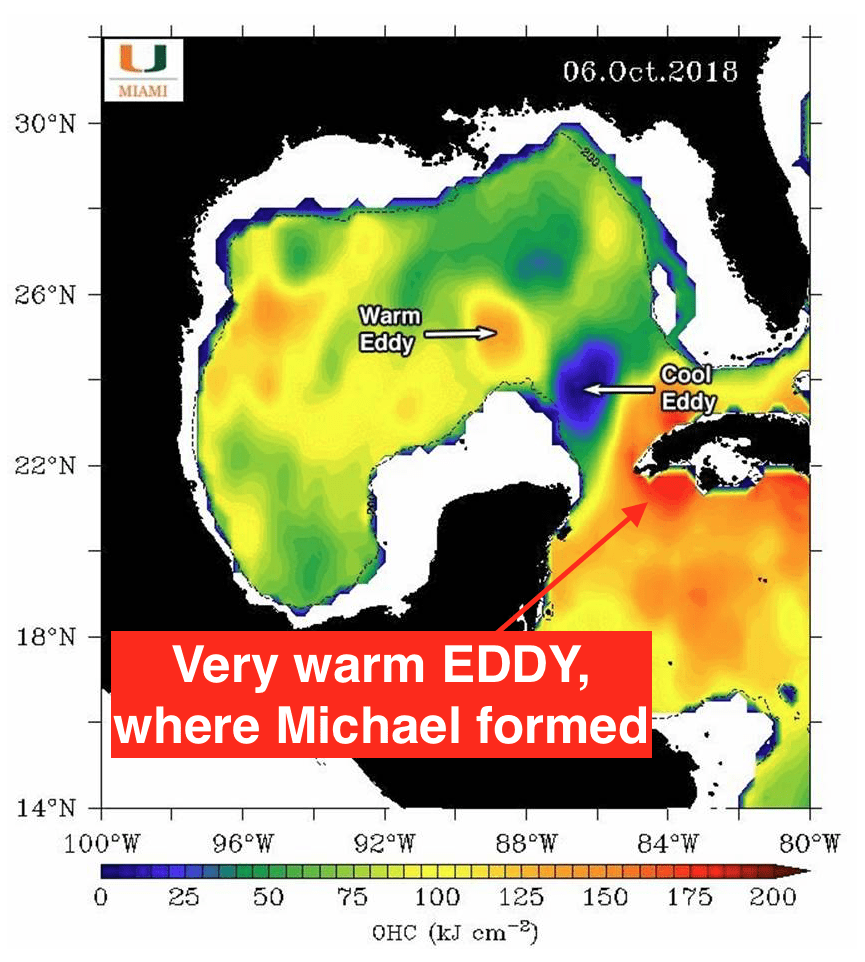 The MJO and its influence on hurricane development

The MJO (more info here)is a tropical wave phenomenon that can influence the weather thousands of miles away. It has been known that the MJO in phases 8, 1, 2 (eastern Pacific and western Atlantic) can enhance cyclonic activity and sometimes tropical storms. The combination of the warm Gulf Coast LOOP CURRENT, described above and the perfect timing of the MJO in these active storm phases, helped to form Michael. This is in contrast to a potential forming El Nino and cool ocean temperatures off the coast of Africa, that helped us forecast a less active hurricane season than 2017, last May and June.

The cotton market has been in the dog house for two months, mainly because of worries over Trade War Tariffs against China, but also a huge net long position in the market that has resulted in technical selling. However, our weekly Climatelligence newsletter became a bit more friendly this market a week ago on worries about too much rains in west Texas, a possible reduction in the India or Pakistan crop from minor weather issues and an oversold situation. Now with hurricane Micheal affecting the harvest in key states of Georgia and South Carolina, cotton prices have bottomed, for now. However, often weather related bullish cotton moves on hurricanes is short-lived.

Nevertheless, how the U.S. harvest fares over the next few weeks could have an impact in the cotton market. Most recently, we have seen an explosion in coffee futures, natural gas and other commodities, which we pointed out could happen. Join the dozens of enthusiastic commodity traders and farmers that have sampled or subscribed to our unique  new newsletter here. 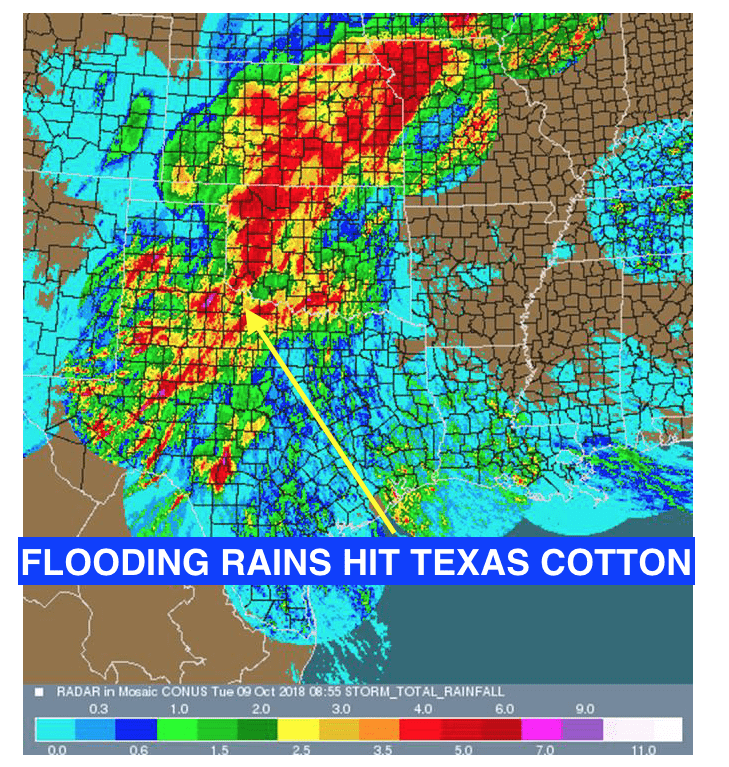 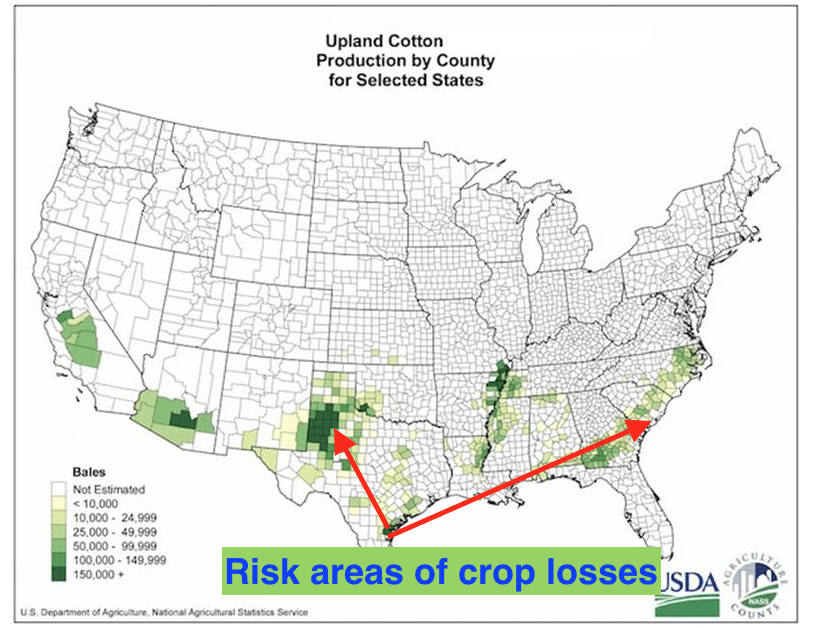