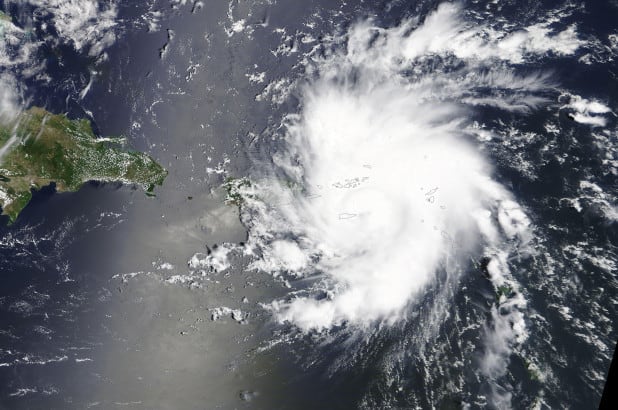 I mentioned a few days ago to clients that Dorian would likely explode more than models suggested. Indeed, as of this writing, she is now a category 4 hurricane–tremendous explosion in less than 12 hours. This rapid development and lack of any major steering currents aloft (as was the case with Katrina, Michael, Irma, Andrew and many others, which were easier to predict), could potentially cause Dorian to be much further east then all computer models have suggested. This would be very unusual that all standard computer models used by meteorologists, are a bust. BOTTOM LINE–Much of the State of Florida is being shut down till next Tuesday, but Dorian may create its own wind flow and track pattern due to mesoscale features not picked up by computer models. Hence, much of Florida could be spared the worst of the storm, but residents along the Southeast U.S. coast should be on greater alert. The Bahamas will have one of the worst recorded hurricanes on record with incredible devastation potentially.–Jim Roemer

I recently posted a blog about why African dust and the Amazon burning up, could have some partial influence in reducing the Atlantic hurricane season, particularly for Texas, Mexico and perhaps Puerto Rica this season.

However, this is the main time of the year for the Atlantic hurricane season and a lingering weak El Nino Modoki and warming oceans are key factors in upcoming hurricane threats for Florida and perhaps the east coast this fall. An El Nino Modoki is a west based type El Nino, in which ocean temps west of the dateline are warmer than normal but cooler than normal near Peru.

Take for instance the infamous Florida hurricane season of 2004. My Climatech program (above) shows all of the hurricane tracks that summer/fall. These storms decimated the Florida citrus industry and then citrus canker made things even worse the last 5 years. Total ACE was 255 with 15 hurricanes and several major ones.

In contrast, look at the inactive hurricane season of 1994; another El Nino Modoki (below). Total ACE that year was only 37. Since 1994, the oceans have warmed considerably possibly adding fuel to the fire to spark greater hurricane development

What about Hurricane Dorian , commodity markets and the rest of the hurricane season?

Commodities such as orange juice, lumber and possibly cotton could see some short term affects from Dorian as it moves through Florida and possibly into southeast U.S. next week. However, often, these type of commodity price moves are short term, knee jerk reactions and not major longer term influences in commodity prices. Natural gas has been rallying on the potential for LNG exports, cheap natural gas prices, some recent hot weather that has slowed production a bit and worries about the hurricane season. However, I doubt if Dorian will have any major impact on U.S. natural gas production and with cooler weather on the way for much of the U.S., any further rally in natural gas prices would likely be due to NON weather factors. It is the Florida citrus industry and other agricultural regions that stand to be the most adversely affected. However, these hurricanes can play tricks at the last minute and veer in directions sometimes not detected or predicted by models (yes, even with the billions of dollars poured into research and computer moderization).

The ocean heat content is high enough that Dorian could explode into greater than a CAT 3, even a CAT 5 hurricane before it hits land. The 2nd map (below) illustrates historical storm tracks with hurricanes and tropical storms in a similar position to where Dorian currently is (As of Thursday a.m. 8/29/19). Notice that some of these paths are further east of Florida and not an issue to the Sunshine State, while others are in the Gulf. However, I doubt we will see the west coast of Florida or Gulf affected by Dorian.

Hurricanes can change course on a “dime”, like what happened with IRMA several years ago. At the time, warnings were up for the east coast of Florida and Miami and as I pointed out to clients and those just concerned about the storm, I mentioned it would likely take a more southerly track towards Cuba and then the west coast of Florida. This indeed happened. There is only a slight chance that Dorian could move into the Gulf of Mexico, based on the historical chart you see above. But again, it should stay far enough way from key natural gas and crude oil production areas.

So how about Hurricane Dorian? Its track will be dictated by an Atlantic ridge, how strong it is and also the ocean temperatures closer to Florida.

I look for models to initially trend a bit further south, similar to the European model over the next few days. Severe flooding could affect the Everglades and parts of central and southern Florida. If Dorian slows down and drifts further south towards the warmer pool of air, she could be stronger than a CAT 4 at landfall. The three charts above show the upper level steering currents for hurricane Irma (right); infamous hurricane Andrew (center) and for hurricane Dorian (left). The fact the upper level winds are not as easterly as they were for Andrew and Irma will hopefully spare the Gulf coast a major strike, with Dorian probably closer to Miami, but could then stay further east along the eastern Florida coast and up the Atlantic Seaboard.

Here is one of the models Hence, residents of south Florida and possibly along the east coast could see severe flooding.

The track above of Dorian could initially be further south then some models suggest due to the warmer waters over southeastern Florida and near Cuba and the ridge in the Atlantic. However, while most models have Dorian as a CAT 2 hurricane, the warming oceans, brought on in part due to global warming could explode Dorian to a CAT 3 or stronger. If this happens, it could affect and change its track. Jim Roemer