With President Trump’s Political ratings in the tank, even in the midst of a strong U.S. economy and a major rally in the stock market since he took office, it was imperative that some sort of Trade Deal be worked out. The tentative new NAFTA Agreement (article here) with Mexico and not Canada has some agricultural markets perking up early this week.

However, just as important for the corn and soybean market is how quickly the U.S. harvest advances to bring in yet another bin breaking, record crop this year. My bearish attitude in corn and soybeans since summer , on my early forecast for ideal summer weather for crops, was of course helped by the unfortunate set of circumstances surrounding the Trade War with China and other countries. However, this all changed two weeks ago due to my trade signals from our Best Weather Spider, inspired, in part with what could be one of the wettest first half of October’s for Midwest grains in years. A phenomenon called “shattering” could become a serious issue for soybeans in parts of the western and northern corn belt. 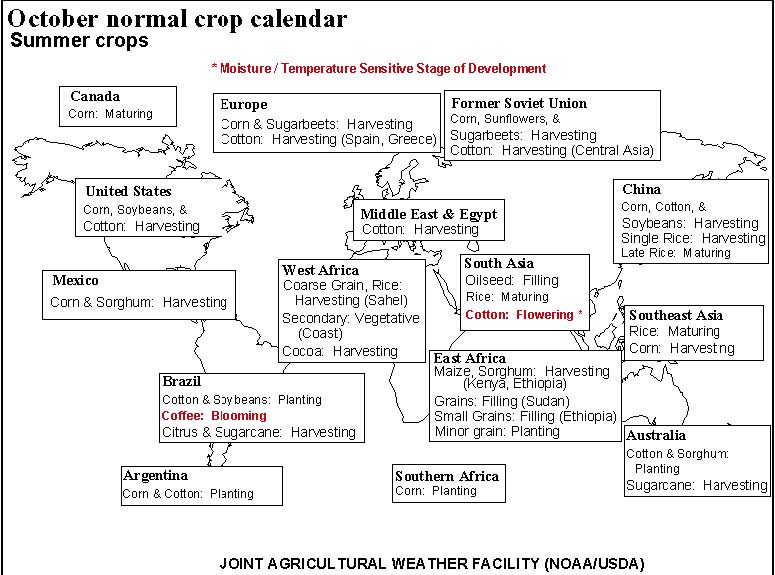 October is the key month for the U.S. corn and soybeans harvest

My BestWeather Spider, which gauges the impact of global weather, technicals and Shawn Hackett’s Smart Money indicators with respect to the commitment of traders and other algorithms, is shown below. It began becoming bullish corn and soybeans about 2 weeks ago. Subscribers to our weekly Climatelligence Report (here) will get uncanny weekly weather forecast accuracy and market advice in many commodities. 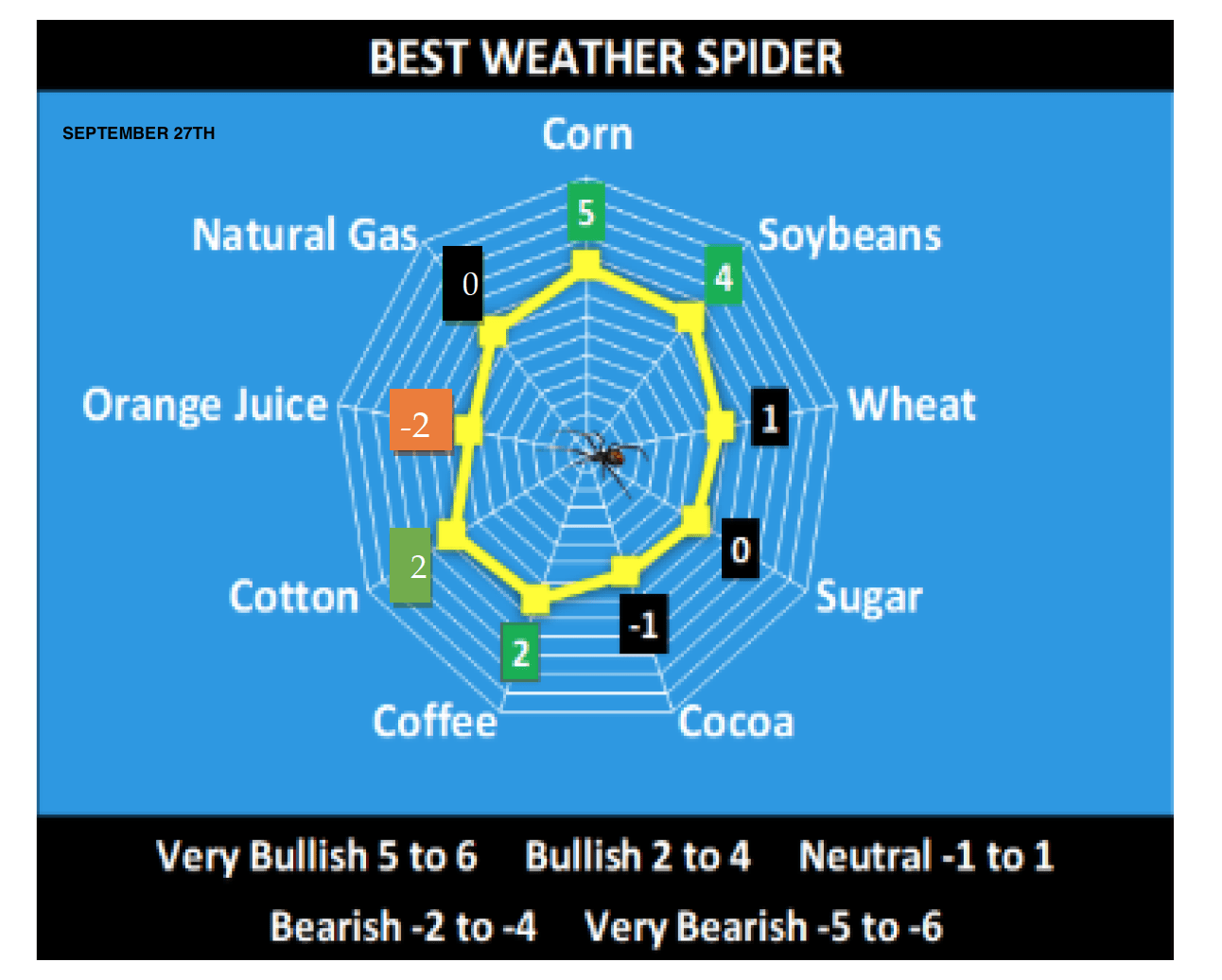 A very wet weather pattern will disrupt in the Midwest corn and soybean harvest for at least another two weeks. This is a scenario we began telling clients in mid September might occur this year. The first meaningful rainfall in months will hit much of the SW U.S. into Colorado and Utah this week. This is inspired by Tropical Storm Rosa. In fact, the season’s first snow could fly in some ski areas across the west by this weekend. While too early for ski slopes to open, of course, it could be a prelude to an early winter out west. 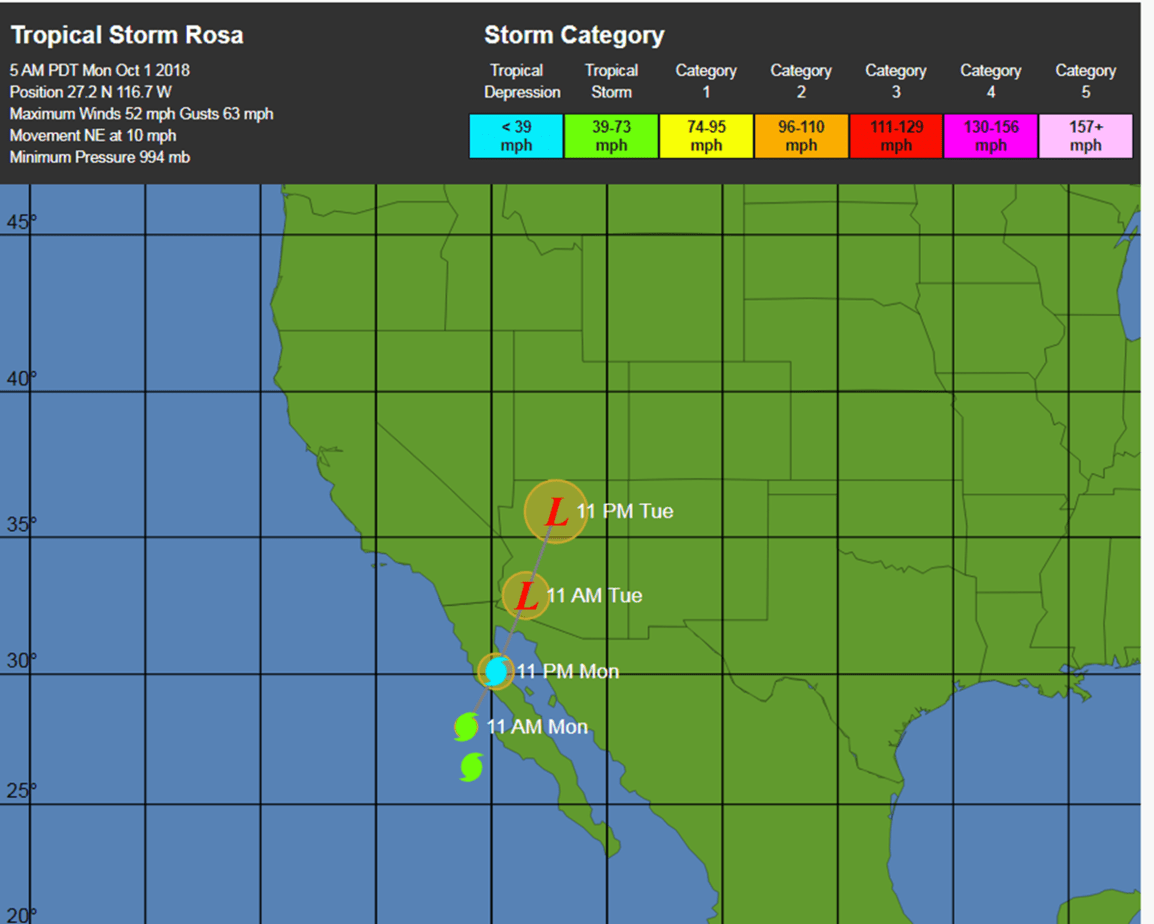 Besides the remains of Tropical Storm Rosa, our in house weather models and historical research point to other climatological factors that could cause upwards of 4-8″ of rain the next 2 weeks in the heart of the Midwest corn and soybean belt. We tend to be quite early and often ahead of the crowd when it comes to second guess models. Hence, you will want to stay abreast of our forecasts, because any sudden change to dry weather and improved harvesting activities for corn and beans, could send this market reeling south again. However, for the next week or two at least, we look for corn and soybeans to be well supported on this wet weather idea. 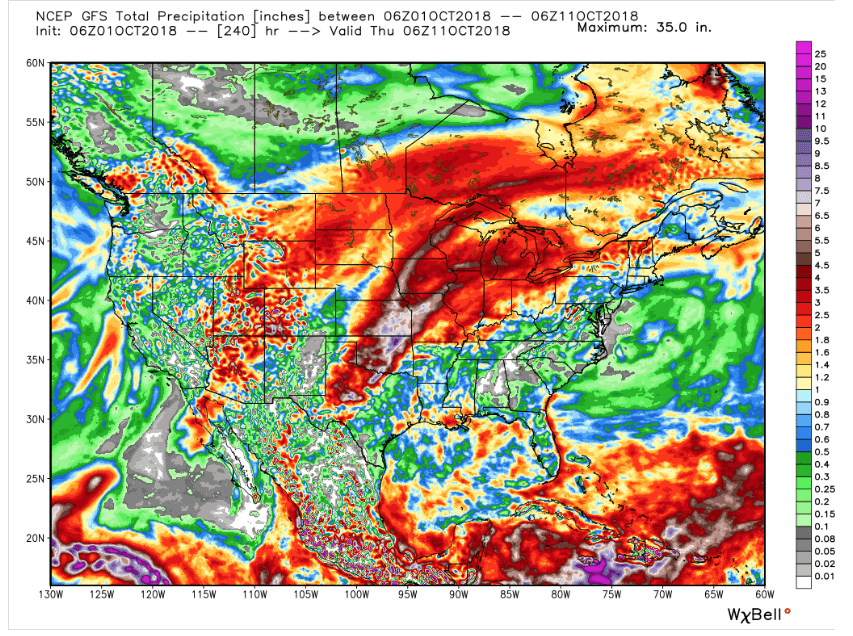 Rainfall projections in inches the next 10 days or so, is consistent with our forecast made in mid September. This will be a benefit for U.S. wheat planting as the drought in the Plains is breaking. However, it will  cause potential major concerns for parts of the northern and western Midwest corn and soybean harvest.