How a weakening La Niña and positive Indian Dipole are creating new worries for global grain crops. Will it last? 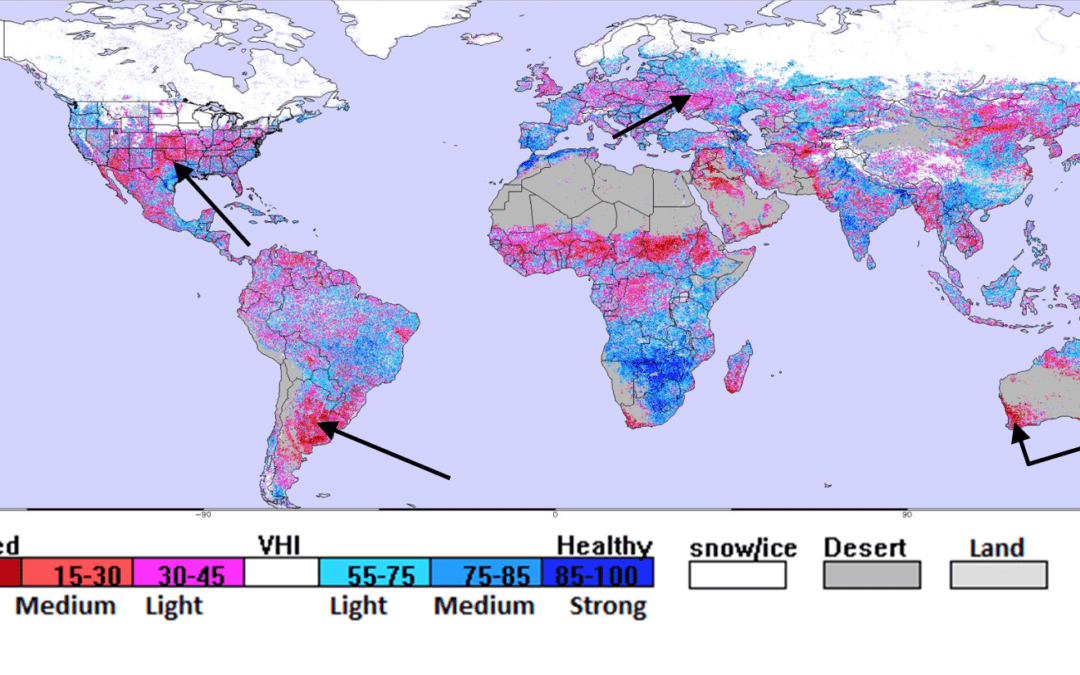 Growing weather problems around the globe are adding a bullish spin on grain prices. But questions remain about a weakening La Nina and if May rainfall  will increase in drought stricken areas of Texas to Kansas.

Wheat, in particular, has been in a major down trend for several years. With global stocks still near historical high levels, it will take reduced crops in other parts of the world (not just the drought stricken U.S. plains crop), to stimulate an authentic bull market in wheat. This may happening, finally. The the Climatech screen shot below (Figure 3.) addresses ‘stressed-versus-favorable’ wheat crop conditions. It illustrates problem areas (arrows) not only for the U.S. plains, but for planting in Australia and the developing crop in parts of Ukraine and western Russia. Some important rains may fall in Russia in a week or two and it is possible traders will focus on this, unless weather problems worsen.

For U.S. corn and soybeans, however, wet warm weather through May could cause a bearish spin on prices, after our bullish attitude all winter on strong demand and the worst Argentina drought in years.

It is atypical for Australia to be in a four month drought during a weak La Niña. 75% of the time, this would result in good soil moisture for cotton, sugar cane and wheat. However, there a few exceptions, and this year is one of them. The Indian Ocean Dipole (Figure 1.) is a climatological phenomenon that can significantly effect Australia’s weather. The IOD has been unusually positive for several months. Normally, this does not happen during a La Niña. The upshot has been an extensive drought now covering many important growing areas. Consequently, according to all models below, the IOD will turn negative by summer (Australia’s winter). 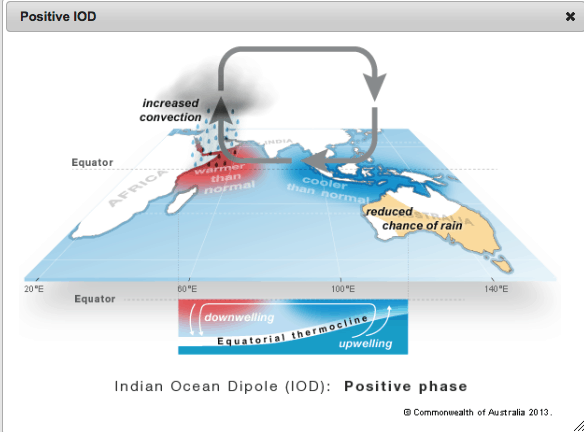 The Indian Ocean Dipole: When ocean waters warm to the east of Africa and cool over Indonesia, the IOD is positive reducing rains in Australia. While this often does not happen during a La Niña event, it has the last few months resulting in a much drier solution for Australia where wheat planting is not jeparadized.

All forecast models suggest that the IOD will turn negative by summer. If so, it will bring relief to Australia in a few months, but Russia could have weather issues later this summer. That could result in the first decrease in Russian grain crops since the 2010-2011 season. However, standard computer models are beginning to show rains in Russia first. Otherwise, wheat prices could explode. 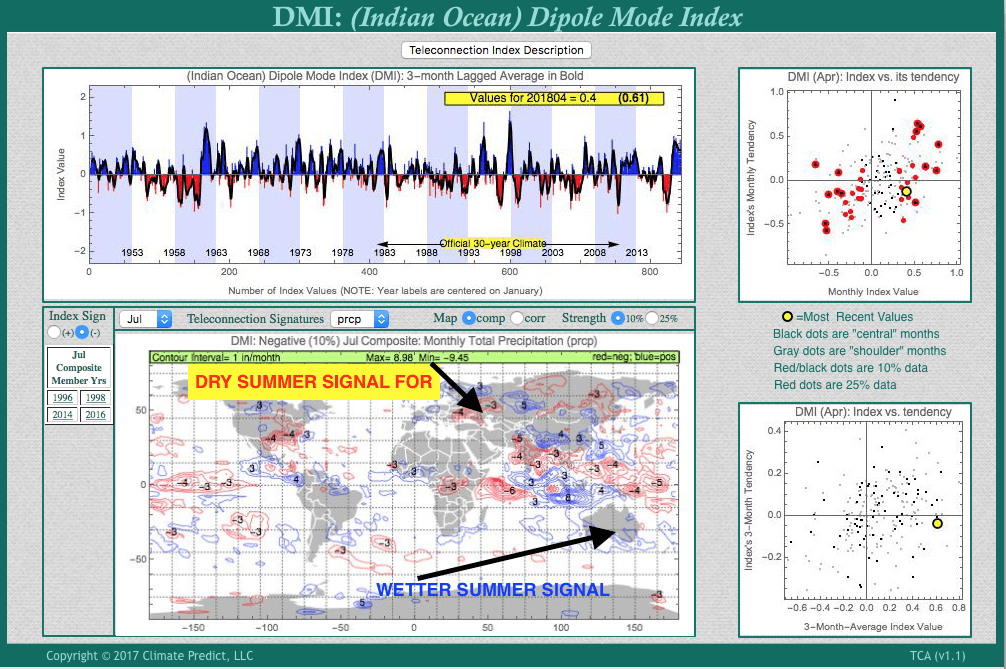 If the IOD does go negative, the result would be improved moisture for many Australian grain areas. However, it is problematic  that wheat will be planted in dry soils in coming weeks, prior to dormancy setting in and before winter rains and snows occur. Depending on Australia’s weather in September through November, when the wheat crop begins to grow again, yields would be greatly reduced “If” El Niño was to form and the IOD does not turn negative.

My greatest concern is regarding parts of Russia and Ukraine. On April 24th, I was early in suggesting to clients that dryness in these regions may begin to gain attention by the wheat trade. A weakening La Niña, as well as teleconnections such as the IOD and others, suggest the Russian grain crop will be compromised.

In fact, as the chart shows below in Figure 4, there have been five back-to-back wheat production increases in Russia.

Figure 5 bears out that there have not been six consecutive Russian wheat crop increases in 30 years. This matches well with our research. 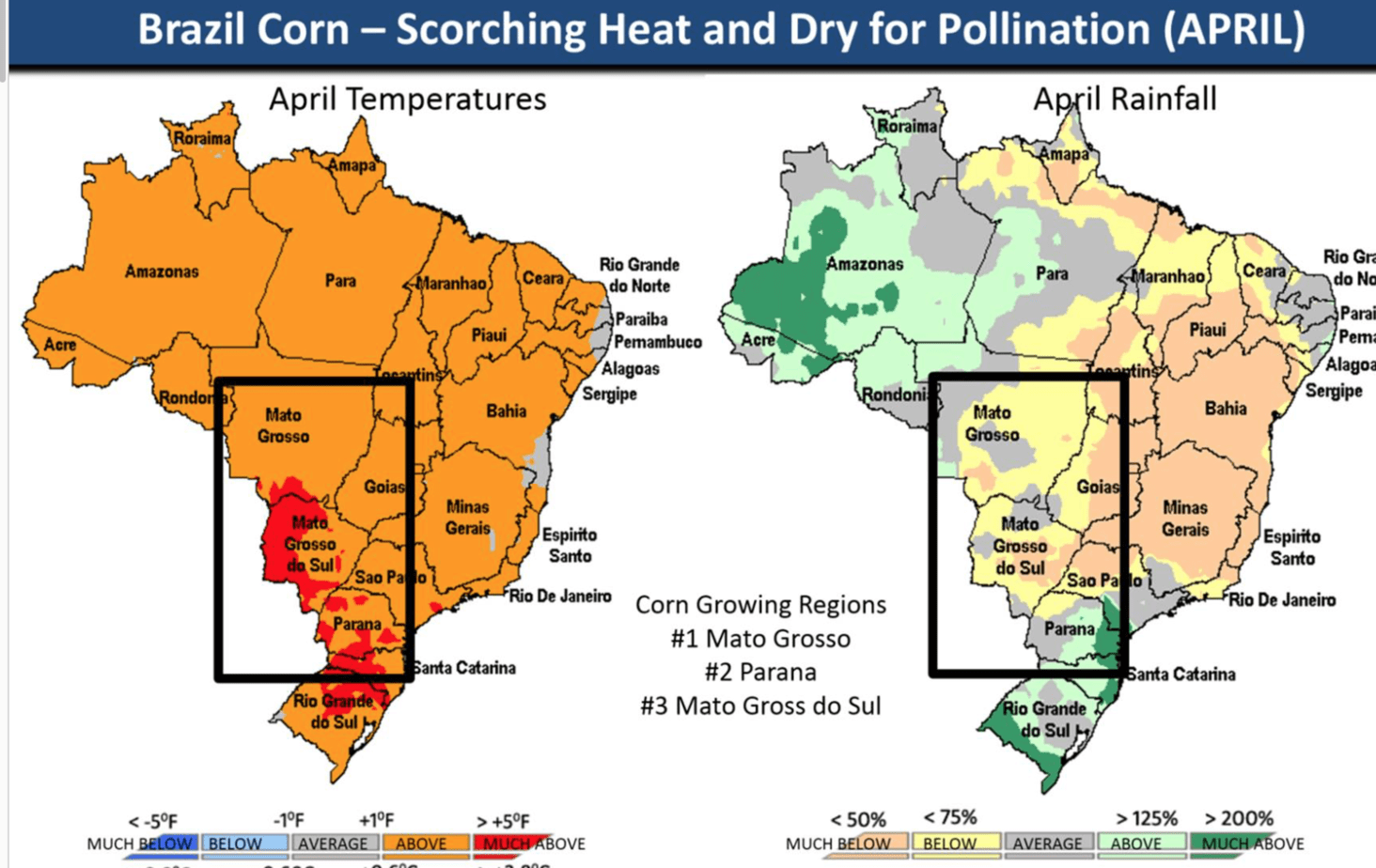 SOURCE OF MAP ABOVE: WEATHERTRENDS 360