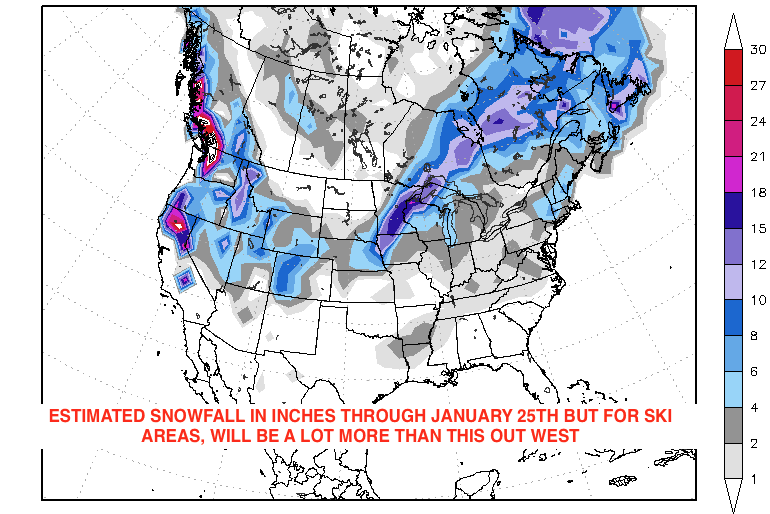 Map from CWG/Stormvista.com. All comments from Jim Roemer

The map above shows estimated snow (inches) through January 25th . However, given my experience forecasting weather for ski areas for 25 years, I can tell you that much of the Sierras, Cascades, Colorado and Utah ski areas will see at least 2-3 feet over the next 10 days or so—Jim Roemer 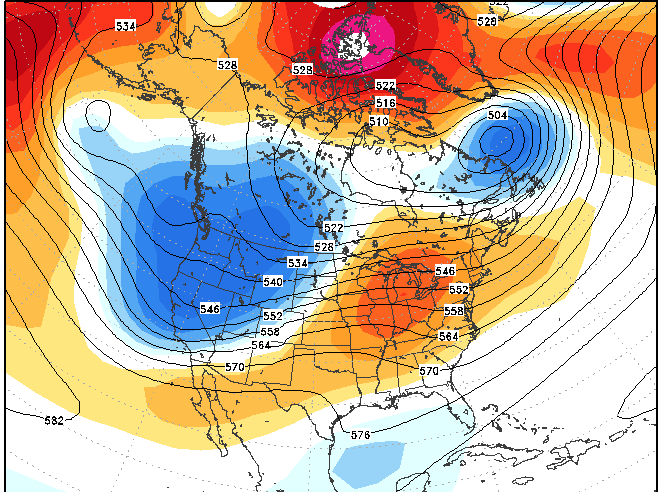 The huge blue trough you see out west will continue to break the western drought but bring more mud-slides to parts of California as well as feet of snow to the west through the end of January.

This season’s feeble ski season from Colorado to Utah and California. This is about to change

The report below is a week old, but interesting nevertheless: a lot of snow has fallen in the western ski areas over the last week with tons more coming. More information about the ski season and historical information on snowfall can be found from the great site www.bestsnow.net and Tony Crocker.

October 2017 snowfall was strongest in the higher elevations of western Canada and the northern Rockies with some lesser amounts in Colorado. First half of November snowfall was high in the Pacific Northwest and inland northern regions, resulting in some early openings and deep snowpacks. There was also an atmospheric river storm mid-November in California. Thanksgiving week brought widespread rain to 9,000 feet to the northern regions, degrading the snowpack at lower elevations. Thanksgiving snowpacks were still over 4 feet at Mt. Baker, Whistler and Grand Targhee.

The farther south you go, the less November snow there was, and some opening dates were pushed back. The western US was under severe sustained high pressure for the first half of December. The week before Christmas brought substantial snow to the Northwest and spread inland to the Rockies as well. Northern Utah and Colorado got a couple of feet but still endured limited holiday skiing similar to 2011-12 and are unlikely to reach full operation before February.

The Southwest still has almost no natural snow on the ground and should be avoided indefinitely barring major dumps. Skiing in other regions acquired an adequate snowpack at higher elevations in November. Lower elevations had a lot of November rain, resulting in variable coverage and surfaces. But the week before Christmas snow brought most Northwest, western Canadian and northern Rockies area into midwinter form. These regions also got a foot of snow Christmas week.

The first week of January saw up to a foot of snow over most of the West, refreshing surfaces but not enough to open much more terrain. Most forecasters believe there will be substantial storms during the second half of January.

An early November storm only snowed more than a few inches north of Lake Tahoe and over 8,000 feet. The second week’s storm was much bigger though also snow mostly over 8,000 feet. Mt. Rose got 4 feet and Mammoth got 2+ feet at its Main Lodge snow plot but 5+ feet up top. Thanksgiving week had a bit of rain followed by warm weather resulting in spring conditions. A foot of snow in late November restored surfaces to the areas with an adequate base over 8,000 feet. With less than a foot of December snow, Mt. Rose and Mammoth continued to have the best skiing, but ungroomed snow was bumpy with more obstacles over the holidays.

Other Tahoe areas have marginal base depths around 2 feet on limited terrain, have been beaten up by holiday crowds and should be avoided until there is much more snow. Early January snow was a foot at Mammoth but mostly rain at Tahoe. A current similar storm is expected to be twice as big and should bring Mammoth close to full operation. See Current California Ski Conditions for more details on Southern California and Mammoth.

The region had some October storms but the rain/snow line was above all but the alpine sectors of Whistler and Mt. Bachelor. First half of November snowfall was widespread and many areas opened by November 18. The Thanksgiving week rain reduced the Mt. Baker and Whistler base depths from 6 feet to 4 feet. Base depths elsewhere were reduced to the 2 foot range. Late November snow improved surfaces and restored about a foot of base lost by the rain.

Much of the Whistler alpine opened Dec. 9 after extensive avalanche control, resulting in twice as much open terrain as anywhere else in North America. The Northwest had a scattered foot of snow during the first half of December but in the second half of December it dumped 3 feet at Mt. Hood, 4 feet at Whistler and 5+ feet inWashington State areas. New Year’s base depths were 4-5 feet at most areas, 6 feet at Whistler and 8 feet at Mt. Baker. There was little snow in early January but about 2 feet is expected this week.

Snowfall was abundant in this region from late October through mid-November. Thanksgiving week rain affected the Okanogan and Kootenay areas, though base depths declined only at Fernie, remaining near 3 feet at most other areas. With 2+ feet of snow in late November/early December, base depths reached the 3-4 foot range. Second half of December snowfall was a bit under 2 feet around Banff but 4+ feet in the Okanagan and Kootenay regions. Base depths are 4-5 feet and this remains the best overall ski region entering the new year. Silver Star and Sun Peaks were 2/3 open by mid-December and in full operation for the holidays. There was little snow in early January but about a foot is expected this week.

Grand Targhee had 115 inches snowfall by mid-November, and thus opened 82% on Nov. 17 and 100% by Thanksgiving. Interior Northwest areas got the rain and December 1 base depths were in the 2+ foot range. Most areas got a little under a foot of snow in early December before the high pressure set in. Second half of December snowfall of 5 feet brought excellent holiday skiing to Schweitzer, Whitefish and the interior Northwest. Southern Montana and the Tetons got 3-4 feet, bringing Big Sky to 90% open. Overall this region was close to full operation for the holidays on 3-5 foot bases, except for Sun Valley which only had 3 inches of December snow. There were a few inches of early January snow with a foot expected this week, more at the interior Northwest areas.

Utah had minimal October snow and was on the edge of November storms. Some opening dates were delayed and any skiing is on limited snowmaking. An early December storm dropped up to 18 inches in the Cottonwood Canyons, a foot at Snowbasin and 6 inches in Park City, but only a little bit more terrain opened. After only a few inches here and there in mid-December, the Wasatch got 2+ feet just before Christmas, but holiday open terrain and season snowfall still fell just short of 2011-12 and were the lowest since 1980-81. Terrain remains limited after a few inches last week, but may improve with 1-2 feet possible this week. Utah probably needs 4+ feet more snow to get close to full operation.

A-Basin opened a run on snowmaking October 13 followed by Loveland on October 20. November snowfall was about half average and all skiing was on a manmade base of no more than 18 inches. A-Basin is 36% open. First half of December snowfall averaged about one foot. The Northwest storm track finally hit at Christmas with 2+ feet from Steamboat through the Continental Divide with less at Vail and Beaver Creek. However, as of New Year’s only Steamboat and Winter Park were more than half open, with most areas only slightly better off than in 2011-12. Vail had less open than any New Year’s since 1980-81. With a few inches last week and about a foot predicted this week it will probably take well until February to for most of these areas to approach full operation. Open terrain now is similar to mid-December of an average season.

This region has been driest of all so far with no end in sight, so all skiing is on limited snowmaking. The Rocky Mountain Biological Lab at Gothic (between Crested Butte and Aspen) had 17 inches in October and 55 inches since, the total being the lowest in 44 years of records. Even Wolf Creek has had just 58 inches (28 of it during the first week of November) and reports 90% open but on a sketchy 19 inch base.

Taos is 14% open. Aspen/Snowmass has similar conditions as the northern and central areas above. Farther south, the first two months of the season were so dry (the Christmas storm was 1.5 feet at Aspen and Crested Butte but less than a foot farther south) that these areas should be avoided before mid-February at the earliest. Advanced terrain is unlikely to be open before then unless there are major dumps. Taos’ Kachina lift and much of Crested Butte’s North Face, needing substantial snowpacks on steep terrain, are in danger of not opening at all this season. Last week’s snow was a few inches and about a foot is predicted this week.

Killington was the first opening on November 8 as there was too much warm weather and rain in October. There was gradual terrain expansion on snowmaking since Thanksgiving but natural snow was mainly in northern Vermont. Second week of December snowfall averaged 3 feet in Northern Vermont and 2 feet elsewhere, setting up the region for a very good holiday season. The Northeast averaged 2 feet of snow during the second half of December, but there was bitter cold during most of the holiday period. In early January the cold has persisted with 1-2 feet of snow. Percents open: Okemo 98%, Stratton 92%, Sugarloaf 73%, Sunday River 77%, Hunter 81%, Tremblant 96%, Mt. Ste. Anne 93%.

All content herein copyright © 1996-2018 Bestsnow.net
All Rights Reserved.
No copies or reproductions may be made in whole or in part without express permission by Tony Crocker.
Prices for commercial users will be determined based upon intended use and distribution.