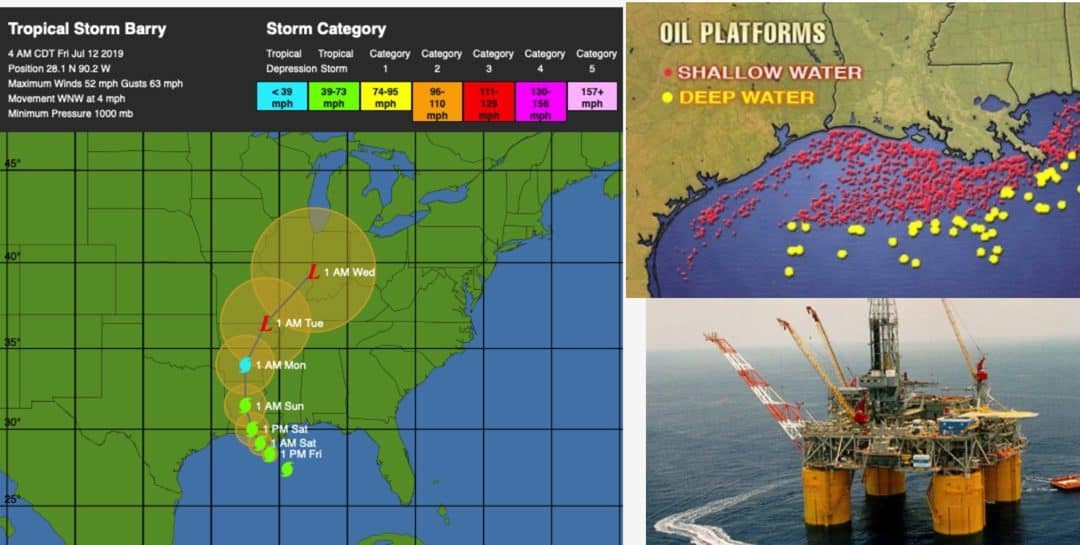 New Orleans and Texas are no stranger to hurricanes. Hurricane Katrina in August, 2005 created one of the worst national disasters in history, while two years ago, the city of Houston witnessed more than 30″ of rain that temporarily put the nation’s refinery capacity out of commission. But how might tropical storm Barry affect commodities and especially the energy markets?

In this report below I discuss the implications to the energy market from tropical storm Barry, and what a weakening El Nino Modoki might portend for this hurricane season.

There remains the potential for some amount of storm surge to work its way up the Mississippi toward New Orleans, although this threat is diminishing as Barry struggles to organize. Still, the Mississippi has experienced record-prolonged flooding this year, and the arrival of an early-season tropical cyclone atop late-season flooding is an unusual and concerning prospect.

The Mississippi River, which is usually at 6 to 8 feet around New Orleans this time of year, it is at 16 feet after a year of record flooding. And 10-15+ more inches of rain are on the way.

So what might be the implications for the energy markets? First of all, with respect to natural gas, prices have been under pressure since the end of winter due to a mild late winter and spring. Only recently have prices rebounded off three year lows, due in part to some hot Midwestern and eastern weather and the psychology of a potential hot summer. However, a tropical storm, if anything can actually hurt demand for natural gas in the South. Unlike the Pre-Katrina years, close to 80% of natural gas production is from shale and not in the Gulf of Mexico. Hence, Barry will have little affect in the market, even though there are some short term shut-downs in the Gulf. Hot weather is driving natural gas prices higher, for the moment.

Hurricanes are simply not as bullish as they once were, unless you have a Hurricane Harvey situation (one in a 50 year event) the floods refineries for days on end. Even during Harvey in 2017, you saw crude oil prices collapse, while gasoline rallied due to refinery issues. While an estimated 53% of Gulf oil production is shut down, without major hurricane force winds, oil rigs in the Gulf can easily withstand just heavy rains and high seas for a couple days. With respect to crude oil, demand curtailment, from slow to return refinery problems, actually can be “bearish” the crude oil market. That is what happened in 2017 with Harvey as crude oil prices collapsed for several days, while gasoline prices soared due to refinery issues.

The map above shows the location of the majority of US oil rigs. It is much more important to the crude oil market what OPEC ends up doing with respect to their projected production cuts, as well as the global demand part of the equation and whether American shale production continues booming head.

There can be knee-jerk reactions in the energy markets from tropical storms and hurricanes, but often it is “buy the rumor”, sell the fact. Nevertheless, instances like during Hurricane Harvey can create major price spikes in gasoline because it hit during the heart of the summer vacation driving season and put many refineries in Texas out of commission for days. For an interesting article about Harvey and the surge in gas prices, click here

El Nino is weakening and that could enhance this season’s hurricane season because it reduces shear in the Gulf coast and Atlantic. Ocean temperatures in the eastern Equatorial Pacific, (near Peru) are cooler than normal, whereas in the western Pacific it is still warmer than normal. This is a bit unusual as most El Nino’s see warmer than normal sea surface temperatures closer to the West coast of South America. These warmer waters typically cause shear and reduce hurricane activity. The fact that hurricane Florence and David were so intense last year, was a sign that El Nino was weak last year and slow to develop.

I took a look at 4 particular El Nino Modoki events since 1950 that seemed somewhat similar to today–An El Nino Mokadi that is slowly weakening and may even become a La Nina or El Nino neutral event by fall or winter.

–1980 was the year of an infamous spring and summer drought across much of the country, following the eruption of Mt. Helen. Quite a contrast to this year’s historical wet spring and severe weather season. Nevertheless, here too there were 11 names storms and two major hurricanes.

–1992 was a weak hurricane season with only 6 named storms. However, hurricane Andrew was a category 5 that wiped out south Florida and then the Gulf of Mexico (it only takes one). However, ocean temperatures then were a lot cooler than they are today.

–Finally, 2005 had a record 28 named storms and 7 where major hurricanes with many of them hitting the United States.

(map above) Plenty of warm water temperatures presently in the Gulf of Mexico and the Eastern Atlantic. The cool (blue) temperatures off the coast of West Africa could retard tropical waves coming off the West coast of Africa again this summer. This existed last year and was responsible for an inactive first half of the season.

BOTTOM LINE–With El Nino weakening and warm Gulf and Atlantic ocean currents , most of the analog years listed above , suggest a normal to active hurricane season with the potential for at least 3 major hurricanes later this summer and fall. Three of the 4 analog years listed above had at least one modest to major hurricane hitting the United States with the greatest risk being Florida and/or the Gulf.