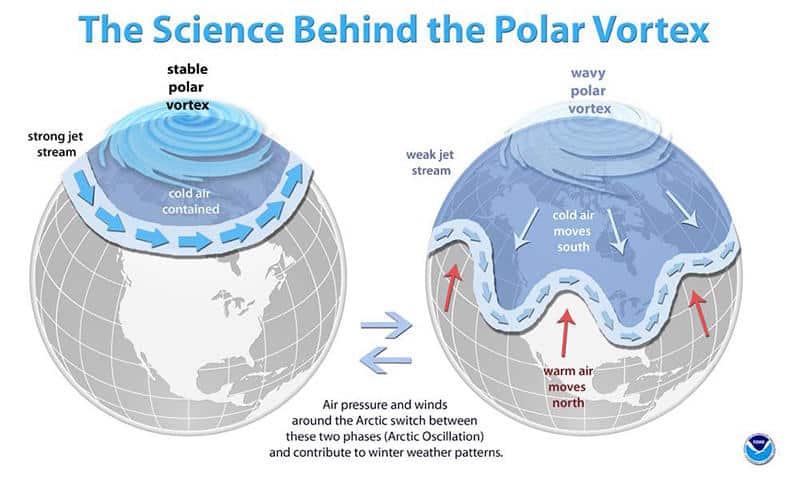 I have received numerous questions around the world from natural gas producers, hedgers, traders and even some pipeline operators, what my official long range weather forecast is for the northern hemisphere winter.

To see a preview of my winter outlook in the next week, please register for free blogs and reports here. Right now, I feel at least the first half of winter will be warmer than normal with a chance that the late winter or spring will be cold. Natural gas prices should come under pressure this winter.

In the meantime, as of this writing (November 12th), some energy traders are baffled as to why natural gas prices have sold off 10% this week, following a stellar early November bull move on extreme US cold. However, prices should be rallying back again soon due to the on going record cold and some suggests of a return to cold late November weather.

The graphic of the Polar Vortex at the top of this page helped create a major short covering rally in natural gas prices a week ago. However, record low sea ice and other climatic factors will be easing the US cold deeper into November and one reason why prices sold off earlier this week. Nevertheless, weather maps still suggest some cold late November weather in the eastern US and the recent cold may inspire a friendly EIA number this week. Hence, without major prolonged warm weather, nat gas prices will remain volatile.

Arctic sea ice is one of the most dramatic indicators of the changing climate. Ice cover on the Arctic Ocean is in some months about half what it was decades ago, and its thickness has shrunk, by some estimates 40 percent.

Natural gas prices will remain volatile. December weather will of course be key.

The record cold (above) earlier this week helped to rally wheat prices (some crop damage in the Plains) and was anticipated a week ago in the natural gas market. -Jim

While there will be some more cold in the eastern US weather and a few bouts of snow could still develop over the next week or two, one can see that natural gas stocks are still well above the 5 year average (chart, below). Hence, for us to sustain a major rally in natural gas prices, we need to see consistent major cold, the polar vortex return by December and for there to be a panic by producers and hedgers.

Heating oil vs gasoline and crude prices will also be influenced by winter weather.

While El Nino does, low solar activity and many other factors will influence winter weather and natural gas and heating oil prices. Sometimes, a warming Arctic can displace the polar vortex and send extreme cold south either in the US, Europe or Asia. This is what is happening early this week.

However, SEA ICE is still near record low levels over the Arctic and hence, a consistent major cold early winter is unlikely. Here is an interesting article about Arctic Sea Ice and what scientists are focusing in on.

So what is my winter forecast and will the polar vortex return? I will be offering trading ideas and long range forecasts soon with a paid monthly newsletter subscription and occasional flash weekly updates. Stay tuned for details.–Jim Roemer