THE FOLLOWING IS AN ARTICLE FROM LAST MONTHS WEATHERWEALTH MEMBERSHIP 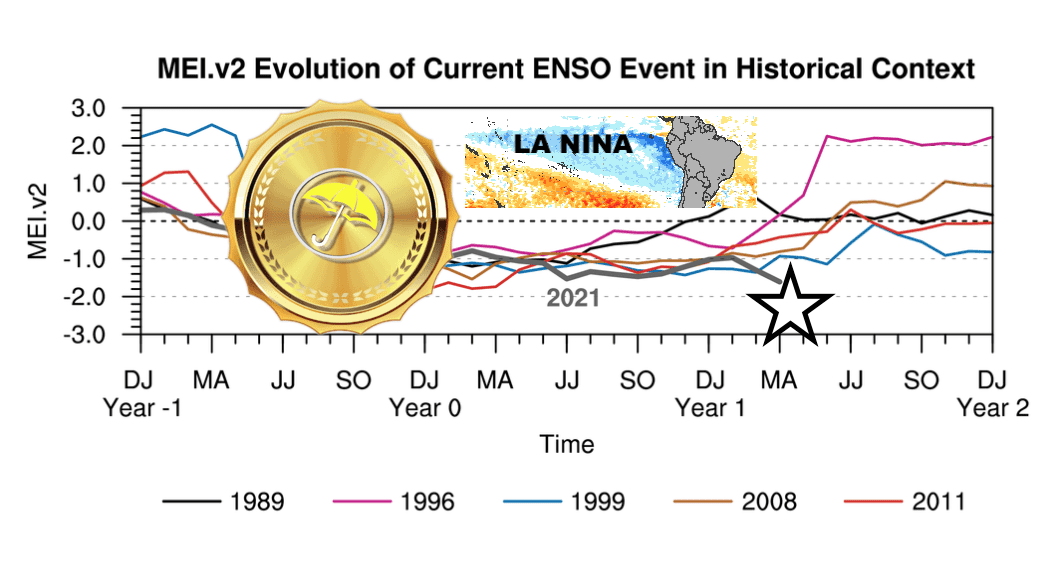 – Colombia becoming too wet for coffee

– Best Weather Spider: Wheat has been my number one trade

Contrary to others suggesting La Niña will fade, I have preached that this would not be the case. The image above shows how the present La Niña is actually stronger than the La Niña events of 1989, 1999, 2008, and 2011. This is adding to global food inflation with the historical drought out west continuing, the recent South American grain drought, and now weather problems developing in India and in parts of Europe.

Currently, this La Niña is becoming more east based at Nino12.

So, how might an investor take advantage of this in the months ahead? Most recently, of course, it has been wheat that has yielded huge profits to those who heeded my advice. What may be next? Stay tuned for my studies in the weeks ahead.

The western drought is one of the worst in 1,000 years and threatens water supplies for irrigation and may also mean that utilities in the West will use more power generated by natural gas and less hydropower.

Indian just cut off wheat exports. This unusual occurrence has resulted in another leg up in wheat prices. In addition, here is a list of the global weather issues that continue to result in production problems and tighter global stocks for wheat:

A couple of weeks ago, I mentioned being short December corn and long July wheat. The main reason I was not as bullish on corn, was, in part, that I was so bullish on wheat, this spread would offer risk protection if something was to change in Russia’s war on Ukraine. Also, excellent drought easing rains in the northwest corn belt and spring wheat belt and warmer temperatures are generally bearish corn this time of the year.

However, you can see below how corn planting progress continues to lag and a very wet weather pattern into June could continue to support corn prices again. Planting delays continue in many areas of the Midwest, as well as in the Dakotas.

You can see that in some instances (not all) wet spring weather for corn planting ultimately results in lower U.S. corn yields, but this is not always the case. If we get into a 1993 or 2008 major spring flooding situation, corn prices could rally another 50 cents to $1.00 through June. However, it will take a hot-and-dry summer to really see a major additional bull market in corn. One other point that I sort of overlooked is the potential for a sharp reduction in Ukraine’s corn acreage due to the war.

A strong dollar usually hits markets like corn, cotton, wheat, crude oil and especially metals. However, food inflation fears and weather problems continue to help “ag” commodities to soar. Gold prices have little chance to go back above $2000 at any time soon.

Rising interest rates and concerns in the stock market are good for the dollar but bad for crypto… and bad for precious metal investors seeking that traditional, and dependable, inflation hedge.

After catching “most” of the major 2021 bull move in JO (the coffee ETF) and in various option strategies, I have been mostly in the bearish camp (on rallies) for the last four and a half months. This was because of a recovery in the Brazil crop from drought easing rains, an overbought market, the stronger dollar, and too many long speculators in the futures market.

The one weather-related concern I have right now is with the Colombian coffee crop in which too much rain could continue to lower their production. The last time this happened was during the second and third years of La Niña from 2011-to 2012. There was a spring rally in prices, even in the midst of no frost scares or drought in northern Brazil.

I will be discussing various global climatic factors such as the western drought, La Niña, and much more in the weeks and months ahead. In the meantime, one year that had similar weather problems to Colombia coffee, a drought in parts of the southern Plains wheat and cotton areas, and slow corn belt planting weather was the La Niña of 2011. While not written in stone here is what happened in June 2011

2011: Will this La Niña trend continue and bring summer heat to the Midwest grain belt? Stay tuned for other studies.

La Nina, etc. continues to bring decent weather to the west African cocoa crop. That trend should continue unless the Indian Dipole goes shortly negative or the oceans cool in the Gulf of Guinea before June.

The Indian export bans on wheat are spilling over into cotton. There are worries about record Indian heat possibly hurting this year’s cotton crop but it is too early to worry about that just yet.

We have already had a huge rally in the all grain ETF (TAGS), wheat (WEAT), corn (CORN and of course cotton (BAL). The charts and weather remain bullish most of these markets still, but I hate recommending buying rallies, so would wait. Really, the only one I have recommendations in lately was in WHEAT, though I also mentioned cotton a few weeks ago.

UNG may have upside potential this summer and is now slightly above my buy recommendation two weeks ago. I think I would lquidate this position for now as U.S. heat eases later this month.

Again, athough not weather-related, I have been bearish gold for sometime and bullish GLL (the inverse gold ETF), which is now up 15%. Again, some of you have asked me about gold, despite the fact that I don’t regularly comment on the yellow metal.

The number one weather-related trade of late was long July wheat vs. short December corn. While corn has soared again, wheat has out performed corn by more than $1.00 since my recommendation on global droughts. While the weather is still bullish, I advised late Friday and/or today to book such massive profits in wheat and the ETF (WEAT). It is still possible wheat has upside potential… but… What a rally!!! I lowered the Spider from extremely bullish +4, 1-2 weeks ago to a +2 because we already had the rally I expected.

Given the potential switch from corn to soybean acres and further planting issues with cooler late May weather again and above normal corn belt rains, a trader may look to buy 2 December corn contracts and sell 1 November soybean contract. I will explain this by Thursday in a video.

A trader may also look to sell a way out of the money November soybean call option, for example, the November $17 call option is trading at 42 cents ($2,000 a contract). A very conservative trade unless we have a summer drought or incessant June rains that would hurt the crop, but I think soybeans may be over bought soon.

The weather turns cooler deeper into May or early June, so on this rally going to recommend exiting any long natural gas futures, options or the ETF (UNG) for now (too much going on with questions about Europe restrictions of nat gas, etc.)

I remain bearish on cocoa due to the weather.

I am not as bearish in coffee based on the flooding in Colombia and a potentially oversold situation and some frost talk, though it is bogus. Traders may be short the December $2.80 coffee call option from two months ago with profits. It is possible at some point we could have a rally in coffee. I doubt we will see coffee to $2.80 this year.

Cotton – I remain bullish new crop cotton on the Texas drought, but if you are not in, its a bit late now

• Weather Trade of the month recommendation for either coffee, corn, soybeans, natural gas or one other market

• Detailed information on how global weather may affect commodity prices

• Email Jim Roemer (one question a month) about your market position

• Encompassed crop analysis and special weather maps from around the world

• Grain, Soft and Energy Commodities—Know before the crowd where the weather extremes will be