Another Gulf Hurricane And How The MJO Influences Tropical Development 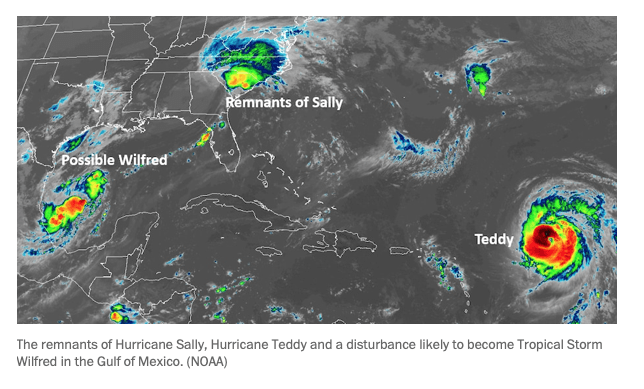 Many weather forecast firms were correct (for a change) predicting an active hurricane season this year. The factors that have gone into predicting with such certainty the most active hurricane season since the infamous 2005 Hurricane Katrina and Rita years are as follows. 1) A developing La Nina that reduces wind shear in the Gulf. This allows storms to deeper stronger than standard weather forecast models can predict. 2) The Madden-Julian Oscillation (MJO) mostly is in a favorable phase for development. C) Oceans are warming due to what I believe is climate change. 4) Africa dust, which a couple of months ago painted the skies across the Gulf and Florida, has dissipated.

The Madden Julian Oscillation (MJO) is a mass of thunderstorms in the tropics, which sometimes rotate around the entire globe every 60-90 days. When these systems are in the Indian Ocean and eastern Pacific they tend to enhance thunderstorm development in the Gulf. They also enhance hurricane development. This was a key with both Hurricane Laura and Sally strengthening more than models predicted. Bestweather had pointed that out to clients.

One can see the MJO was in enhanced stages 1 and 2 recently. Again, these are reasons for the explosive development of both Laura and Sally. Next week, the MJO moves into a suppressed phase (4-6). That normally would mean that the new system in the SW Gulf would not be any stronger than a category 1. Nevertheless, it could still bring flooding impacts to much of Texas again. The last thing people in Texas need is another “hurricane Harvey” type storm.

The bottom line is this. Due to climate change and a developing La Nina, if Gulf coast storms the next few weeks are stronger than a cat 1, this implies that the warmer oceans, brought on by climate change, have at least as important a role in hurricane formation and intensity as these other factors.

Another Hurricane In the Gulf?

While many weather forecast firms update clients about every market from grains to natural gas, few weather people explain “Why.”. For example, storms like Hurricanes Laura and Sally were bearish for the natural gas market, but have supported gasoline prices. Also, what impacts will the China flooding have on grain prices? These are just a few of the insights that I pass along to clients of my Weatherwealth bi-weekly newsletter. I show how to trade some of this stuff and how I predict longer range weather trends.

The map above shows the potential for another Gulf storm next week. Interestingly, however, the majority of the forecast models have been too weak predicting Hurricane Laura and Sally. Most other meteorologists were likely not aware of the impacts it would have on commodities such as cotton, natural gas, the gasoline complex, etc. However, as mentioned above, the MJO might prevent this next system from being as strong as it normally would be. Jim Roemer

Learn how to trade commodities on the weather and not follow the crowd, Click above for your FREE TRIAL