The Arctic Oscillation Index. What Is It And How Does It Shape Our Fall/Winter Weather? 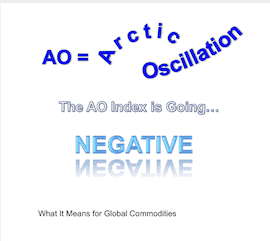 The NAO/AO can be thought of as an index of high latitude blocking. This term defines ridges of high pressure in the upper latitudes of the northern hemisphere that block the normal atmospheric circulation of wind. Such blocking can occur from the far Northeast Pacific through Canada, the Arctic, Greenland, and the North Atlantic. It can result in totally abnormal circulations in the atmosphere.

The upcoming current negative phase of the AO index promises to bring a colder later fall and early winter to much of the central or eastern United States and parts of Europe. This could get the ski season off to a better start in New England and Europe and potentially support certain energy spreads this winter “if” we see extreme winter cold. While the AO index is turning negative, it remains to be seen just how much additional global warming might occur due to the historic western fires and the melting polar ice cap.

Whenever the NAO/AO is high (positive), high latitude blocking is much less frequent, and the jet stream flows quickly from west to east carrying weather systems. It acts as a divide between cold air to the north and warm air to the south. The Eastern US, Europe, and East Asia, which lie in the mid-latitudes, experience long stretches of mild weather. They remain cut off from cold, Arctic air masses. This happened last winter and was responsible for the major collapse in natural gas prices and heating oil spreads.

At times when the NAO/AO is low (negative), high latitude blocking is more frequent. This will be happening this fall and perhaps this winter. The flow of air in the atmosphere is impeded or becomes blocked. The jet stream is diverted from its normal trajectory and meanders north and south around the high latitude blocking. Mixing of air masses occurs with warm air flowing north into the Arctic and cold air flowing south into the mid-latitudes and cause more severe winter weather for those regions. This is because Arctic air masses repeatedly drive southward. Furthermore, the mixing of warm and cold air masses fuel storms. With more abundant cold air, the precipitation from these storms often falls as snow.

I began alerting my WeatherWealth newsletter subscribers last week, that I thought we would walk in this week with talk of much colder late fall weather for US natural gas areas because I had expected the AO index to go negative. I believe that part of the warming over the Arctic and the “wavy polar vortex” (map above to the right) is because of the intense California fires and also due to La Niña.

The AO Index can also affect global commodity regions, thousands of miles away

The AO index does not only influence northern Hemisphere weather for the energy markets but also several key crop regions for agricultural commodities.

Climate Predict is our proprietary forecast program. The screenshot shown below depicts an example of how we assess global weather trends for investors and farmers all around the world. Despite the fact that potential problems may exist later for coffee and soybeans in Brazil, due to drier weather:

Monday’s sell off coffee and soybeans was due to wetter forecasts for Brazil.

Will the grain market resume its uptrend longer term? What’s our feeling about natural gas and other markets? For that, we recommend you sign up for a complimentary trial to our WeatherWealth newsletter.