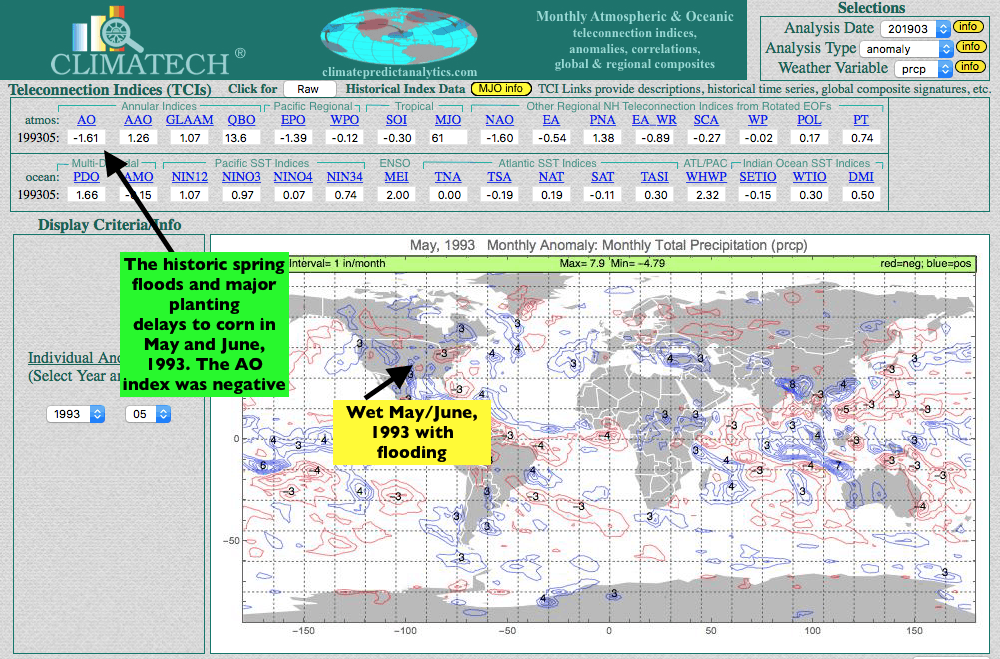 The near historical Midwest flooding and snow melt has offered a glimmer of hope to farmers and grain traders, that perhaps the corn market would bottom and head higher this spring. However, great South American weather, combined with large corn and soybean carry over stocks and poor demand has continued to pressure most grain prices. It is my feeling that in the next few weeks, a potential weather market in grains will create short covering as planting delays for corn and disease issues of winter wheat arise as we head deeper into May.

The three or four commodities that have been breaking out to the upside recently have been crude oil, cotton and sugar. Some of this is weather related but most of the reasons for higher prices in these commodities has been due to the outside markets, ideas of OPEC cuts and some potential El Nino driven weather issues, later.

The Arctic Oscillation index, (AO) is one of the most well known teleconnections used by meteorologist to make weather forecast predictions for the northern latitudes; especially during the winter when it comes to the natural gas and heating oil market. When the index is negative, there is often a cold U.S. and/or European winter. The AO index can also have an influence on Midwest spring and summer weather. While a weak El Nino event could still portend some wet weather issues for Midwest grains this spring, it is greatly benefitting the wheat crop from Nebraska to Kansas, Oklahoma and Texas, which previously suffered drought last year.

With respect to Midwest corn and soybean planting in May and June, it may take the AO index to go negative to cause major concerns for crop planting the next month or two. Something we will watch for clients and I think could happen. The upper right image of a negative AO index is most conducive to a cold, wet Midwest spring. This is especially true when we have a weak El Nino at the same time–so we will watch this.

The positive AO index (above) has helped natural gas prices fall and also brings a warmer solution for Midwest corn planting offsetting some of the recent wet weather; at least, for now. Notice below, how in 1993, the tail end of El Nino combined with a -AO index resulted in the spring flooding that helped the corn and soybean market soar in May and June. Things are a bit different that this, today. If the AO index begins to become more negative, then much greater concerns could mount about Midwest planting weather in the coming weeks. There will be various trading opportunities in corn, wheat and soybean based on acreage perceptions and wet weather concerns in the coming weeks. Jim Roemer