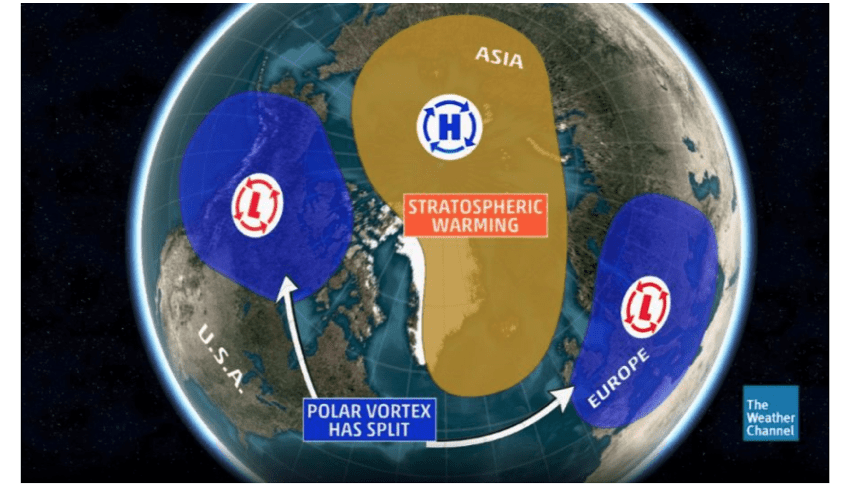 The image above shows a typical stratospheric warming event. This has not happened for years in part due to the melting Arctic. When this happens, cold weather can spark a rally in certain sectors of the energy complex.

The blue cooling you see on the image above is about 75,000 feet up in the stratosphere. This often PREVENTS the Polar Vortex to move south and is often a bearish aspect to the heating oil market, with certain crack spreads and natural gas.

What is a Sudden Stratospheric Warming?

In recent years some extreme cold, winter snow events have all been connected to the surface effects of sudden stratospheric warmings, such as those winters in 2009-10, 2013, and ‘the beast from the east’ in 2018. You may be asking why it is called warming than if it leads to cold conditions?

The term sudden stratospheric warming refers to what is observed in the stratosphere:- rapid warming (up to about 50 ­°C in just a couple of days), between 10 km and 50 km above the earth’s surface. This is so high up that we don’t feel the ‘warming’ ourselves. However, usually, a few weeks later, we can start to see knock-on effects on the jet stream, which in turn affects our weather lower down (in the troposphere).

When this happens way up in the stratosphere, the Polar Vortex can move south resulting in a severe US winter and be good news for ski resorts, winter retailers, and the natural gas market, but not so, so far this year. The opposite is occurring. Again, cooling over the Arctic, so the Polar Vortex remains there and the US–mostly warm.

Our clients have a variety of option spreads in natural gas and other markets based on our winter weather forecast. Try out our less expensive monthly service for just $13

How does sudden stratospheric warming occur?

Every year in winter, strong westerly winds circle around the pole high up in the stratosphere. This is called the stratospheric polar vortex and it circulates around cold air high over the Arctic. I believe, because of the melting Arctic, this has increased the wind speed around the polar vortex and has helped to keep the vortex mostly to the north of the U.S. Last winter was a key example with record warm weather and a collapse in heating oil and natural gas prices. Without a stratospheric warming event, the weather should remain bearish nat gas and heating oil spreads.

Notice the image above in December 2018 and the warming (red) at 75,000 feet over the North Pole. This helped to push the Polar Vortex south and result in a cold period in late December and a rally in energy prices. Again, we DO NOT have this situation, currently.

For some updated information about the melting Arctic, see the video, below