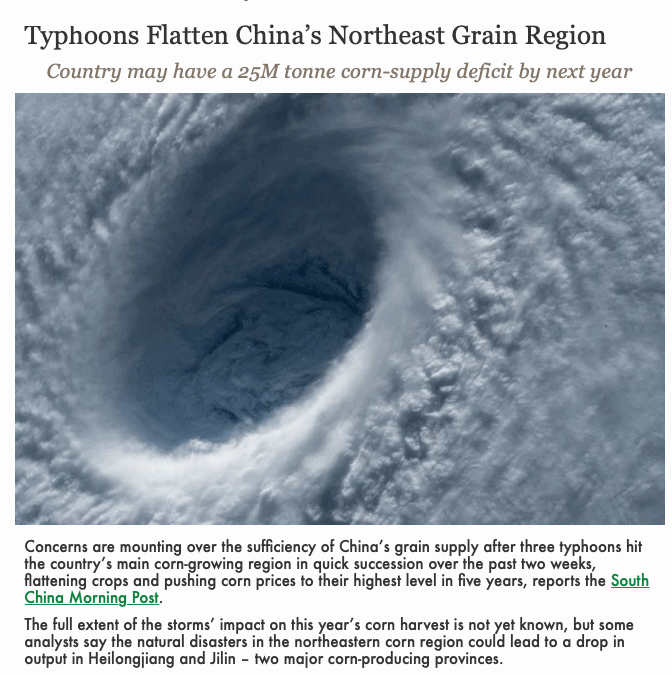 Hurricane Season Active Not Only in Atlantic But In China

The Atlantic is the most active with tropical systems since the infamous 2005, which brought Katrina and Rita. Three typhoons hit China in the last few weeks: that is unprecedented in modern history. Historical record heat and California fires continue to rage. These are all signs that climate change is real.

Damage to corn crops in Northeast China from recent typhoons is also raising anticipation of additional demand for corn imports.

The typhoons caused damage to corn crops in Heilongjiang and Jilin provinces. “Corn crops were battered here and there hit by the wind as their plants were higher and heavier,” the company said.

Liaoning, Jilin, and Heilongjiang production is of great significance to grain security in China. These crops account for three-quarters of the year’s grain production, the company said.

This image above was from early September.

The Influence of Weather And China’s Grain Shortage

The grain market has exploded the last few weeks as shown by the all-grain commodity ETF (JJG). The reasons have been both weather and China-related. First, there was the historical Iowa windstorm on August 10th called a derecho. This was followed by the mini-flash drought in Iowa. Capping that is incredible China demand, in part brought on by the recent three typhoons that hit China. (See my video below.)

China’s agriculture ministry raised its forecasts for corn imports for both the 2019/20 and 2020/21 crop years, on large arrivals from the United States. This was according to a report published on its website on Saturday.

It also lowered its outlook for corn output in the new crop year that starts in October and ends in September, 2021.

China has ramped up U.S. corn imports recently amid tightening domestic supplies, as Beijing strives to fulfil the Phase 1 trade deal the two countries signed in January this year.

Reuters reported that a combination of a “devastating” swine disease and shutdown-related supply chain disruptions are contributing to a “looming corn shortage.” Grain market disruptions in China are expected to boost ag exports for U.S. farmers in the coming months.

Corn shortages in China are reportedly causing some end-users to switch to other grains and oilseeds, including soybeans, for animal feed use. It should be noted that soybeans (of which 80% are used for meal) constitute the vast majority of U.S. animal feed production. Vegetable oil, which is also a major use for soybeans, is also in very high demand globally. That is another long-term support for the soybean market.

China has also been purchasing “record volumes” of U.S. agricultural products, including corn, pork, and poultry this year. Increased poultry demand from the world’s largest ag importer should further boost soybean demand. Poultry feed is heavily based on soybean meal.

According to reporting from Reuters, high food inflation rates have prompted Chinese President Xi Jinping to make a high-profile plea for an end to food waste.

Soaring corn prices will have knock-on effects in China’s pig, dairy, and poultry sectors. The current price upset is the latest in a series of agricultural setbacks that include recurring outbreaks of African swine fever, COVID-19-driven stoppages for international suppliers, and warnings of a growing food supply gap.

China faces its first real corn shortfall in years for the upcoming 2020-2021 season as prices continue to rise. Analysts and traders report that China could see a deficit of up to 30 million tonnes, around 10 percent of its total crop. The recent typhoons have been unprecedented and only adding to the demand side of the equation. This is good news for US farmers. With La Nina forming, there is the chance for weather problems in South American this winter (South American summer). This could lead potentially to higher longer-term grain prices.

What about US harvest weather and how can you take advantage of La Nina if you are a farmer or trader? We encourage you to get the best weather information with a free trial at the link, below.