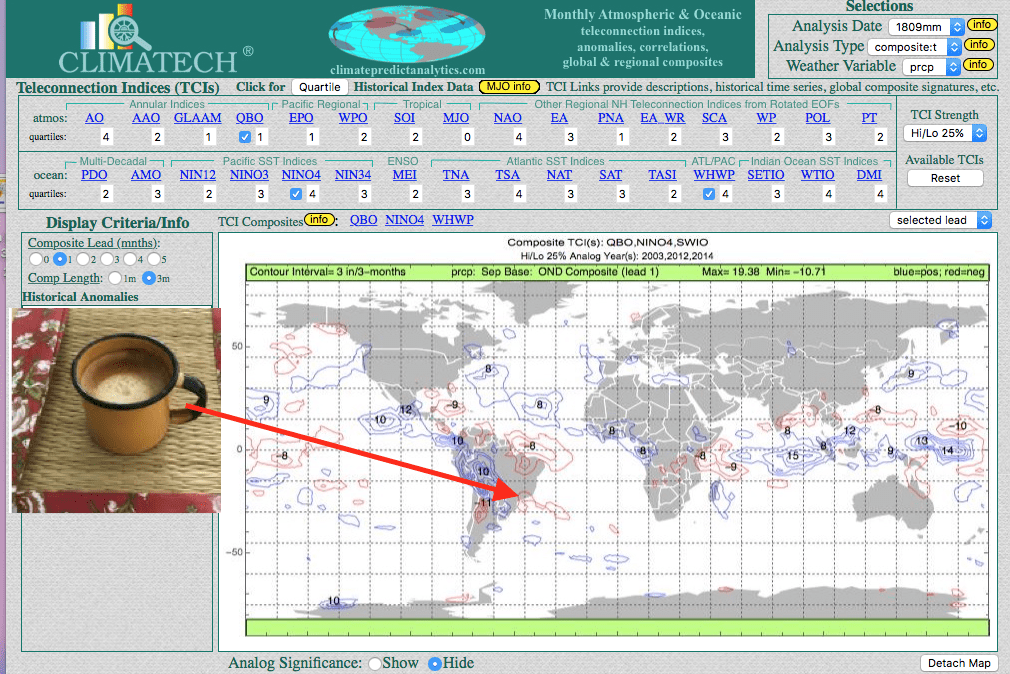 Until this week, the coffee market had defied the big, record short position in the market as it continues to muster its way through bear market territory. The International Coffee and Cocoa Organization (ICCO) recently increased the 2018-2019 Brazil coffee crop again, while the Brazil Real has stayed under pressure. We showed some charts regarding the relationship of coffee prices to the Brazil Real in the September 20th issue of Climatelligence Report (HERE) 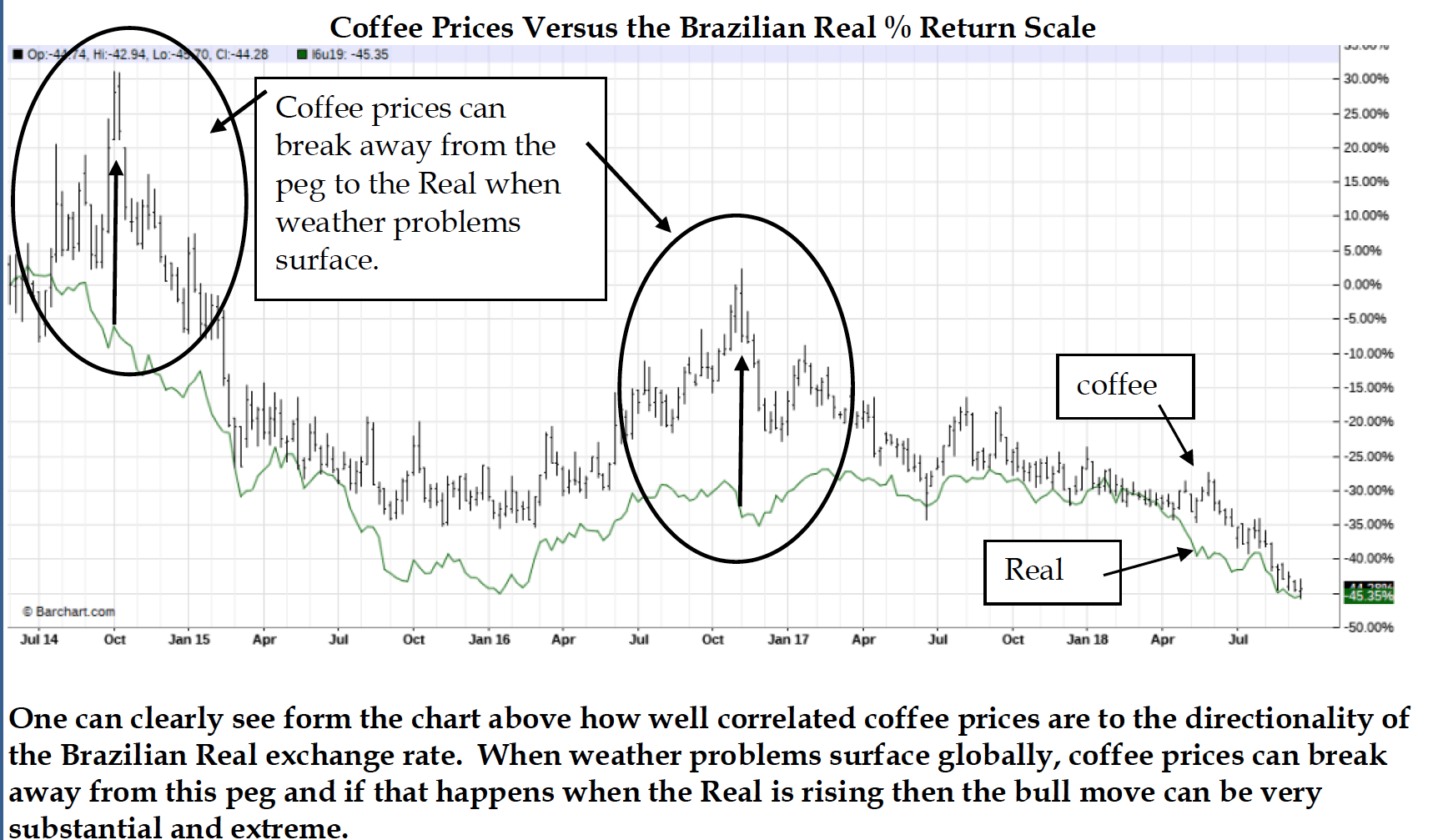 Without going into too much detail, the biggest Oct-December drought to Brazil coffee in the last 30 years occurred in 1985. Contrary to popular belief, the 1985 coffee drought occurred during weak La Nina conditions. Dry Brazil weather historically occurs during El Nino events. However, NOT all El Nino’s are associated with lower global coffee yields and higher prices. This scenario occurs about 50% of the time. With deforestation, a growing problem in Brazil, El Nino’s can add to the woes of coffee crops, especially further north in the Robusta coffee regions. Robusta coffee is the “lower quality” instant type coffee, you may buy in a “jar” at your local grocery store. It is grown, not only in Brazil, but also in Indonesia and Vietnam.

Anyway, until recently, the map below illustrates that the lack of Brazil related crop stress at this time, has prevented any bull market in coffee. Nevertheless, three analog years that have similar ocean temperatures around Brazil are listed below (1968, 1977, 2003) tended to have drier than normal weather heading into October or November-December, which is the important “bloom stage” for coffee. While we do not have a coffee chart for 1968 and the world has certainly changed a lot since then, the report below illustrates how coffee prices bottomed sometime between October-December in both 1977 and 2003. Nevertheless, markets look ahead and our unique, long-range weather forecast model CLIMATECH, shows at the top of the page, the potential for dry weather (red) over “portions” of Brazil’s coffee belt during the important “bloom” period over the next month or two. 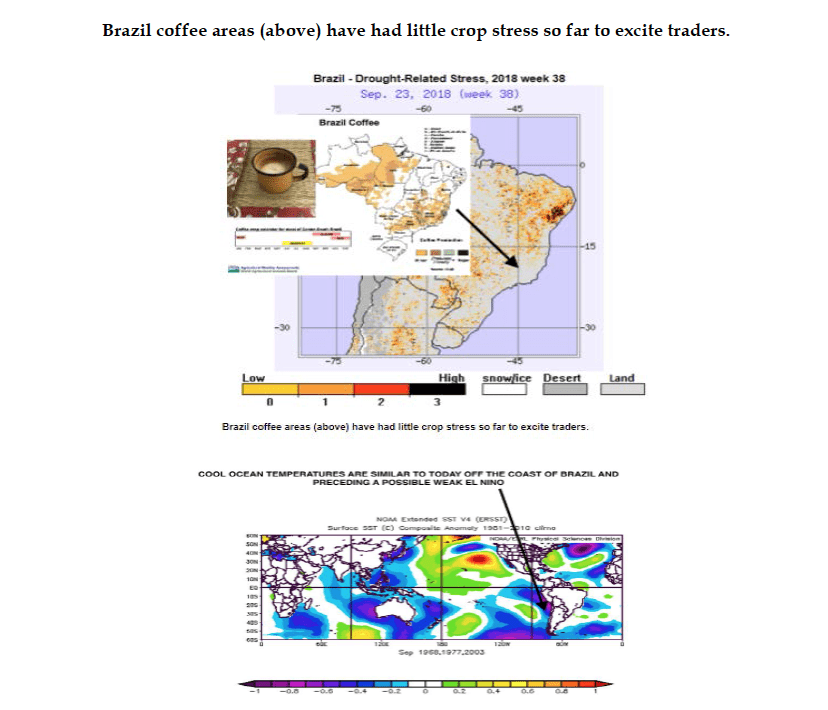 (Map above)–The lack of crop stress in Brazil (dryness red/brown is away from the coffee areas). However, this could change over the next month or two

SUBSCRIBE HERE  TO OUR WEEKLY COMMODITY NEWSLETTER AND GET THE ABSOLUTE BEST WEATHER FORECASTS AND MARKET IDEAS FOR GLOBAL COMMODITIES. GET 25% OF THE NORMAL $1200 YEAR COST FOR 42 ISSUES, FOR A LIMITED TIME. WILL THE COFFEE MARKET EXPLODE ON GLOBAL WEATHER PROBLEMS IN THE MONTHS AND WILL SUGAR AND OTHER COMMODITIES BOTTOM? FIND OUT BY SUBSCRIBING 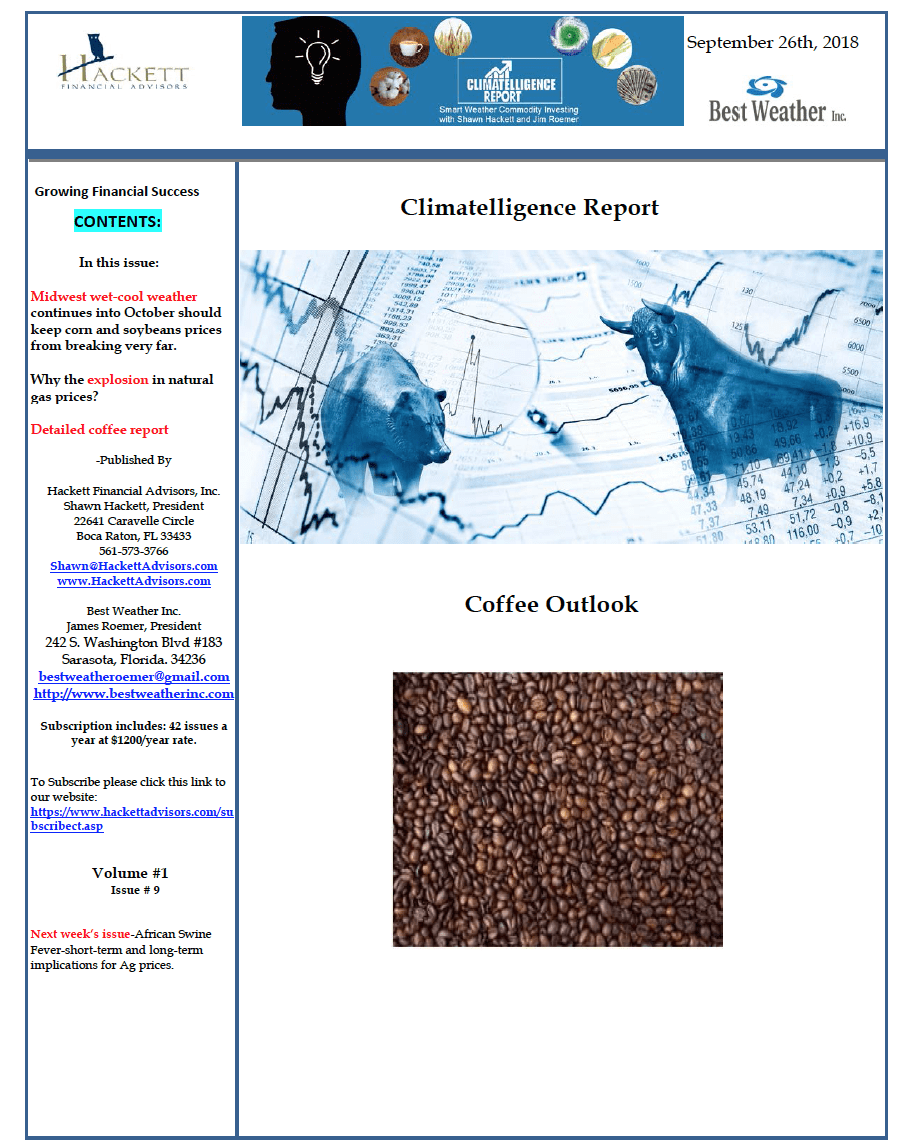