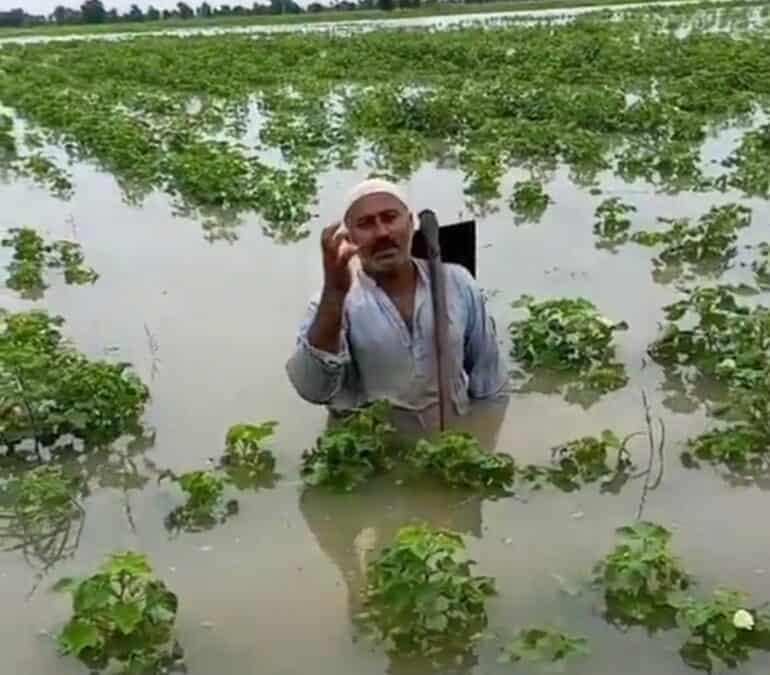 A “monsoon on steroids.” That’s how the UN Secretary-General described the weather bringing the climate-related floods to Pakistan and its crops. Most importantly for international markets, these include cotton and possibly wheat. Since June, over 1,100 people have died and one-seventh of the country’s population has been impacted by floods. The storms damaged around a million houses. Monsoon rains are over 400 per cent heavier than normal in some key agricultural provinces. The most Indus River flood damage is occurring in Sindh province, Pakistan’s second-largest producer of wheat and cotton.

Kharif (Monsoon) Crops Had a Hard Start This Year

Pakistan has two main growing seasons, winter and monsoon, also called kharif. Kharif crops include cotton, rice, sugarcane, and corn, as well as staples like dates, chilis, and onions. The main concern for planting this year’s kharif crops was drought, at first, as 21.6 per cent less rainfall than normal fell nationwide from January to April. High temperatures also plagued Sindh, Balochistan, south Khyber Pakhtunkhwa, and southern Punjab, which, in the main, are the areas now flooded.

Even before the catastrophic floods this monsoon season, drought impacted Sindh province’s agriculture. Sindh Agriculture Extension Department data showed 2022’s wheat production to be 17 per cent below the government’s targeted amount. The government target for cotton planting was 19 per cent higher than Sindh’s actual acreage.

Planning Minister Ahsan Iqbal told Reuters that almost half the country’s cotton crop had been destroyed. While Punjab provides the majority of Pakistan’s cotton crop, the monsoon destroyed almost all of Sindh’s crop.

By August 23rd, the outlook for cotton production in Sindh province already looked grim. “So far there is 45 per cent loss in cotton, 85 per cent loss in dates, and 31 per cent loss in rice in Sindh due to the ongoing monsoon. The standing sugarcane crop has also suffered damage up to 7 per cent due to floods, despite it being a high water-consuming crop, [which shows] the intensity of the disaster we are facing,” said Ali Nawaz Channar, technical director at Sindh’s Agriculture Extension service.

Within days, others estimated that continuing rains increased the losses. “The crop of cotton is almost 90-100 per cent damaged,” said the chair of the Sindh chapter of the Pakistan Businesses Forum. The Chief Minister of Sindh said 90 per cent of the province’s farmers had damaged or completely destroyed crops.

Wheat: Even After Rain Stops, Monsoon’s Damage Will Be Ongoing

“Now there is so much water that no future cultivation can be made. It would be impossible to grow wheat and sugarcane in Oct/Nov,” the Sindh Chamber of Agriculture President told a national newspaper. Predictions are that monsoon waters are unlikely to recede to allow timely wheat planting in October and November in many places. There also will be the need to repair irrigation systems and the more than 20 dams already breached or destroyed. Sindh province is home to the world’s largest barrage-based irrigation system.

Any decline in wheat production will only add to Pakistan’s humanitarian needs. While cotton fuels exports, it is wheat that fuels the country. Wheat makes up 70 per cent of Pakistan’s grain production and it is the country’s main food source. Even before the ravages of the COVID epidemic and the current flooding, approximately 40 per cent of Pakistanis were food insecure.

How Pakistan Got Here and What Comes Next

Many Pakistani commentators online blame the extent of the current crisis on the failure of the country’s government to make strategic infrastructure upgrades after 2010’s devastating flooding.

Pakistan is the 8th most affected country on the Long-Term Climate Risk Index. Increased temperatures and melting glaciers in Pakistan’s northern mountain region are the causes of the monsoon’s heavy rainfall, according to many analysts. The country has over 7,000 glaciers, more than anywhere on the planet outside the Poles. Neither increased global temperatures nor the melting glaciers are likely to end soon.

It’s not like Pakistan doesn’t have enough long-term woes. The IMF this week provided a new tranche to help the country stave off default and to address its ongoing economic crisis. And the heavy monsoon may also be seeding another problem for the country’s agriculture. FAO posits that the unexpected volume of rain may lead to increased locust breeding along both sides of the Indo-Pakistan border.