A very cold U.S. winter, but that does not change the longer term prospects of Climate Change 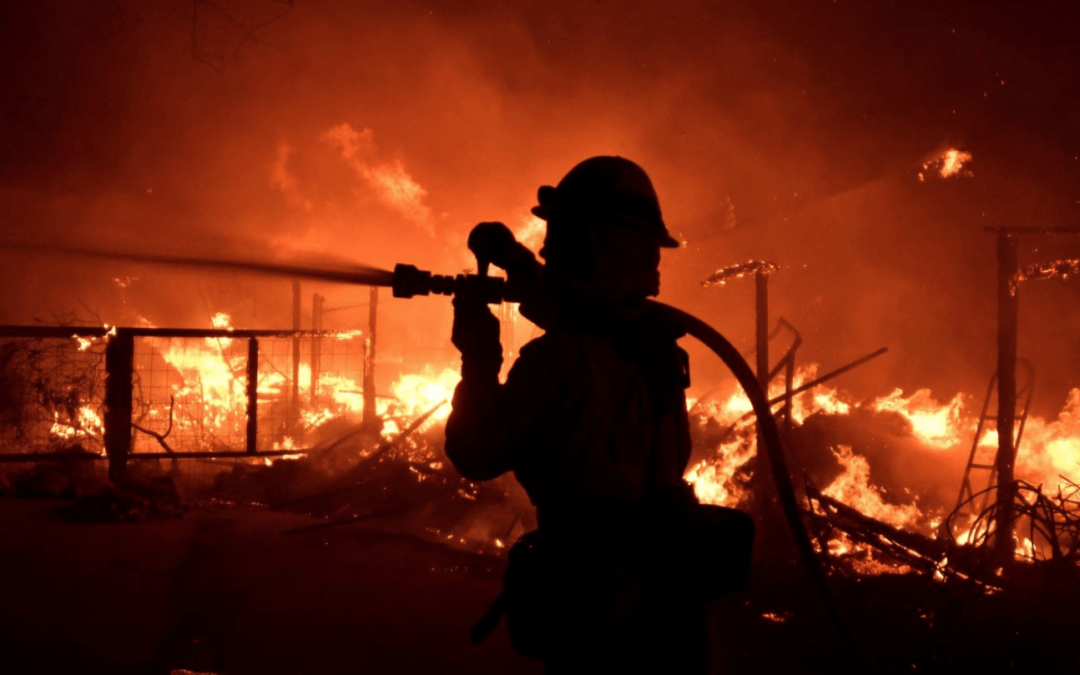 A cold winter is on tap for the United States, but that does not mitigate the long-term effects of a warming planet, rising sea levels, and the destruction of reefs around the globe. While China and other countries are taking measures to adapt to global warming, the Trump Administration better get its act together, especially given the recent government report about Climate Change (see below).

In the meantime to find out how you can trade stocks and commodities on what will be one of the coldest winters in years in the United States, please click here

The federal government on Friday released a long-awaited report with an unmistakable message: The impacts of climate change, from deadly wildfires to increasingly debilitating hurricanes and heat waves, are already battering the United States, and the danger of more such catastrophes is worsening.

The report’s authors, who represent numerous federal agencies, say they are more certain than ever that climate change poses a severe threat to Americans’ health and pocketbooks, as well as to the country’s infrastructure and natural resources. And while it avoids policy recommendations, the report’s sense of urgency and alarm stand in stark contrast to the lack of any apparent plan from President Trump to tackle the problems, which, according to the government he runs, are increasingly dire.

The congressionally mandated document — the first of its kind issued during the Trump administration — details how climate-fueled disasters and other types of worrying changes are becoming more commonplace throughout the country and how much worse they could become in the absence of efforts to combat global warming.

Already, western mountain ranges are retaining much less snow throughout the year, threatening water supplies below them. Coral reefs in the Caribbean, Hawaii, Florida and the United States’ Pacific territories are experiencing severe bleaching events. Wildfires are devouring ever-larger areas during longer fire seasons. And the country’s sole Arctic state, Alaska, is seeing a staggering rate of warming that has upended its ecosystems, from once ice-clogged coastlines to increasingly thawing permafrost tundras.

The National Climate Assessment’s publication marks the government’s fourth comprehensive look at climate-change impacts on the United States since 2000. The last came in 2014. Produced by 13 federal departments and agencies and overseen by the U.S. Global Change Research Program, the report stretches well over 1,000 pages and draws more definitive, and in some cases more startling, conclusions than earlier versions.

The authors argue that global warming “is transforming where and how we live and presents growing challenges to human health and quality of life, the economy, and the natural systems that support us.” And they conclude that humans must act aggressively to adapt to current impacts and mitigate future catastrophes “to avoid substantial damages to the U.S. economy, environment, and human health and well-being over the coming decades.”

“The impacts we’ve seen the last 15 years have continued to get stronger, and that will only continue,” said Gary Yohe, a professor of economics and environmental studies at Wesleyan University who served on a National Academy of Sciences panel that reviewed the report. “We have wasted 15 years of response time. If we waste another five years of response time, the story gets worse. The longer you wait, the faster you have to respond and the more expensive it will be.”

That urgency is at odds with the stance of the Trump administration, which has rolled back several Obama-era environmental regulations and incentivized the production of fossil fuels. Trump also has said he plans to withdraw the nation from the Paris climate accord and questioned the science of climate change just last month, saying on CBS’s “60 Minutes” that “I don’t know that it’s man-made” and that the warming trend “could very well go back.”

Furthermore, as the Northeast faced a cold spell this week, Trump tweeted, “Whatever happened to Global Warming?” This shows a misunderstanding that climate scientists have repeatedly tried to correct — a confusion between daily weather fluctuations and long-term climate trends.

The White House did not immediately respond to a request for comment on Friday’s report. However, the administration last year downplayed a separate government report calling human activity the dominant driver of global warming, saying in a statement that “the climate has changed and is always changing.”

Given that history, some of the scores of scientists and federal officials who spent months working on the detailed document were frustrated, but not surprised, that the administration chose to release it on the day after Thanksgiving — typically one of the slowest news days of the year. Several people involved in the report said its release originally had been planned for early December, but after a behind-the-scenes debate in recent weeks about when to make it public, administration officials settled on Black Friday.

“This report draws a direct connection between the warming atmosphere and the resulting changes that affect Americans’ lives, communities, and livelihoods, now and in the future,” the document reads, concluding that “the evidence of human-caused climate change is overwhelming and continues to strengthen, that the impacts of climate change are intensifying across the country, and that climate-related threats to Americans’ physical, social, and economic well-being are rising.”

The report finds that the continental United States already is 1.8 degrees Fahrenheit warmer than it was 100 years ago, surrounded by seas that are on average nine inches higher and being racked by far worse heat waves than the nation experienced only 50 years ago.

But those figures offer only the prelude to even more potentially severe impacts. The report suggests that by 2050, the country could see as much as 2.3 additional degrees of warming in the continental United States. By that same year, in a high-end global-warming scenario, coral reefs in Hawaii and the U.S. Pacific territories could be bleaching every single year — conditions in which their survival would be in severe doubt. A record-warm year like 2016 would become routine.

Key crops, including corn, wheat and soybeans, would see declining yields as temperatures rise during the growing season. The city of Phoenix, which experienced about 80 days per year over 100 degrees around the turn of the century, could see between 120 and 150 such days per year by the end of the century, depending on the pace of emissions.

And those who face the most suffering? Society’s most vulnerable, including “lower-income and other marginalized communities,” researchers found.

In another major step, the authors of the new report have begun to put dollar signs next to projected climate damages, specifically within the United States.

In a worst-case climate-change scenario, the document finds, labor-related losses by the year 2090 due to extreme heat — the sort that makes it difficult to work outdoors or seriously lowers productivity — could amount to an estimated $155 billion annually. Deaths from temperature extremes could take an economic toll of $141 billion per year in the same year, while coastal property damages could total $118 billion yearly, researchers found.

Of course, mitigating climate change would also mitigate these damages, by as much as 58 percent in the case of high-temperature related deaths, the report finds.

The categorical tone of the new assessments reflects scientists’ growing confidence in the ability to detect the role of a changing climate in individual extreme events, such as heat waves and droughts. At the same time, increasingly sophisticated computer simulations now allow them to project future changes in highly specific regions of the country.

For many Americans, however, no simulations are necessary. The effects of climate change are already playing out daily.

“We don’t debate who caused it. You go outside, the streets are flooded. What are you going to do about it? It’s our reality nowadays,” said Susanne Torriente, who also reviewed the report. She is chief resilience officer for Miami Beach, which is spending hundreds of millions of dollars to adapt to rising sea levels. “We need to use this best available data so we can start making decisions to start investing in our future … It shouldn’t be that complicated or that partisan.”

The report is being released at the same time as another major federal climate study that, in contrast, actually reaches a rather more positive conclusion — at least with respect to what can be done about climate change.

The Second State of the Carbon Cycle Report, which examines all of North America (not just the United States), finds that over the last decade, greenhouse gas emissions from fossil fuels have actually declined by 1 percent per year. The result is that while North America emitted 24 percent of the world’s emissions in 2004, that was down to 17 percent in 2013. This has occurred in part thanks to improvements in vehicle fuel efficiency, the growth of renewable energy, and the swapping of coal burning for natural gas.

“For the globe, we’re still going up, but regionally, there have been these changes in how humans have been acting that have caused our emissions to go down,” said Ted Schuur, an expert on permafrost carbon at Northern Arizona University who contributed to the report, the follow-up to an initial effort released in 2007.

The report concludes that it appears possible to grow economies — at least for the United States, Mexico, and Canada — without increasing overall emissions of greenhouse gases. That would be a very important signal for the ability of the world to slow climate change over the course of the century. However, it doesn’t mean any lessening of climate change impacts within the United States. As long as global emissions continue, the risk of impacts here continue, because carbon dioxide circulates around the globe.

The release of the National Climate Assessment comes on the heels of other recent global warnings, most notably a report by the United Nations’ Intergovernmental Panel on Climate Change, finding that the world would have to make unprecedented changes in the next decade to remain below 2.7 degrees Fahrenheit (1.5 degrees Celsius) of total warming above preindustrial levels.

The last time a U.S. National Climate Assessment was published, in 2014, Obama administration officials took the document seriously, with top policymakers heralding its release and embracing its findings.

On the other side of the country, at least one well known atmospheric scientist this week was wrestling not with the contents of a climate report, but with the changing view from his own window.

“Normally, I can see San Francisco Bay from my home. Today and for the past few days, I could not see the bay for all the smoke from the Paradise fire. Fires that approach the size of the Paradise fire are most common in the hot dry years — the kind of years that we are likely to see many more of,” said Ken Caldeira, a senior researcher at the Carnegie Institution for Science.

“We are trained to be skeptical and resist jumping to quick conclusions, but looking at the smoke I could not help but think, ‘This is climate change. This is what climate change looks like.’”—