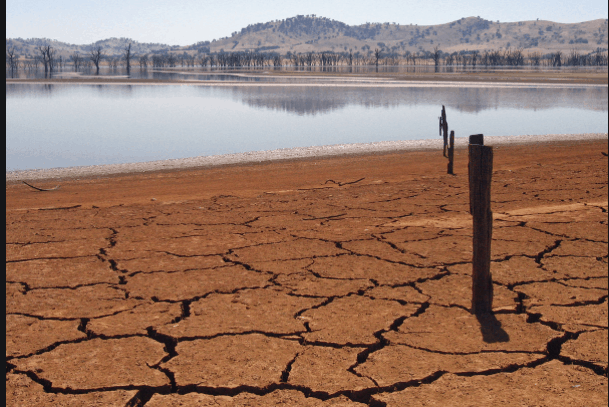 US farmers have not been able to get a break. First it was the Trade War that shows no signs of ending anytime soon, then this past spring was one of the wettest on record compromising millions of acres of US corn and soybean crops. Nevertheless, poor global demand and a generally non threatening global summer has kept prices of most agricultural commodities in a sideways to lower price trend.

The normal first frost date in the NW corn belt and northern plains is usually in late September. Hence, normally the temperature forecast you see above would not be a big deal for crops. However, a wet spring and cool summer could still jeopardize some 5-10% of the corn, and a smaller extent soybeans, in the areas shaded in blue (frost-freeze). This area will also see 30-50 mph winds later this week and some snow causing more havoc for far NW corn belt farmers.

Australia seeing a different plight– a once in 120 year drought

One of the worst standing Australia droughts in history occurred during an 8 year period between 1895 to 1903. These droughts had a devastating effect on Australia’s economy and resulted in more than 50% of all cattle and sheep being lost. Then came the droughts from 2001-2009 which devastated one community after another bringing dust storms, crop failures and brush fires. Now we have the present 3 year drought. What makes this more unusual than some of the other droughts in the past is the persistent of record high temperatures. This tells me that while droughts are nothing new for Australia, that climate change definitely has something to do with it. Please read an interesting article here about the super drought

From a climatological perspective, something we call a positive Indian Dipole has a high correlation with below normal rainfall in Australia as well as Indonesia. When this weather variable coincides with an El Nino, then these two phenomena’s together present the most dire consequences for Australia. Though El Nino is pretty much dead, the warming over the western Pacific (see map, below) represents that parts of the globe can still exhibit El Nino conditions. It is possible El Nino could make a comeback sometime in 2019 and contrary to what many other weather forecasters have been suggesting. The bottom line is that Australia may be in dire straights well into 2019.

My in house proprietary program CLIMATECH helps farmers, commodity traders, insurance companies and agribusinesses plan activities and make important financial decisions, months in advance. The program looks ahead as much as 5 months. If you are interested in receiving these kinds of maps on a weekly basis, please take this brief survey here.

You can see how a positive Indian Dipole (below) has dry weather risks (red) continuing for much of Australia, as well as Indonesia. While parts of northern Brazil also could become dry, currently , an improved rainfall outlook for Brazil coffee has been in my forecast the last 2 weeks. It may take more serious dryness in N. Brazil or Argentina this winter (their summer) to take grain prices out of the doldrums and help American farmers receive better prices.

The Indian Dipole by itself must be used in conjunction with other weather forecast techniques. Currently my biggest concern is for the continuing drought for Australia and possibly a worsening situation for Indonesia by winter or next spring. Cotton is normally planted in November in Australia, and this will be at least the 2nd straight year that lower acreage should result due to drought.