The Hottest Temperature Ever Recorded & What Is A Firenado? 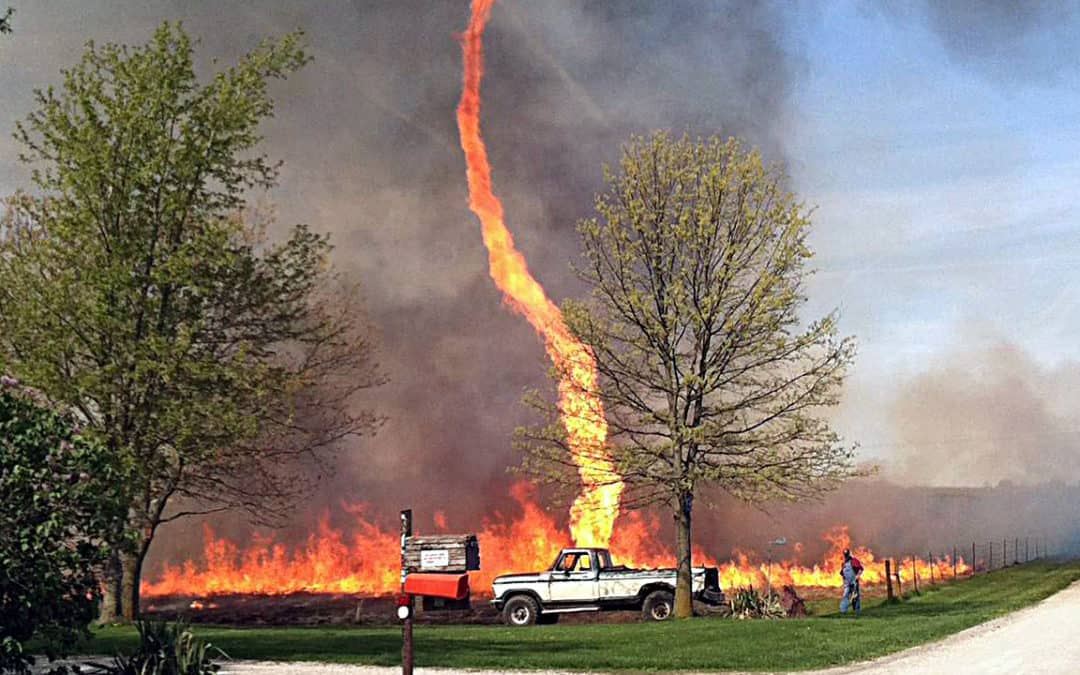 The Recent Record Heat In California

More signs of global warming continue to set numerous high-temperature records around the world. However, the extreme heat in California can also be due to something we call “negative Global Angular Momentum.” That’sa telltale sign of La Nina. The 130 high temperature this week is one of the hottest ever recorded on planet earth.

Firenadoes are an extreme weather phenomenon that can occur with rotating fire columns. A great video of one can be seen here.

The magnitude of the Firenado in California is one for the record books. For example, a fierce wildfire was burning north of Lake Tahoe and west of Reno, Nev., and has incinerated 31 square miles in less than two days and exhibited “extremely dangerous fire behavior. Check out this picture

Fires are particularly intense in areas with a fire tornado. The fire will have unpredictable movement in that area due to cross winds, so it’s dangerous for firefighters to be near that area.

While a fire tornado is not a true tornado, it does have the look of a tornado.

How Does A Firenado Form?

A wildfire drastically warms the air above it. This fired-warmed air rises. Then, the fire on the ground traces the rising air. Air is an ingredient for fire. This is why you blow on a campfire when you’re trying to start one — the air helps the fire ignite. As fire traces the rising air, it gets twisted by crosswinds.

Nearby mountains cause cross winds, which are winds blowing from different directions. These winds twist the fire-lined rising air so that it has the look of a tornado.

When you hear about fire tornadoes, there are nearly always mountains near the fire. Nearby mountains lead to winds blowing from different directions where the fire is happening. Plus, there’s always a lot of wind around wildfires to begin with.

Air rushes in (wind) to replace the warm air rising above the fire, and wildfires often happen on windy days. Air from the wind helps fuel the fire, and it helps move and spread the fire. Get all that air rushing toward the fire to twist, and you can see a fire tornado.

What May Be Causing the Historical Heat And Firenados In California?

If it were not for the fact that Siberia also saw record warm weather this summer and the planet as a whole has seen consistent global record heat (take Australia for an example, last year), I would say that global warming definitely has something to do with it. Carbon!!

However, as a scientist, it is also important to look at climatic footprints that can influence the weather and temperature thousands of miles a way. We call these foot-prints “teleconnections.”

One such teleconnection is called Global Angular Momentum (GLAAM). Presently, it is in a negative phase signaling that La Nina is probably forming. GLAAM has to do with torque in the atmosphere near the equator. For a better, very scientific definition of GlAAM, click here.

You can see above how with negative GLAAM, there tends to be a big heat ridge out west in California during August. The last time this happened was in the summer of 2001.

The last time anything close to widespread Firenados in California occurred, was back in 2001. Will 2001 or any other years in the past give us clues to forecast winter weather for the natural gas market, for South American corn, soybeans, coffee, and other commodities? This is what farmers and commodity traders around the world are asking me and I try to answer in my twice-weekly reports.

Will the Extreme Heat Ease in California?

The first map below shows the massive high-pressure ridge that will continue to bring forest fires and extreme heat to the west for at least another week. By later in August, one can see that the high temperature and the worst of the heat will be over with, as the ridge breaks down a bit.