Lungs of the earth are suffocating: Potential effects on hurricanes, Brazil and commodities 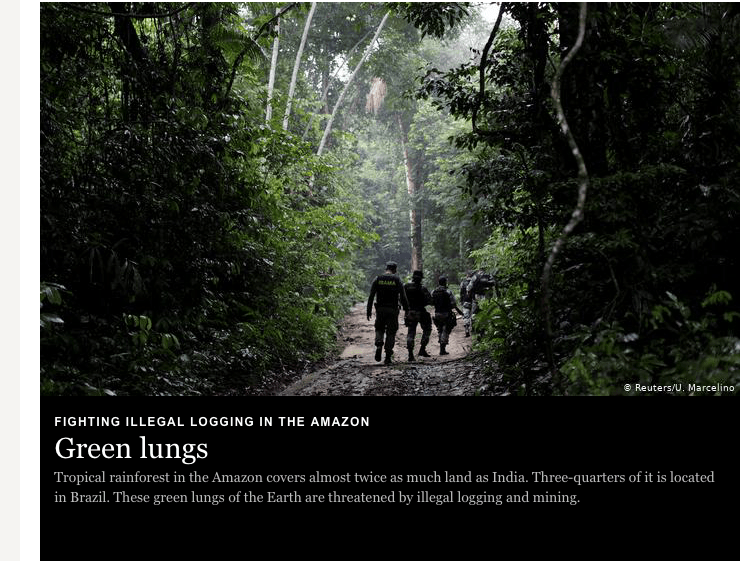 Often referred to as “the planet’s lungs” because it provides 20% of the world’s oxygen, the Amazon rainforest has been ablaze for weeks. You can see a disturbing video about it, here

While deforestation in the Brazil rain forest is nothing new, satellite photos and first hand reports reveal the situation is rapidly worsening. The main reason is the Brazil government and farmers want to expand cattle, soybeans and coffee acreage. But this is at the expense of destroying millions more acres of trees that typically absorb carbon dioxide and emit oxygen--“The Lungs of our Earth!” . See an interesting article about Brazil’s goal to expand it exports of cattle

According to 2017 statistics, Over the past 25 years, the agribusiness sector in Brazil has grown consistently, reaching a $80 billion trade surplus in 2017, while all other sectors combined accumulated a $55 billion deficit. In the same year, agricultural products accounted for approximately 45-48 percent of total exports and 20-22 percent of GDP according to the Ministry of Agriculture, Livestock, and Food Supply. Brazilian agribusiness is vital to Brazil’s economic outlook.

Brazil is today among the three most significant producers and exporters of food commodities in the world, and is the only tropical country among the leading agricultural producers. Brazilian meat is exported to more than 190 countries worldwide. The country produces four times as much beef as it did in the 1970s, and three times as much pork. Brazil is also the world’s leading exporter of coffee, sugar, orange juice, soybean, poultry, and sugarcane-based ethanol.

Given, the dismal state of the Brazil economy, they want to be the #1 supplier in the world in many agricultural commodities. Hence, their need to expand the production of crops and livestock.

NASA’s Earth Observing System Data and Information System (EOSDIS) Worldview application allows anyone to track fires around the globe using NASA satellite data. In Worldview, you can see the progression of fires in the Amazon and visible smoke over South America.

Brazil’s National Institute for Space Research (INPE) has so far detected 39,601 fires this year in the Amazon, as reported by The New York Times. While it is currently the dry season in this region, INPE reports that there has been a 79 percent increase in fires from 2018 during the same period.

“Not so long ago it was thought that Amazonian forests and other tropical rainforest regions were completely immune to fires thanks to the high moisture content of the undergrowth beneath the protection of the canopy tree cover. But the severe droughts of 1997-98, 2005, 2010, and currently a large number of wildfires across northern Brazil have forever changed this perception,” Carlos Peres, a biologist at University of East Anglia, said in a statement.

According to CITYLAB, “The forces behind this carbon catastrophe alive are manifold, and human-made: a combination of anthropogenic climate change, which catalyzed three once-in-a-century droughts in the past 15 years; a land-ravenous cattle industry, fueled by the West’s endless appetite for cheap beef; and Brazilian President Jair Bolsonaro, who’s rolled back environmental protections and allowed loggers to set fires with impunity. (An avid deforester, Bolsonaro has jokingly nicknamed himself “Captain Chainsaw.”) The weather has been dry, but INPE scientists told CNN that in all, 99 percent of the fires were the result of human actions, “either on purpose or by accident.”

The weak El Nino we had has been weakening even further. When this happens, shear in the Atlantic lessens, which can enhance the fall hurricane season. We have been seeing this happening in late August and early September. The first image you see shows the Ocean heat content and why Florida and perhaps part of the east coast this fall, could be under the gun from hurricanes.

There are also some tropical waves and potential hurricanes coming off the coast of Africa as we head deeper into September. However, it is possible that these storms will be less intense than the last couple of seasons for the Gulf Coast, including Texas and areas to the south such as Mexico, etc. due to African dust and dryness moving into the Atlantic from the Amazon. The images both above and below show the effects of Carbon from the Amazon and dust from West Africa.

Forest Fires in Amazon could enhance drought conditions for some agricultural commodities, but reduce hurricanes for Texas/Mexico

My in house weather forecasting program CLIMATECH (below), uses teleconnections such as El Nino/La Nina, and ocean temperatures and weather patterns thousands of miles away to predict weather months in advance.

CLIMATECH reveals a bit more about the dry conditions over the Amazon, prior to hurricane Dorian. You can see for the month of August how dry it has been in the Atlantic (red=below normal rainfall), and that dryness may protect the southern Gulf, Cuba, Puerto Rica and potentially the Yucatan peninsula from hurricanes this fall.

The effects of deforestation on climate, in my opinion, is at least as influential as solar activity on the sun. However, rarely anyone ever talks about it. The dialogue should have started years ago and more pressure needs to be put on countries like Brazil to foster much greater concerns about the health of humanity and our planet.

The next question for commodity traders will be, whether Brazil coffee and soybean regions will see drier spring/summer weather that could take some of these markets out of the doldrums later this year. Right now, the world is awash in both soybeans, coffee and for that matter, many other commodities. Gold and silver have been the lone shining light in the commodity world, brought on by global economic fears and low interest rates in Europe and the United States.

Brazil being one of the top three biggest producers of agricultural commodities in the world, could see their mission of expanding its share of the world agricultural market “back fire”. This could happen if carbon, dust and debris from these forest fires builds a potential dry ridge this fall and winter (Brazil spring/summer), which some computer models are beginning to show.

The map above shows the potential mid September jet stream pattern over South America. The ridge (H) you see is what we call a “blocking high pressure system” that potentially could reduce rainfall heading into the Brazil spring and summer for some crops. There is much debate and concern that the demise of the Brazilian rain forest saps water vapor out of the atmosphere and can potentially threaten crop production. However, there are other climatic factors too that can influence global weather patterns. These are the demise of El Nino and climatic patterns thousands of miles a way. Stay tuned, because if commodity prices such as soybeans, coffee or sugar bottom in the next few months from production issues in Brazil, it could be due to the destruction of the Amazon, more than anything else.–Jim Roemer