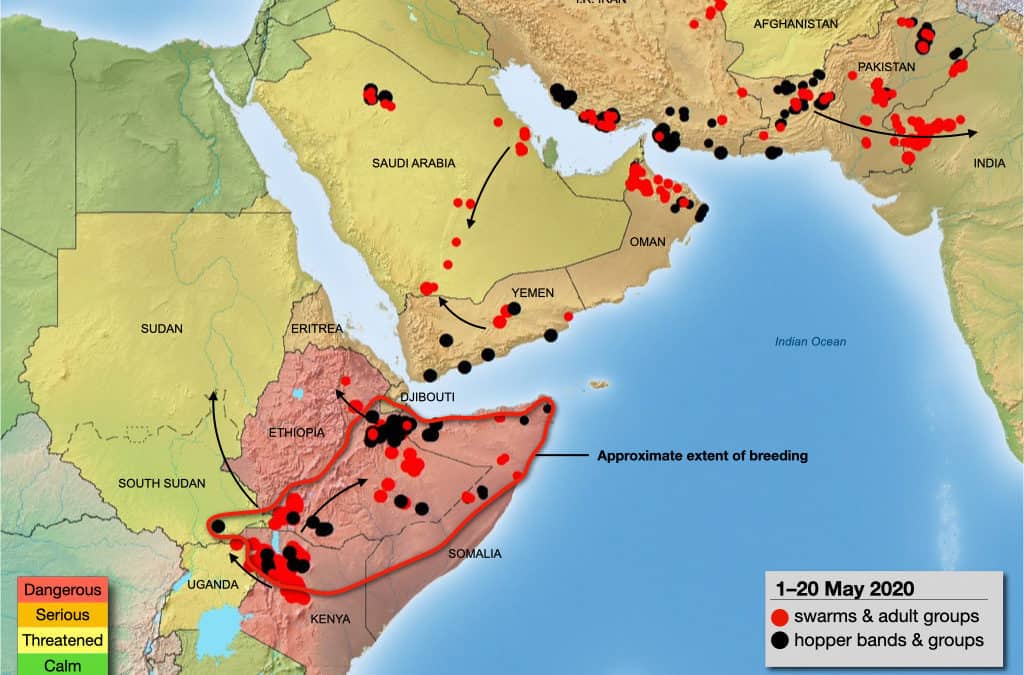 On May 11, India announced that locusts had been found in 15 Rajistani districts on the Pakistan border. This week the pests flew further inland, leading the state agricultural department to spray swarms in central India’s Madhya Pradesh. Locusts already menace crops and livelihoods in 23 other countries from Tanzania to Pakistan.

The UN’s Food and Agriculture Organization (FAO) and the World Food Programme described this year’s outbreaks, which started in Africa, as “…unprecedented in modern times.” On May 20th, the World Bank pledged US$500 million to combat the locusts and the impacts of their destruction.

Where the Bugs Are Headed

The swarms are already in East Africa, the Middle East, and Southwest Asia. Experts say they may reach West Africa by June but their arrival depends on the winds and rain. Up to 42 million people in East Africa and Yemen alone face food insecurity and insects moving west will add more. Yemen’s war made it a breeding ground, while locusts also continue to reproduce in Iran. The country had no swarms in the previous 50 years. Affected provinces make up Iran’s breadbasket and locusts could impact food security for one-third of the country’s population.

While not at great risk, even China exhorted its southern provinces like Tibet and Yunnan to be on alert. The country’s leaders fear that the swarms will make their way north from India and Pakistan if not contained.

The India-Pakistan Border Is a Breeding Ground

FAO forecasts that rains on the India-Pakistan border in June could protect India somewhat. The wet weather may encourage the locusts to remain and lay eggs, rather than move across the Indian plains.

However, locust season usually runs from July to October in India, and swarms are unusual there. Taking no chances, the country issued warnings for Rajistan’s neighbor Punjab and other provinces in recent weeks. Punjab is India’s third most productive rice-producing state and also grows a significant amount of cotton. Small locust outbreaks already occurred along the state’s border with Pakistan in January. Gujarat also shares the border with Pakistan and is India’s largest cotton-producing state. This week Gujarat reported small swarms, but Indian agricultural officials declared the situation was under control.

That some crops are between seasons or not planted yet plays in India’s favor. The current swarms in Africa grow to tens of square kilometers, with 40 to 80 million insects per square kilometer. Since a locust chomps through its weight in food each day, a swarm easily decimates fields. A one square kilometer swarm eats the same amount in one day as 35,000 people.

The current locust outbreak is the biggest in some countries for 70 years. Favorable breeding conditions through May could bring new swarms when harvests begin in June and July in some countries. The National Oceanic and Atmospheric Administration (NOAA) and FAO this week announced a web app to forecast the insects’ path. Using NOAA wind data, the app predicts a swarm’s location at five-minute intervals up to seven days in advance. FAO uses the app to help countries to develop an effective strategy for deploying resources against the locusts.

Unfortunately, some fear certain agriculture departments may need the app permanently, since the wet conditions that bring locust swarms may become more frequent. In 2019, warming waters in the Indian Ocean brought eight tropical cyclones to East Africa. The average season brings one or two.

Keith Cressman, FAO’s senior locust forecasting officer told National Geographic that, “…we can assume there will be more locust outbreaks and upsurges in the Horn of Africa.” FAO predicts that, in a worst-case scenario, locusts could impact the livelihoods of one-tenth of the world’s population.