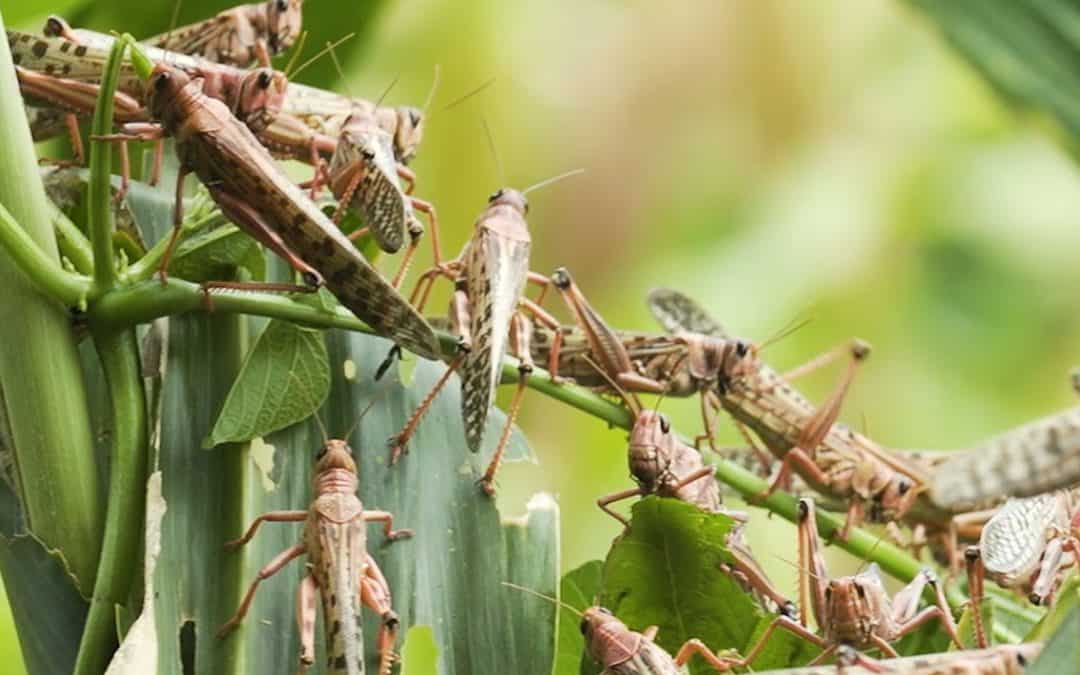 Locusts have plagued farmers for millennia. According to the Book of Exodus, around 1400 B.C. the Egyptians experienced an exceptionally unfortunate encounter with these ravenous pests when they struck as the eighth Biblical plague. As Exodus describes, “They covered the face of the whole land, so that the land was darkened, and they ate all the plants in the land and all the fruit of the trees that the hail had left. Not a green thing remained, neither tree nor plant of the field, through all the land of Egypt.”

But the locust attacks of late can at least be partially explained by the weather. From Pakistan to the Sudan of Africa, locusts amount to one of the worst plagues in generations. It is putting 20 million people at risk of starvation. This could end up being a humanitarian crisis. Billions of these critters have gathered into a thick sort of “blizzard”.

In northern Kenya, locusts have stripped grazing pastures and destroyed the lives of thousands of cattle ranchers. From Tanzania to Uganda, nations that already have huge food security risk, are seeing the worst swarm since 1944.

A video of the current locust situation can be seen here.

In my opinion, the cause of the current locust plague is partly due to the weather. Flooding rains have hit Oman, Yemen and Somalia the last two years. Compounding the floods with the warming climate has created perfect breeding conditions.

The swarms are so large that traditional methods of pest control have been inefficient in resolving the problem.

Rainfall the last three months in Eastern Africa has been 200-500% above normal. This is aggravating the locust situation.

Let’s not forget the mission of these Best Weather blogs. We always seek the connection between weather and commodities. In the case of the locust plague, essential commodity crops have been destroyed.

However, the other side of the coin is that locusts are food, as well. According to Livestrong.com, “Locusts are actually the swarming phase of short-horned grasshoppers. They breed rapidly and become very social and migratory.  Locusts are one of many species of insect considered edible, and they are prepared in numerous ways, ranging from dried to smoked to fried.”

According to the book “Insects” by Steve Parker, species of locusts vary in protein content from about 50 percent of dry weight to almost 60 percent, making them denser in protein than cows.

Have ready about 2 liters of vegetable stock (or 10 cups) with a little turmeric added to it.

Throw the locusts in the boiling stock, whole. Cook for about 3 minutes.

Drain the locusts and let them cool somewhat.

Twist off their heads: this will also pull out the black, threadlike viscera.

Remove the wings and small legs.

Make a seasoned flour with 4 tablespoons any  flour, 3/4 teaspoon salt, a little pepper and chili powder, a shake of ground coriander, and dried garlic granules.

Roll the pre-cooked locusts in a beaten whole egg, then roll them in the seasoned flour. Shake excess flour off.

Fry in olive oil for 1 1/2-2 minutes, until the color turns golden brown.