El Nino lowered from “likely” to only a “watch” 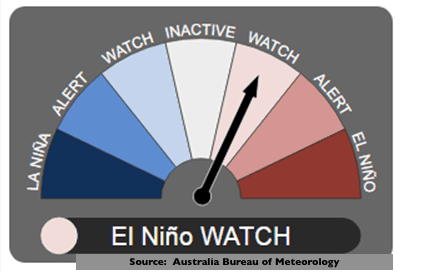 Huge waves off the California coast; developing dryness for Brazil soybeans and coffee; heavy rains in Argentina following a La Nina type drought a year ago and Australia seeing some of the worst water shortages in over 40 years. These are normally all tell-tale signs of El Nino.

These weather events described above have been due, in part, to very warm ocean temperatures in the equatorial Pacific–typical of an El Nino. However, in reality, an official El Nino has never really actually formed. Something I have been touting for 6 months!This will have big implications on global weather in the weeks and months ahead.

The charts below describe why I personally, have not been calling for an official El Nino over the last 6 months. Now we are seeing the Australian Bureau of Meteorology lower the chances of an El Nino, from a 70% chance to only an “El Nino” watch. Other firms should follow soon.