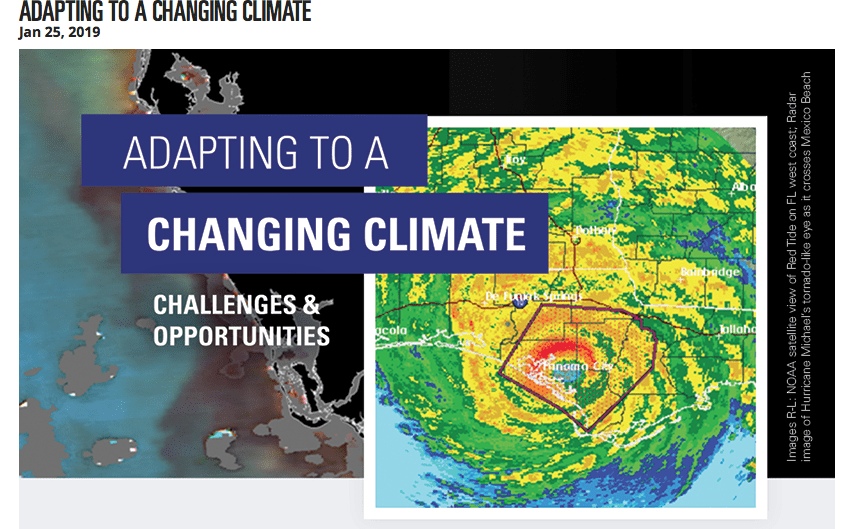 Last spring, I put out a weather forecast, that I felt that the 2018 hurricane season would be less active than usual. One main reason for this forecast was due to model predictions that El Nino would form, which normally shears out tropical systems before they become giants. In addition, cool waters to the west of Africa (which has resulted in record large cocoa crops in Ivory Coast and Ghana, helping to send chocolate prices in the tank this last year), tends to limit tropical wave formation. As we all know however, Hurricane Florence and Michael formed and caused major devastation once again. The reasons for more intense and frequent storms are up for debate, but global warming “may play a role.” This last summer and fall, part of the factors that formed Florence and Michael were because El Nino did not formed and something we call the loop current was warmer and stronger than originally predicted.

I have been forecasting hurricanes for 25 years , as farmers, hedge funds and others have depended on my forecasts. But this last summer, I was initially a bit fooled. The loop current was a main reason that hurricane Michael got so intense, so quickly.

Much more detail about hurricane formation, climate change, etc. will be discussed on January 25th, here in Sarasota. Please register for only $50-lunch included.

Here are excerpts from an article posted on the Cumberland Advisors web site regarding Climate Change, hurricanes and the upcoming conference–Jim Roemer

Bob Bunting will be a keynote speaker at the January 25th GIC-USFSM conference, Adapting to a Changing Climate: Challenges & Opportunities, to be held at the University of South Florida Sarasota-Manatee.  He is one of the organizers.  He was a speaker at the previous conference on this topic and explained why we need to thank the mountains in Cuba for saving us from a catastrophic cat 5 hurricane hit. The conference presentations lineup can be seen here: http://usfsm.edu/climate

Last year was a September to remember in the US as far as hurricanes go. First, Harvey hit Texas with 130-mph winds and thundering rains totaling up to 60 inches in places, setting all-time US rainfall records. Next, Irma created havoc across the Caribbean and Florida as the strongest Atlantic hurricane on record, with 185-mph sustained winds that leveled islands and nearly created a nightmare scenario in Florida. And of course no one will forget Maria, which hit an ill-prepared Puerto Rico with catastrophic results.

Here are some recent pieces in which Cumberland Advisors in Sarasota describes the effects of these hurricanes:
https://www.cumber.com/key-west-bob-bunting/
http://bobsstocks.com/cuba-caribbean-hurricanes-now/
https://www.sarasotamagazine.com/slideshows/2018/7/1/how-cuba-saved-florida-from-a-category-5-hurricane

From June through August the 2018 hurricane season yielded a slightly elevated number of storms, but all were weak. Elevated wind shear, a near-record cold Atlantic Ocean, and Sahara dust clouds combined to lull us to sleep – that is, until Florence formed in September off the African coast, just as Irma had. This time the track was more northwest, across thousands of miles of open water. Finally, Florence hit a patch of warm water, found low wind shear, and fought off the dust. The result was the first major hurricane of 2018 and one that had a clear shot at the Carolina coast.

Packing 140-mph winds after a 24-hour cycle of super-rapid intensification, Florence was not a storm to discount. The Carolinas are a magnet for Atlantic hurricanes: Think Hazel, Hugo, Gloria, and Donna, among others. But what made Florence even more of a threat was both human denial and the natural slope of the continental shelf, which is shallow and thus amplifies storm surge, especially for storms coming into the coast at right angles. Usually storms approach from the south, not from the east. It makes a difference. Florence came in perpendicular to the coast and acted much like a plow pushing the water at the coast, creating a large storm surge even as the storm itself weakened, striking with top winds of 106 mph.

Like Harvey, this massive storm ground to a halt just as it was making landfall. As with Harvey, record rains pelted North and South Carolina for days, dumping trillions of gallons of water on ground already saturated from a very wet summer. With storm surge and 30+ inches of record-setting rainfall, epic flooding resulted. Many rivers crested at levels that are hit only in a 1000-year flood, inflicting widespread major flooding that continued for weeks and killed not only people but millions of animals, creating billions in losses.

Finally, it was October 2018, and many began to think we were done with hurricanes. After all, at this point, although there had been many weak tropical storms and hurricanes, there had been only one major storm, and now Florence was out of the news.

Back in June, the Sarasota magazine published a nice summary of hurricanes, and I was pleased to be part of the spread of articles. Here is an excerpt from the discussion of Sarasota and hurricanes:

“Sarasota is more vulnerable to storms – like Wilma or Charley – that form in the Caribbean and enter the Gulf of Mexico, usually early or late in hurricane season. (The most perilous time for us, Bunting says, is the first two weeks of October.) But even those storms rarely hit our stretch of the west coast. Because of the shape of Florida’s land mass and atmospheric factors related to the rotation of the earth, they tend instead to make landfall to the south, often around Naples, and travel east across Florida, or to curve north and hit the northern Gulf Coast.

“Does this mean we can breathe easy? Hardly, says Bunting, who confesses, ‘I couldn’t sleep’ during the days that Irma threatened our coast. ‘All it takes is one,’ he says. ‘Only one.’”

You can read the entire article(s) here: https://www.sarasotamagazine.com/articles/2018/6/27/major-hurricanes-rarely-hit-our-region-here-s-why

Sure enough, in the second week of October a weak tropical system emerged south of Cuba, in the area climatologically favorable for late-season hurricane formation. This worrying development was made even more scary by a very warm loop current in the Gulf of Mexico, which was moving warmer than normal sea-surface temperatures off the West Florida Centennial Shelf northward to a position near the Big Bend region of Florida. Tropical Storm Michael entered the Gulf, and as it moved almost due north, it began to strengthen.

At first a Category 1 hurricane, Michael soon sucked energy from the warm loop current and intensified with a bang! During the next 24 hours the storm churned northwest of Sarasota toward Mexico Beach in northwest Florida. The Category 1 storm exploded to a very strong Category 4 with 155-mph winds; and the eye wall, surrounding a pinpoint eye, struck Mexico Beach and surroundings like a large tornado, complete with a storm surge. Wiping the Earth’s surface clean at the impact point, Michael registered the third lowest pressure ever recorded in the eye of a US hurricane making landfall – 919 mb. Imagine the panic of people watching the radar images like the one below as the storm approached the beach.

Once again, please attend this conference in Sarasota on January 25th. Sign up is only $50 for what promises to be a great event with wonderful speakers and should be “eye opening” of what the real facts are about Climate Change. Register here