The Ski Season So Far. Where to go in March? Atmosphere Acting Like an El Nino 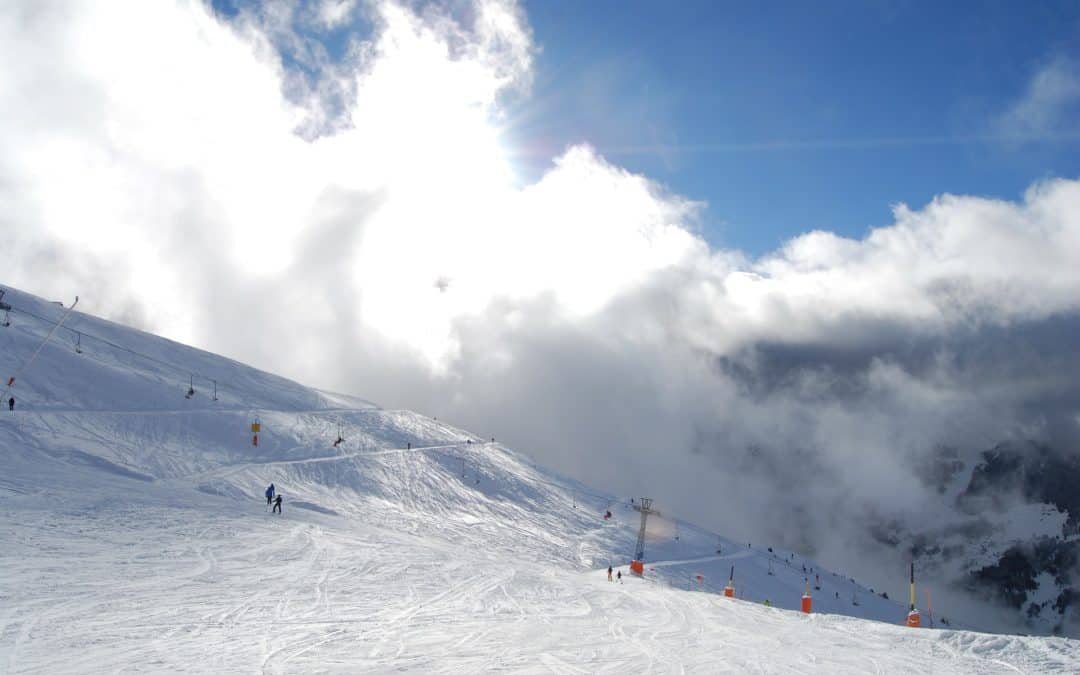 A look at Ski Conditions in the U.S.and Canada So Far This Winter. Big Snows out West, Tell-Tale Signs of El Nino again. 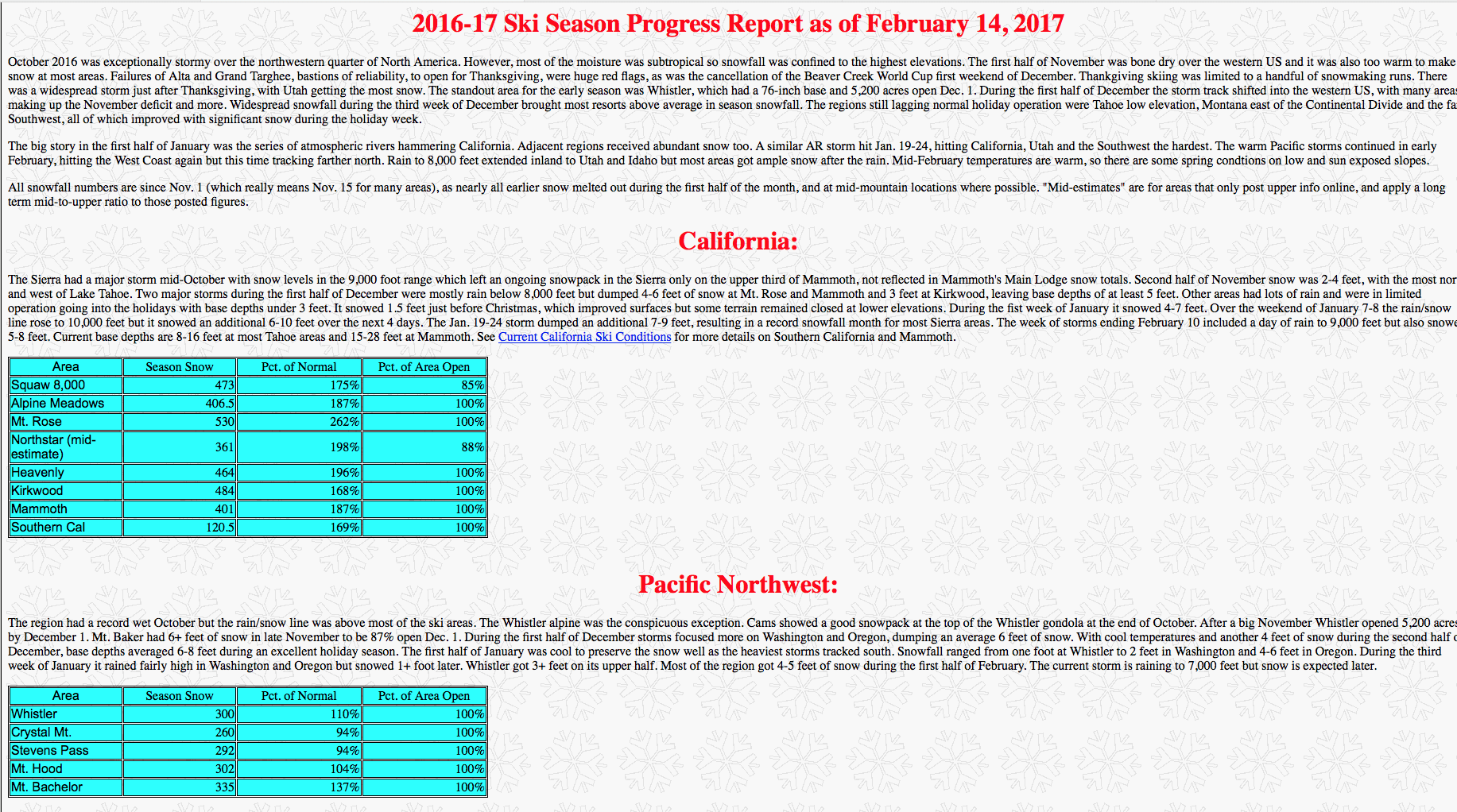 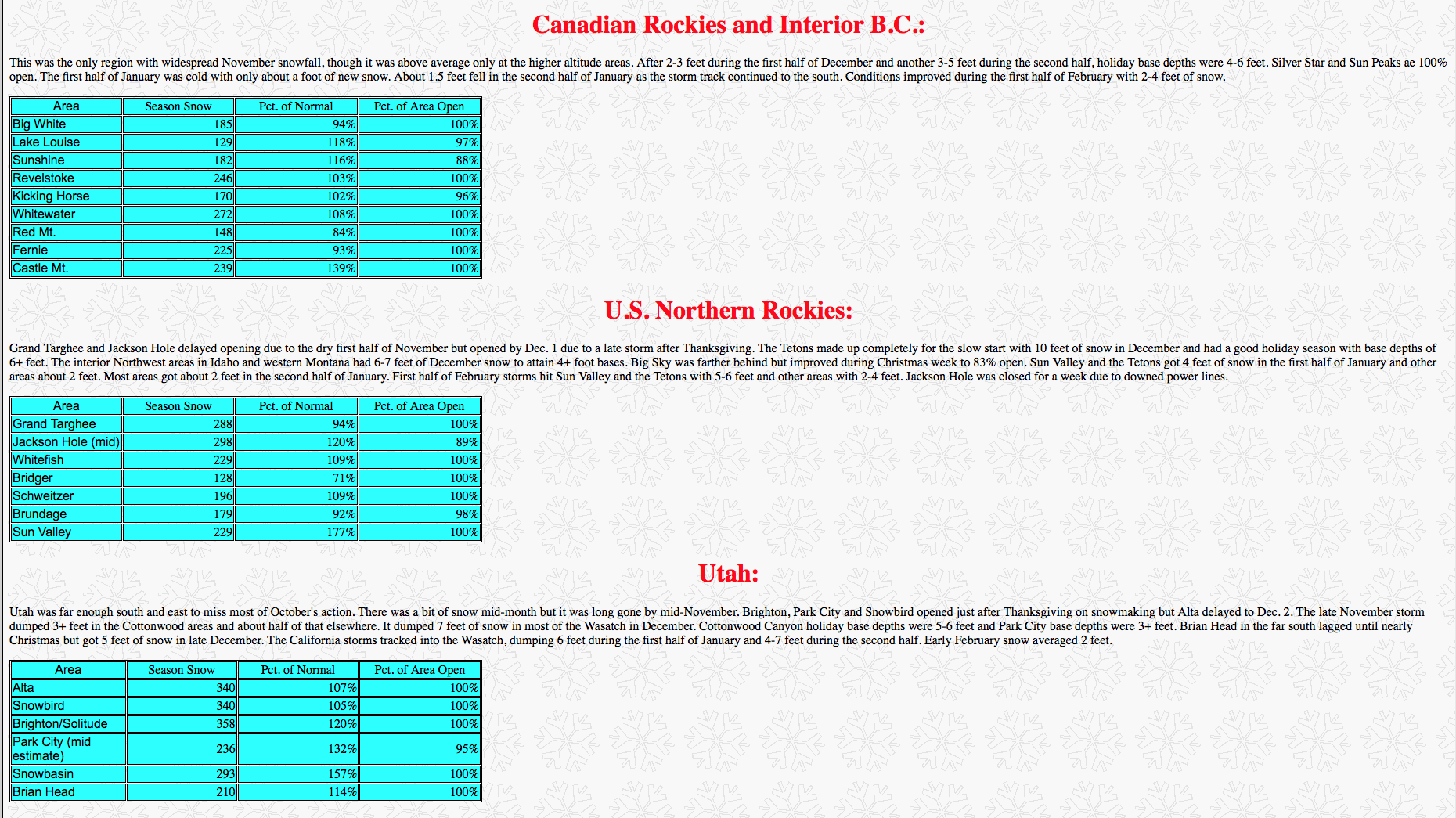 After a late start, snowfall has been abundant across the western U.S. skiing areas the past few months. Snowbird Mountain Resort’s YTD total so far is a whopping 358″.  Over the past 30 years, their average total snowfall by the end of February has been 284″.  Hence, a 70″ surplus is guaranteed by the end of February 2017. However, this is likely underestimated, as several more feet of powder are the forecast for this week.  On the other side of the country, recent storms have helped turned the tide in the battle for a recovery season after the snow drought of 2015/16.  New powder arrived just in time for skiing glades, snowshoeing and snowmobiling around Valentine’s Day.  Consequently, many couples staying at bed & breakfasts and mountain lodges in Vermont enjoyed the fresh snow.

To see video go to www.snowbird.com 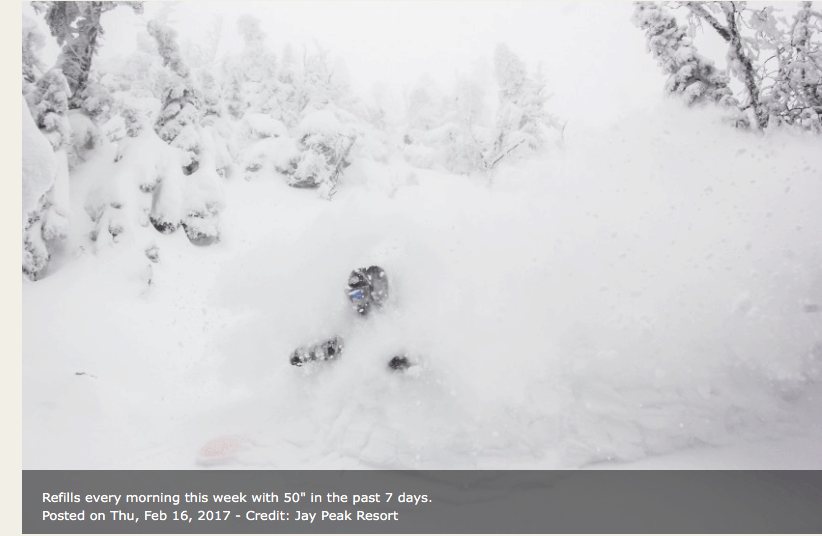 The drought is over in California with some historical rains and snows both beneficial and a detriment out west. Feet more snow is coming to the West through the beginning of March. The big time snows in northern New England will turn a bit icy with freeze-thawing the next 10-14 days as ski resorts in Vermont to New York and New Hampshire see day time highs climb well into the 40’s and 50’s at times. This will mean freeze-thawing and a lot of the power gone shortly. However, most studies and the chart we show below suggest a potential improving weather pattern for Northeast ski resorts and colder weather after about March 7th. The odds seem to favor a colder than normal March after that time which could mean good news for New England ski resorts.

As a result, you might be thinking “Ok Matt I get it, conditions are perfect. I’ve heard it all about it from my co-workers and family members.  Enough is enough! Therefore, I’m booking my trip for the spring.  Should I venture to the Northeast or risk the ‘Oregon Trail’ and head to the powder of the West? Where will I get more snow for my buck?” 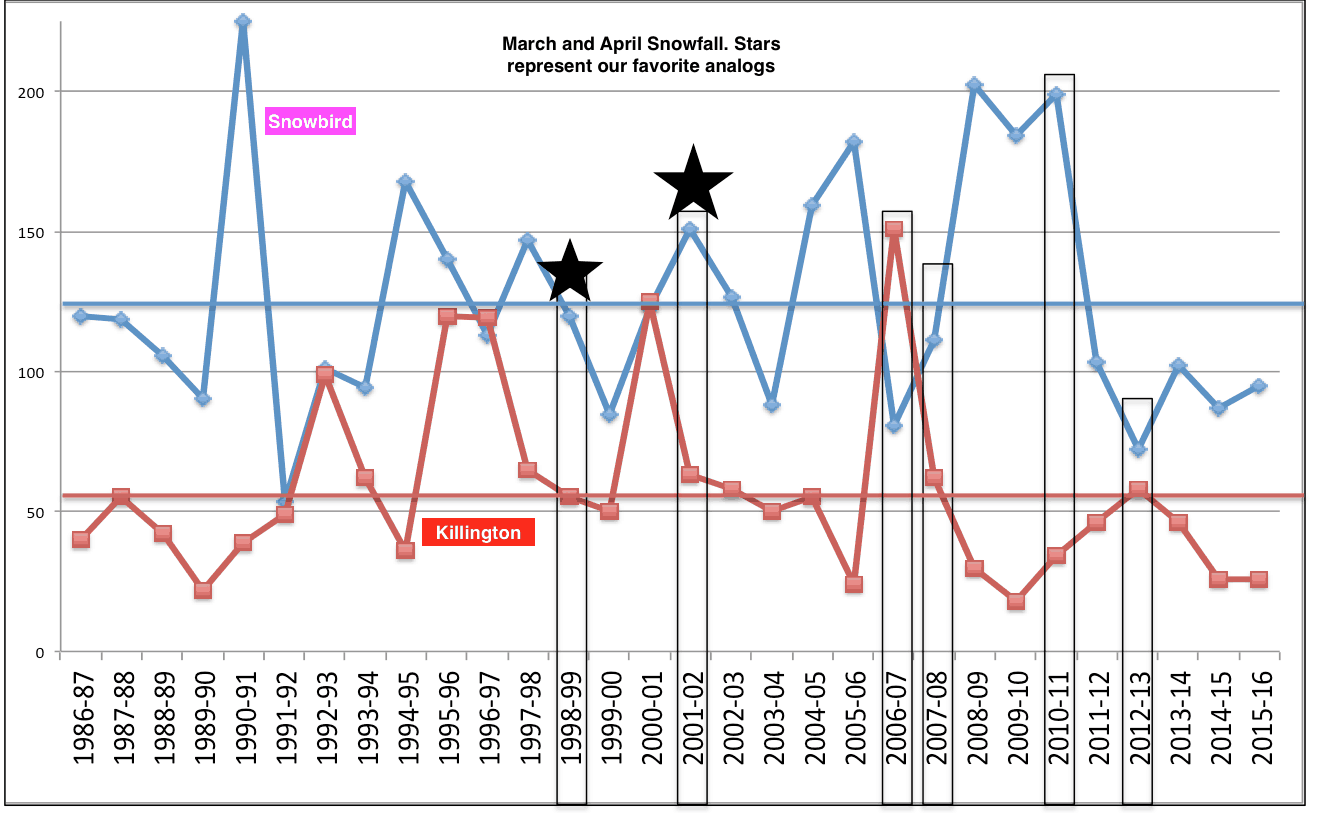 To answer this, we took a gander at the historical late season snows for two mountains: Snowbird, Utah and Killington, VT.  The late-season snowfall totals  for the past 30 years (March-April) are shown in the image below.  In addition, the average for Killington (Snowbird) is the flat red (blue) line.  The years with black boxes highlight some of the analogs we’ve used to forecast the 16-17′ U.S. winter.  These years are a mix of our sea ice analogs, +AMO, +NINO12, and +QBO.  These are teleconnections. which help us forecast long range weather.

The chart above shows our favorite analog years and projected March-April snowfall.  1999, 2002, 2007, 2008, 2011, 2013 appear like the best analogs. However, when looking, for example at which of these years had incredible California snows and places like Snowbird already having more than 330″ of snow by early February, the spring of 2002 appears the best. You can see from the chart above that Snowbird had close to 150 inches of snow in March and Killington about 55 inches. While not written in stone (timing could always be a week or two off), this does suggest incredible snows still in Utah the next month or so. After freeze-thawing in New England the next 12-15 days, conditions could improve the last half to two-thirds of March for many New England ski resorts

March Temp forecast (below). After a record warm February for much of the U.S., somewhat colder weather can be expected later. 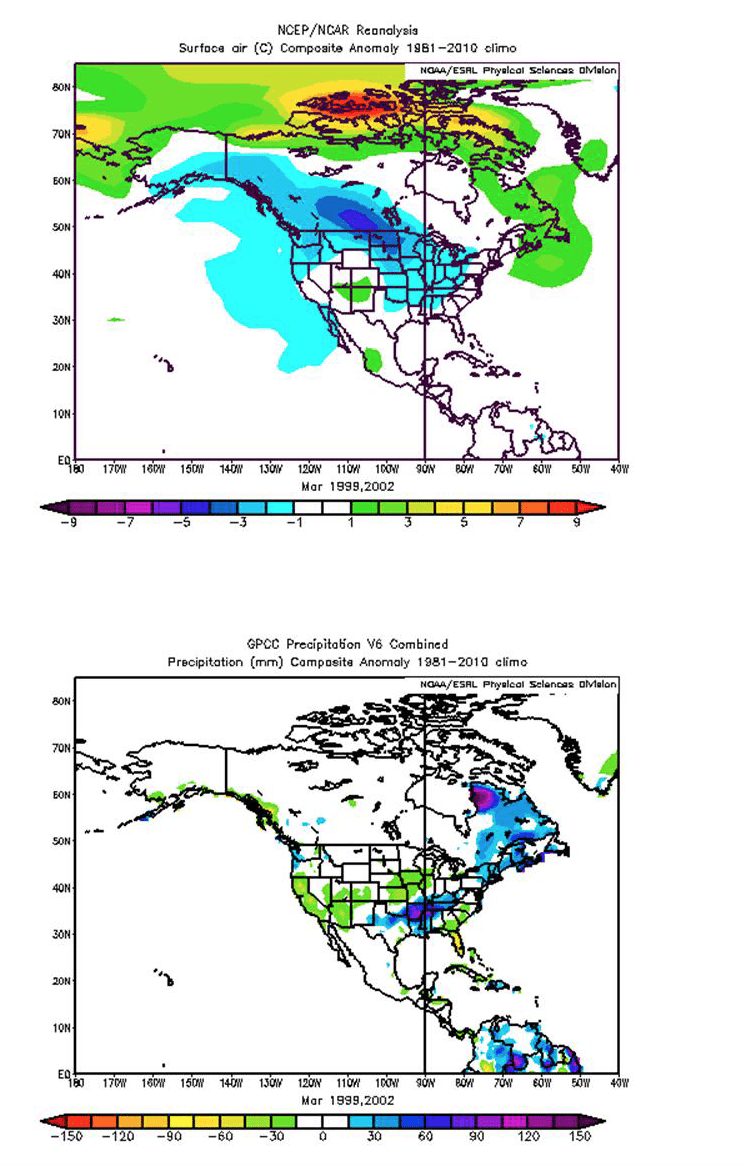 Comparing two of our favorite analogs—-notice the colder than normal outlook in March (top map) and above normal moisture over New England. This is at the surface, not 5,000-10,000 feet up. Hence, for example, the higher elevations such as Snowbird should get great snows into March, even though this map shows below normal snowfall in green. The blue represents above normal precipitin and possibly in the form of good snows in New England, following freeze thawing the next 2 weeks.